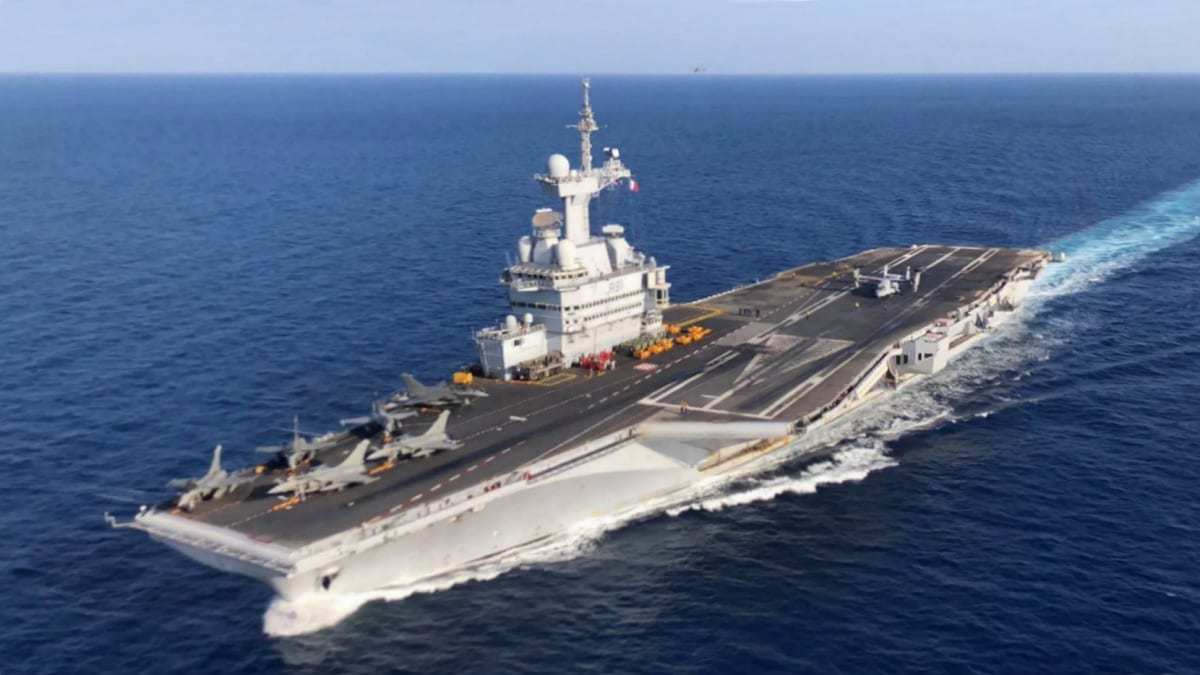 190424-M-BP588-1005 U.S. 5TH FLEET AREA OF OPERATIONS (April 24, 2019) A U.S. Marine MV-22 Osprey assigned to the 22nd Marine Expeditionary Unit sits on the flight deck of France's Marine Nationale aircraft carrier FS Charles De Gaulle (R 91). This was the second time that Ospreys have landed aboard the French vessel. Marines and Sailors assigned to the 22nd MEU and Kearsarge Amphibious Ready Group are currently deployed to the U.S. 5th Fleet area of operations in support of naval operations to ensure maritime stability and security in the Central region, connecting the Mediterranean and the Pacific through the western Indian Ocean and three strategic choke points. (U.S. Marine Corps photo by Maj. Joshua Smith/Released)

During a visit to Framatome, the defense firm that will be manufacturing at least some of the PANG, Macron stated that France’s “strategic future, our status as a great power, lies with the nuclear industry.”

The PANG will be France’s 11th aircraft carrier and its largest. Although France had initially considered building a conventionally-powered carrier, nuclear power was chosen due to the superior capabilities it could support.

Along with the United States, France is the only country in the world with a nuclear-powered aircraft carrier in service. And although the United States’ nuclear flattop fleet dwarfs that of France at 11 to one respectively, France is indeed a member of a very exclusive club. Macron acknowledged how important the PANG would be to the French Navy, stating that, “by these choices, we confirm France’s desire to preserve its strategic autonomy.”

France will invest an initial 1 billion euros in the PANG project, though costs could ultimately balloon upwards to 5 billion euros, or just over $6 billion, Reuters reported. This pales in comparison to the United States Navy’s latest nuclear-powered aircraft carrier, the Gerald R. Ford, which has an estimated sticker price of $12.8 billon.

The PANG is estimated to be 940 to 970 feet long, with a displacement of 70,000 to 75,000 tons, making it the largest ship ever built for the French Navy. Though the PANG’s top speed will be similar to that of the Charles de Gaulle, it will carry the Next-Generation Fighter, a planned stealth fighter being jointly developed by France, Spain, and Germany.

PANG will also have three electromagnetic catapults built by the American firm General Atomics, modified versions of the same system used on the Gerald R. Ford-class, as well as advanced arresting gear, again built and designed by GA.

Hopes are high for France’s second nuclear-powered carrier. Charles de Gaulle’s rollout was rather protracted and marred by breakdowns. In addition to a period of radiation leakage, propeller breakdown and unusually high operating noise hampered mission readiness — problems that the PANG will try to avoid.

It should be stated that much of what the PANG will look like once finalized remains somewhat speculative, as work on the massive carrier has yet to start — the initial steel cutting ceremony is scheduled for 2025. We hope to have more on this important topic is events develop.