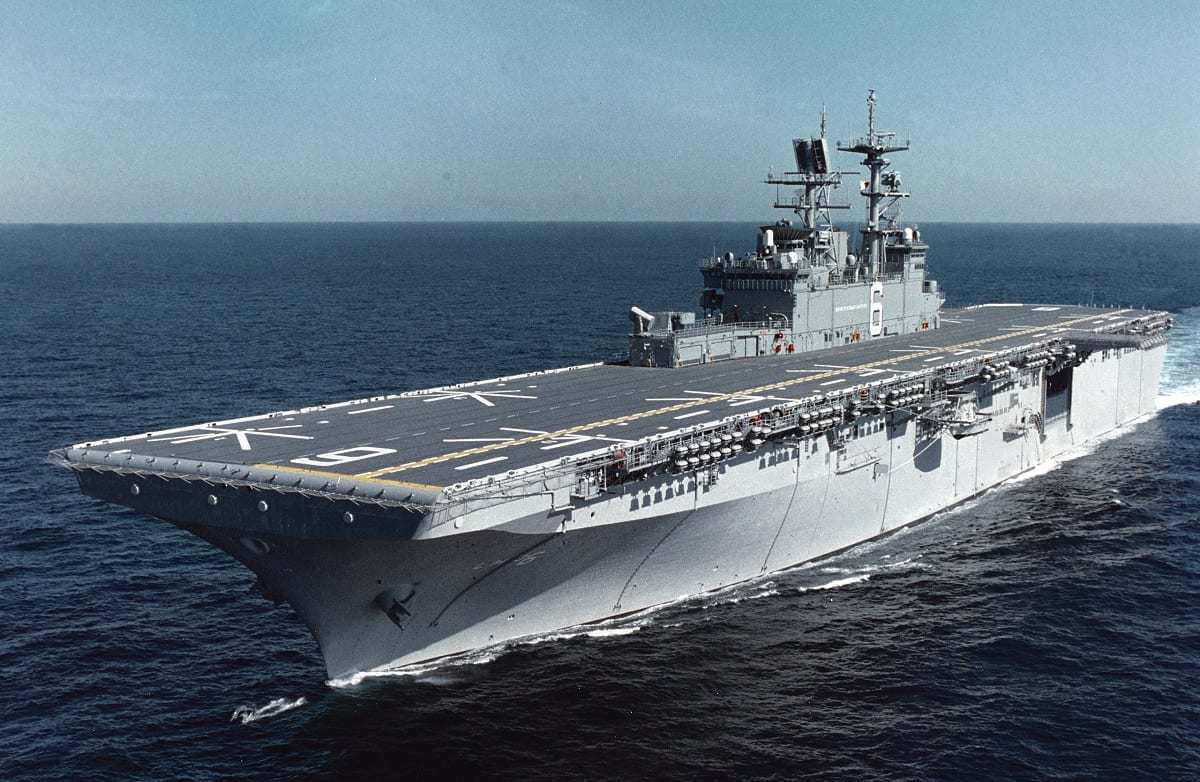 The U.S. Navy amphibious assault ship USS Bonhomme Richard (LHD-6) underway in the Gulf of Mexico during builder's sea trials, circa in early 1998.

The U.S. Navy’s Bonhomme Richard, a Wasp-class amphibious assault ship, caught fire in mid-July while at port in San Diego while undergoing routine repair and maintenance–and most likely will never set sail again.

Though the exact cause of the fire has yet to be concretely determined, U.S. Navy officials stated that the fire was not caused by electrical problems, hazardous materials, or oil, classifying it rather as an Alpha Class fire, started by combustibles such as paper, textiles, or possibly wood. Although Navy officials said that no ordnance was onboard at the time of the blaze, a loud explosion was heard, perhaps caused by a rapid release of pressure that built up because of the inferno.

Why the Navy Decided to Scrap

In a U.S. Navy press release, the Secretary of the Navy, Kenneth J. Braithwaite, explained that decision to scrap the Bonhomme Richard was a tough choice to make, stating that, “following an extensive material assessment in which various courses of action were considered and evaluated, we came to the conclusion that it is not fiscally responsible to restore her.”

Damage to the amphibious assault ship was catastrophic. The fire raged for more than four days inside the ship, with the flight deck and hangar deck suffering damage, as well as the storage areas for fuel and munitions potentially damaged beyond proper repair. The Navy’s efforts to put out the blaze may have also caused damage to the ship.

After the blaze was successfully put out, a Naval damage assessment estimated that it would cost over $3 billion and five to seven years to repair the ship to its pre-fire configuration, and over $1 billion to repair and reconfigure the ship for a different role. Both of these numbers greatly exceed the ship’s original $761 million price tag. Instead, the ship will be scrapped, and spare parts salvaged where possible.

SAN DIEGO (July 12, 2020) The U.S. Navy amphibious assault ship USS Bonhomme Richard (LHD-6) on fire at Naval Base San Diego, California (USA), on 12 July 2020. On the morning of 12 July, a fire was called away aboard the ship while it was moored pier side at Naval Base San Diego. Base and shipboard firefighters responded to the fire. Bonhomme Richard was going through a maintenance availability, which began in 2018. The fire was extinguished on 16 July.

The Bonhomme Richard was commissioned in 1998 and named in honor of Benjamin Franklin who had served as the American Ambassador to France. In the wake of the September 11th attacks, the  Richard sailed to the Persian Gulf, supporting Operation Enduring Freedom and later Operation Iraqi Freedom. A full ship’s complement included about 102 officers and 1,000 sailors.

The cause of the fire remains undetermined, though the Navy’s Naval Criminal Investigative Service (NCIS) suspect the cause might be attributable to foul play. NCIS is said to have investigated one sailor in connection with the suspected arson, searching the still-unnamed sailor’s property and home, a San Diego-based ABC News affiliate first reported.

The Bonhomme Richard had recently undergone modernization that allowed the ship to support Marine F-35B operations, and the loss of the Richard will likely set back the Marine’s F-35B rollout.

Caleb Larson is a Defense Writer with the National Interest. He holds a Master of Public Policy and covers U.S. and Russian security, European defense issues, and German politics and culture.