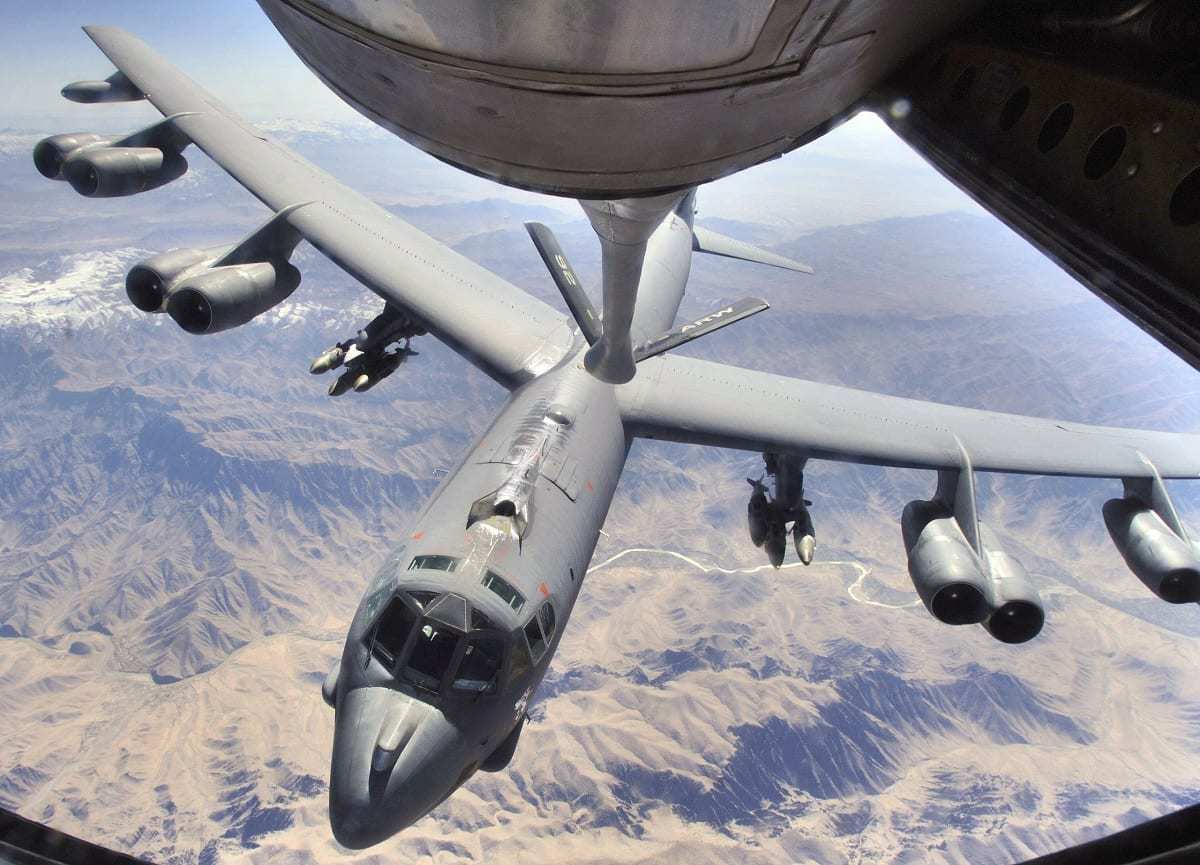 A B-52H from the 2nd Bomb Wing backs out after receiving fuel from a KC-135 Stratotanker over Afghanistan.

On Thursday, Washington sent a stern warning to Tehran in the form of two United States Air Force B-52H Stratofortress bombers, which flew to the Middle East and covered a wide swath of the region. The pair of B-52 bombers, assigned to the 2nd Bomb Wing, flew a short-notice, long-range, non-stop flight from Barksdale Air Force Base in Louisiana to the Persian Gulf on a 36-hour mission.

Along the way the bombers cross the Atlantic Ocean, flew across Europe, through the northern Red Sea, across Saudi Arabia and into the Persian Gulf as a show-of-strength. The hulking jets looped around Qatar and stayed closer to the western side of the Persian Gulf, and while they remained outside of Iranian airspace it was a clear message of deterrence aimed at the Islamic Republic.

Aircraft from Saudi Arabia, Bahrain, and Qatar flew with the bombers during parts of Thursday’s flight, the second such mission in less than a month. This follows another pair of B-52H bombers, assigned to the 5th Bomb Wing at Minot Air Force Base in North Dakota, which also conducted a similar short-notice, long-range flight to the Middle East on Nov. 21. Both flights were conducted to underscore the United States’ commitment to the Middle East even as President Donald Trump has begun to withdraw thousands of troops from both Afghanistan and Iraq.

“Potential adversaries should understand that no nation on earth is more ready and capable of rapidly deploying additional combat power in the face of any aggression,” Gen. Frank McKensize, CENTCOM commander was quoted of saying by Business Insider on Thursday afternoon.

“The ability to fly strategic bombers halfway across the world in a non-stop mission, and to rapidly integrate them with multiple regional partners demonstrates our close working relationships and our shared commitment to regional security and stability,” said Gen. Frank.

The CENTCOM chief added, “We do not seek conflict, but we must remain postured and committed to respond to any contingency or in opposition to any aggression.”

The Air Force Times quoted a senior military official, who reportedly spoke to a small group of reporters on the condition of anonymity, said the Trump administration believes there is the risk of an Iranian attack on U.S. or allied interests in the region is now higher than normal. The Pentagon has sought to ensure that Tehran would “think twice” before taking any such action.

The military official also said there is a concern that Iran or other adversaries could believe the United States may be weaker or have a slower response during a political transition, which officials have flatly denied.

“It’s higher than normal right now, it doesn’t mean that they’re going to do something,” the official stated. “But, you know, we want to ensure that if they are contemplating some sort of an aggressive act, that they would they would think twice about it before they did it.”

It is unclear if Tehran has received the message, but it would be hard for the government in the Islamic Republic not to – as the B-52H can carry both conventional and nuclear weapons, and could soon be armed with hypersonic weapons. Despite it being far older than the crews that fly it, the Stratofortress has been constantly upgraded and updated and therefore remains a very capable weapon.

The military official also added that such B-52H flights, “demonstrate that we could move additional forces here very quickly, that we have global reach with our bomber task force and that our regional partners support us bringing those sorts of capabilities in from time to time.”