Movies, TV shows and notably video games have convinced the masses that every soldier fighting in the Second World War was equipped with a submachine gun – but in fact, most soldiers carried a rifle. And in many cases, the rifles were little improved from those used a generation earlier in the First World War.

Below you will find my list of the most well known and used battle rifles of World War II. Some were loved, some were hated–but all were feared, for one reason or another.

Arguably one of the most widely produced firearms ever (with the possible exception of the much later AK-47), some 37,000,000 Mosin Nagant bolt action rifles were made between 1891 and 1965.

The rifle has an interesting history in that it incorporated two designs and features from two different designers including Sergei Ivanovich Mosin, a captain in the Imperial Russian Army, and Belgian gun designer Leon Nagant. Each submitted rifles for testing, and while Mosin’s rifle was selected, the modified version featured key details of the Nagant design including the fixed box magazine and the magazine spring. This rifle entered service officially as the Model 1891 and production began a year later. The gun fired the 7.62x54mmR cartridge. 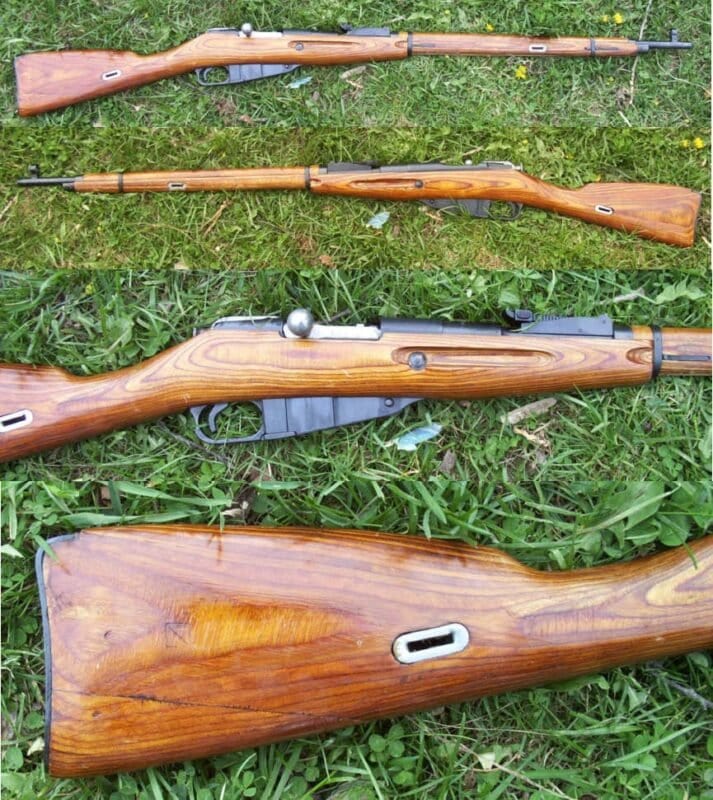 With the establishment of the Soviet Union, production of the Mosin Nagant increased and the rifle underwent numerous changes as the M1891/30, including the barrel shortened by about 3.5-inches. Still a “long gun” in the traditional sense, it was the standard issue weapon of the Soviet Red Army when the nation was invaded by the Germans in 1941. Millions of rifles were produced during the war, and it remained the main small arm of the largest mobilized army in history with some 17.4 million being produced from 1941 to 1945. Numerous variations were produced: notably a sniper version, and a carbine version that was introduced in 1944.

The Soviets were not alone in using a modified/improved version of the same bolt action rifle fielded a generation earlier. For the Germans, the standard service rifle of the German Wehrmacht during the Second World War was the Karabiner 98Kurz – also known as the Kar98K or K98K.

It was also the final development in a line of Mauser military bolt action rifles going back to the late 19th century. Chambered for the 7.92x57mm cartridge it was adopted in June 1935 and while supplemented by more modern firearms it remained in use to the end of the war-making it one of the most widely used firearms during the conflict, only surpassed by the Soviet Mosin Nagant. Designated a “carbine” – at least in the native German – it was still a full-sized rifle and one that had an effective firing range of 500 meters with iron sights and a maximum firing range of 4,700 meters. Versions were also fitted with a telescopic sight, which doubled its effective range.

The Kar98k was a reliable weapon, so much so that it was used by other powers in countless wars well after the defeat of Nazi Germany – including use with the Israeli Army! The weapon’s biggest downside was it held just five rounds while the bolt action meant a slower rate of fire than more modern firearms of the era. Yet, it did the job and remains a sought after rifle with collectors to this day!

The Soviet Union may have produced more bolt action rifles during the war, but the British military also had its own battle-proven rifle. It was the Short Magazine Lee-Enfield (SMLE), which was, in essence, a redesign of the earlier Lee-Metford rifle. It remained in use from 1895 until 1957, which made it one of the most widely used firearms in world history. 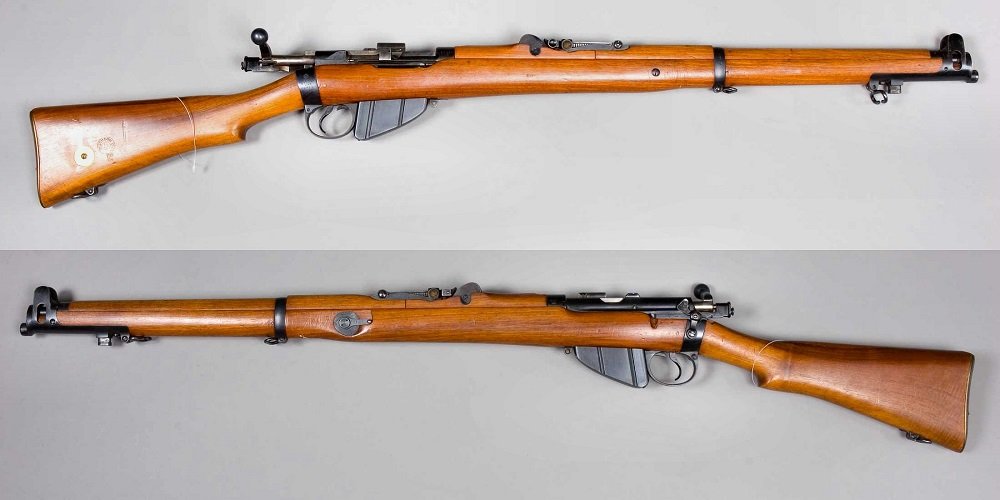 The SMLE featured a 10-round box magazine – which doubled the ammunition available to the Soviet or German designs – and it fired the .303 British cartridge. The rifle was upgraded in the 1940s to make it easier to mass-produce. As a result, the iron sights were redesigned and calibrated for 274 meters while this improved version actually featured a heavier barrel. The other significant change was the type of bayonet that could be used. Instead of the long sword-like bayonets that had been a staple of the First World War the new Rifle, No. 4 MK I version of the SMLE utilized a spike bayonet that earned the nickname “pigsticker.”

General George S. Patton described it as “the greatest battle implement ever devised” – the American GIs and Marines who carried it knew it as the M1 Garand. It proved to be the first standard-issue semi-automatic rifle and the most widely used semi-automatic of the Second World War.

The M1 Garand was chambered in the same .30-06 caliber round that had been used in the Springfield 1903 bolt action rifle, Browning Automatic Rifle, and M1919 .30 caliber machine gun. It was a gas-operated self-loading rifle that also featured an eight-show 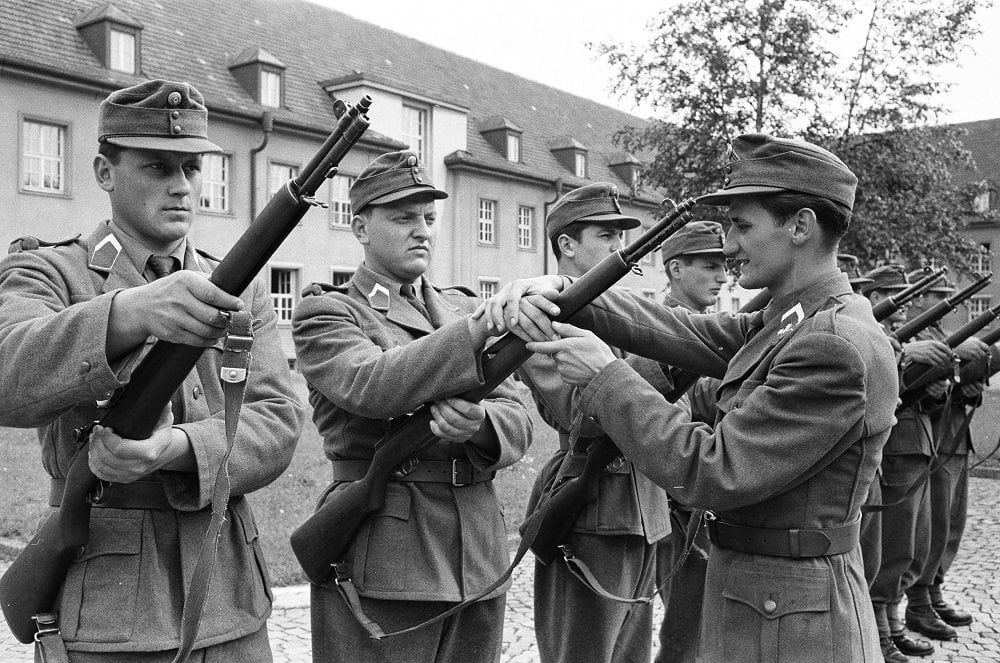 clip-fed magazine. This provided the American GIs with more rounds than the German counterpart Kar98K, but it also meant that was impossible to “top off” or add bullets until all eight were fired.

Movies and video games like to suggest there was a loud audible “ping” when the en bloc clip was ejected, and that is pure fantasy. If it did make the sound it is unlikely anyone would hear it above the other sounds of combat!

Unlike the other combatants, the Empire of Japan utilized two main rifles during the Second World War, and confusingly both are often simply called the “Arisaka.” Each was named after Colonel Nariake Ariska, who was responsible for creating the commission to find a new rifle. The first pattern was known as the Type 30 rifle (the 30 comes from the 1897 A.D., which was the 30th year of Emperor Meiji), and this was updated following the Russo-Japanese War in 1905. The new model thus became the Type 38. It was chambered in the 6.5x50SR and more than three million of these were made. The gun clearly was influenced by the German K98 and other Mauser designs. 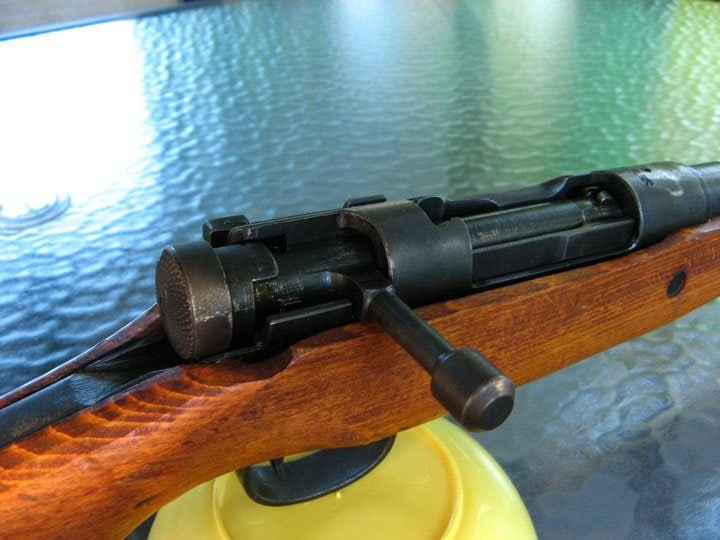 During the war with China, which began in 1931, it was apparent that a larger cartridge was needed and the Japanese adopted the 7.7x58mm round, based on the British .303 (7.7x57R). To confuse collectors and military historians for decades, this rifle was designated the Type 99 – which in this case refers to the Japanese year 2099, which was believed to be the date of the creation of the world). Some three and a half million of the Type 99 rifles were made, not counting variations, which include sniper configurations, and even take-down models that were reportedly designed for use by paratroopers. Another version of the rifle, the Type 44 Carbine, was designed primarily for use as a cavalry rifle – although this shouldn’t be confused with the Type 38 Cavalry rifle, a slightly shorter version of Type 38.