The submachine gun was developed during the First World War, and Germany’s MG18 is largely recognized as the first successful example of the new class of weapon. Typically chambered with pistol cartridges, such weapons gave extra firepower to NCOs, squad leaders, and scouts during the Second World War.

During the conflict, nations such as the United States supplied submachine guns to tankers and other troops who couldn’t carry a full rifle, while the SMG was also supplied by the German and British militaries to paratroopers and other elite soldiers. While picking out the best World War II submachine guns is a tall task, here is a sampling of the most famous and dangerous styles of this weapon from both the allied and axis sides of the conflict:

Many movies, TV shows and video games have convinced many to believe that every other German soldier must have carried a “Schmeisser” – the erroneous nickname of the MP40. It is first important to note that only about 1.1 million were produced compared to 14.7 million Kar98K bolt action rifles, and as for the moniker – noted German gun designer Hugo Schmeisser wasn’t actually involved in the design or production of the firearm. 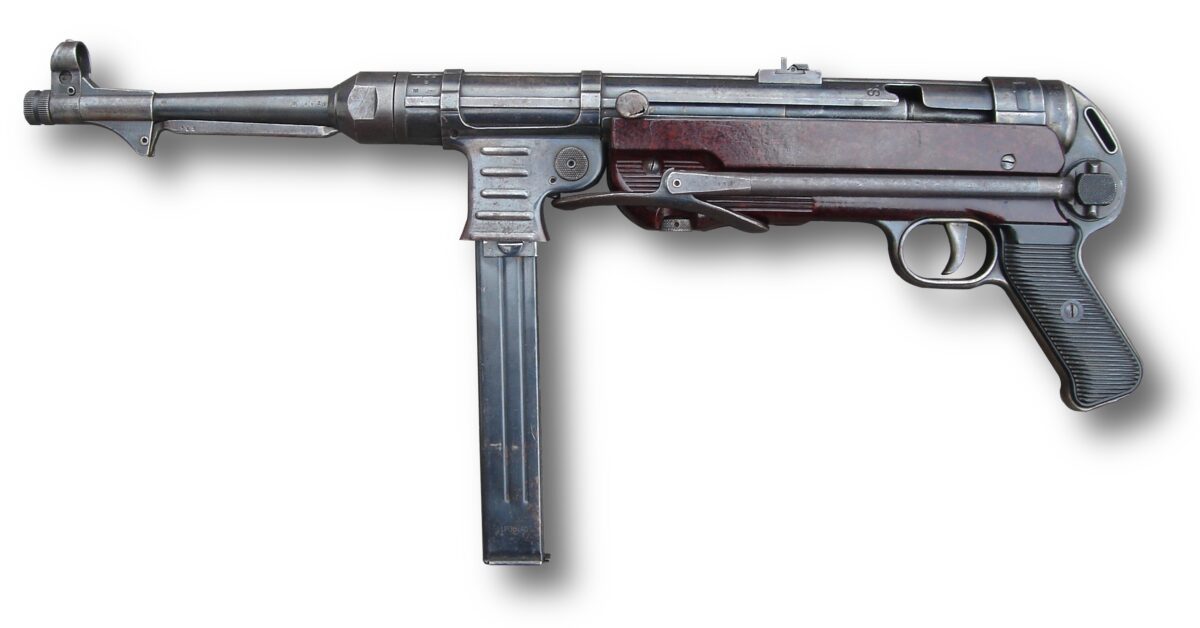 The MP40 was an update of the MP38, a revolutionary submachine gun that was as German as it gets. Designed by Heinrich Vollmer, the MP38 was made of machined steel, which meant it was time-consuming to produce and very expensive. The MP40 took the basic design but simplified the production process by utilizing stamped steel and electro-spot welding the weapon where possible and as submachine guns of World War II went it proved reliable, durable and accurate. Even with the efforts to simplify the production, the MP40 was mainly used by platoon and squad leaders.

The MP38/40 fired the 9x19mm Parabellum round – the same as the Luger and P38 pistols – and the German SMG had a rate of fire of 500-550 rounds. It used a straight blowback action, yet was controllable under most conditions. Its innovative design, which featured a forward stick magazine, was copied in countless small arms in the early Cold War era.

Unlike the Germans, the British went into World War II without any thoughts of employing a submachine gun. That changed after the successful German Blitzkrieg saw the complete defeat of France in the spring of 1940. Desperately short on small arms, and having abandoned vast quantities of weapons during the Dunkirk evacuation, the British began to develop an SMG to supplement the existing stocks of SMLE rifles. 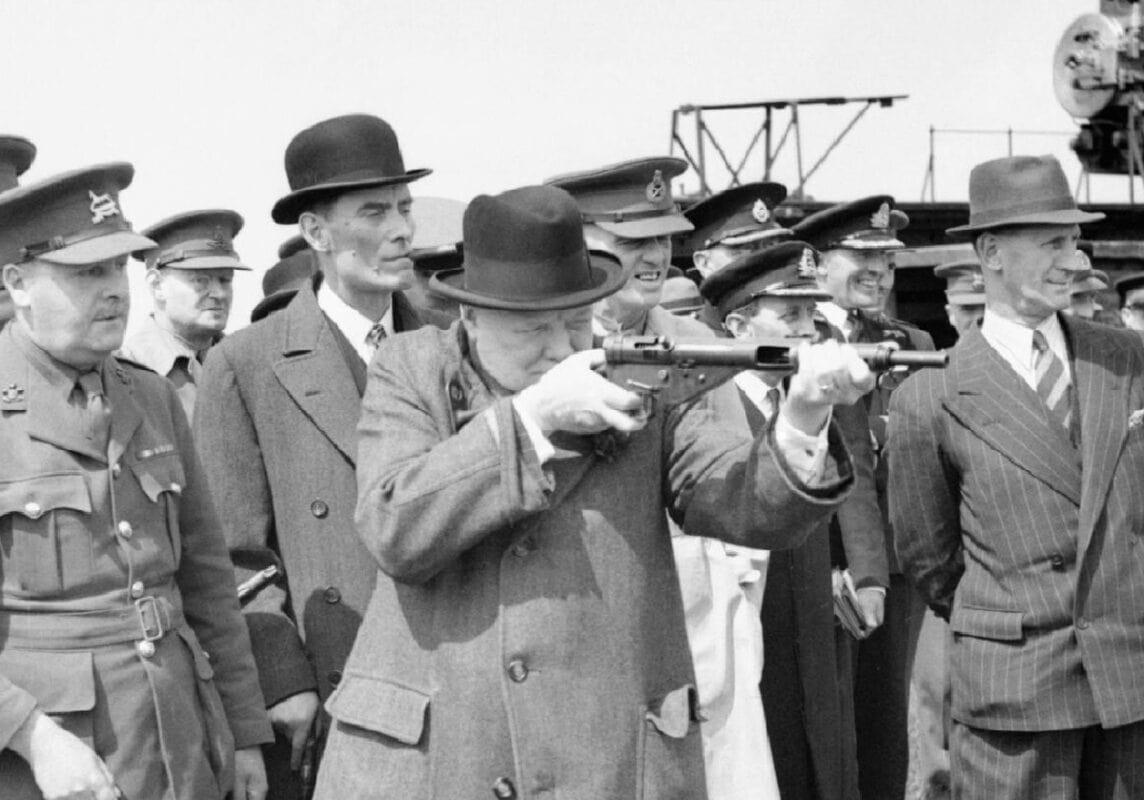 That effort resulted in the development of the Sten Gun, named after its chief designers Major Reginald V. Shepherd and Harold Turpin – along with EN for Enfield, the company that actually produced the weapon. The British military also took a novel approach with one aspect of the design – chambering it in the 9x19mm round employed by the Germans. That allowed British soldiers to use captured German ammunition, while the Sten Gun could even use MP40 magazines!

Simple in design, the Sten Gun is really little more than a tube with a firing mechanism. While crude, it functioned reasonably well and had muzzle velocity of 365 meters per second with an effective range of around100 meters. The Sten went through several design updates including the MkV version that was fitted with a wooden stock and had the unique ability to mount a bayonet. That version was introduced in 1944 and many of these were issued to paratroopers.

Developed at the end of the First World War, the Thompson submachine gun arrived too late to see any action. However, it made an impact when it was used by criminals and law enforcement alike in the interwar era where it earned such dubious nicknames as the “Chicago Typewriter.” 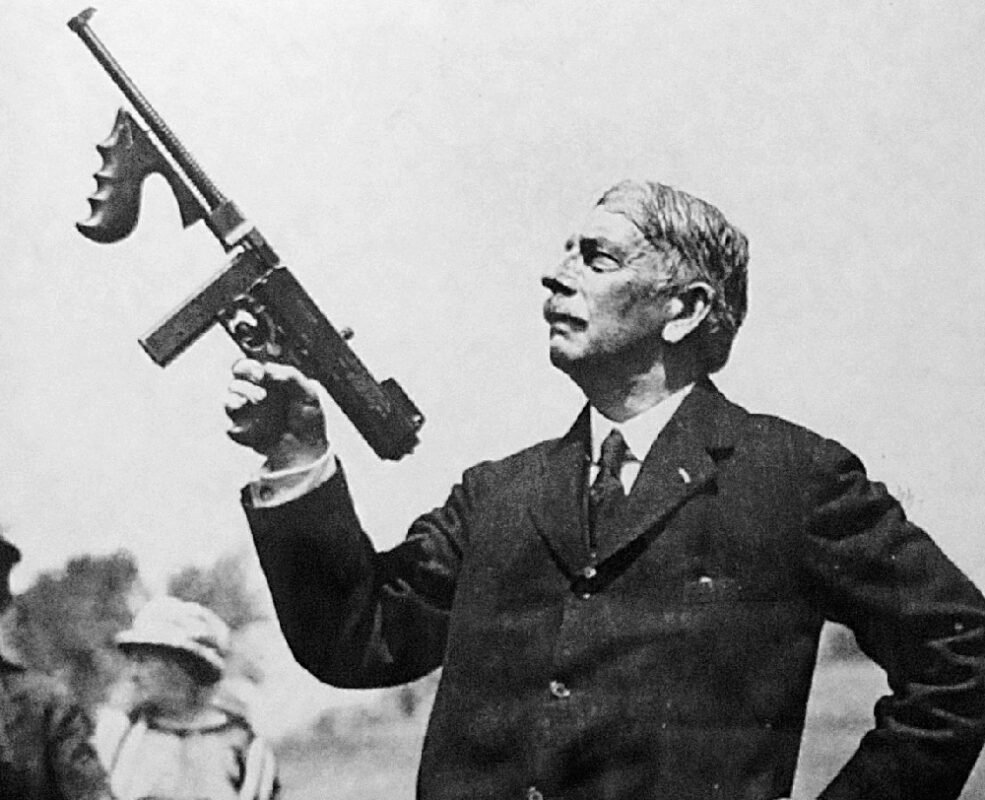 By the outbreak of World War II, the Thompson M1928A1 was in use with the U.S. Army and United States Marine Corps, but it was found that the 50-round drum magazine was prone to jamming while it was also too heavy and bulky. To reduce the complexity of the design and to reduce the production costs, the U.S. military adopted the M1A1, which utilized a 20 or 30 round box magazine. All the military versions of the Thompson fired the .45 ACP cartridge while the M1A1 version had a rate of fire of 625rpm and an effective range of 165 yards. Much like the MP40 the M1A1 was carried by platoon and squad leaders during the Second World War.

Despite the intense pressure put on the Soviet industry during the Second World War, the Red Army’s Pistolet-Pulemyot Shpagina (PPSh-41) was the most widely produced SMG of the conflict. Some six million PPSh-41s were produced compared to just a million of the German MP40s.

However, it took a serious amount of effort to get there. The weapon was actually an improvement of Russian gun designer Georgi Shpagin’s PPD-40, which interestingly enough had been originally designed in 1934, but didn’t see widespread production until the Winter War with Finland in 1939. This PPD-40 proved to be reliable enough, but an easier to produce variation was needed – that would be the PPSh-41. As with the PPD, the PPSh-41 fired the 7.62x25mm pistol cartridge that was developed for the TT-33 Tokarev pistol.

Originally fitted with a 71 round drum magazine, which gave the gun its distinctive silhouette, it was later issued with a 35-round curved box magazine. In an interesting twist, the drum magazine was in fact a copy of the Finnish M31 Suomi magazine, which also held 71 rounds. The PPSh-41 was durable yet crude and its simple looks were certainly deceiving, as the weapon could fire 900 rounds per minute. Because of its reliability, captured PPSh-41s were prized by German soldiers, especially in the latter part of the war.

The Japanese didn’t employ SMGs in large numbers, and Type 100 only entered service in 1942. Designed and produced by the Nambu Arms Manufacturing Company, it was a simple and inexpensive weapon. As with the other SMGs of the era, it featured a blowback design and fired from an open bolt. It utilized a side-mounted 30-round detachable box magazine, while the gun fired the 8x22mm Nambu cartridge, which some have argued was a little underpowered compared to the other SMGs in use during the war. It was even equipped with a bayonet lug.

The Japanese took the extra step of providing a chrome-plated bore, which was developed for Asian jungle conditions. Some early models also featured a bipod, while a paratrooper version was fitted with a folding stock. The gun underwent a design change in 1944 to simplify the production, and as with other “last ditch” small arms used by the Japanese, these are notable for roughly finished stocks, sloppy welds and other telltale signs that quality wasn’t the highest priority.

The Italian military has been the butt of many jokes, and during the Second World War it utilized some of the most dubious small arms issued – but at the same time some of the weapons stand out as well. 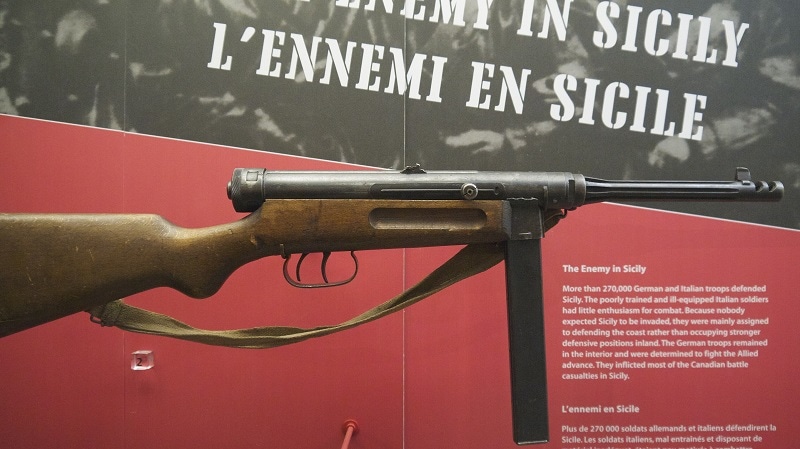 Among the latter example is the Beretta Modello 38 (Model 38), an innovative submachine gun that instead of having a fire selector featured two triggers: one for semi-automatic and the other for full-automatic fire. That weapon, which was chambered for the 9x19mm Parabellum round, was also used by German Waffen SS as well as by the Romanian Army and saw post-war use in the Algerian War and the Congo Crisis.