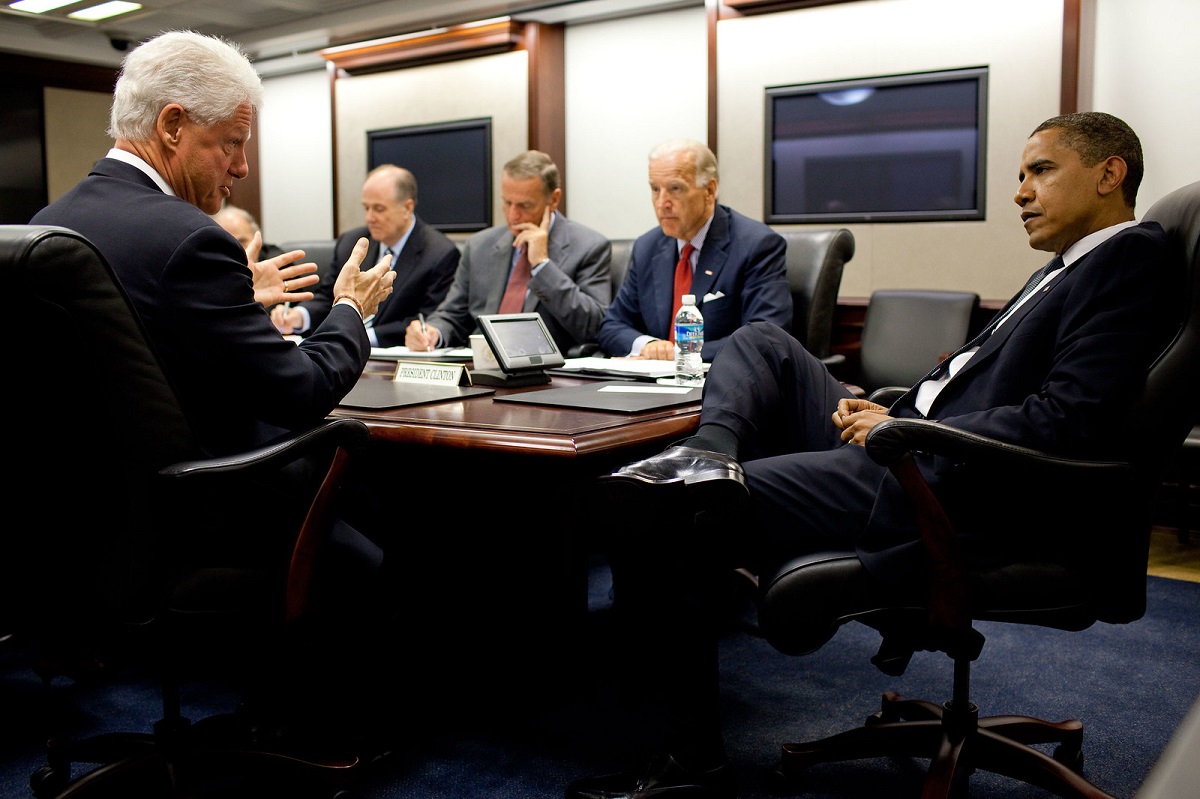 With the dawn of the Biden administration, there is concern among some experts on U.S. policy towards North Korea that the United States may revert to the Obama-era North Korea policy of strategic patience. That policy saw the United States apply increasingly harsh unilateral sanctions on North Korea which, combined with additional multilateral sanctions and ongoing diplomatic isolation of Pyongyang, was meant to compel North Korea to commit to denuclearization, and was regarded by many as a failure. It is worth remembering, however, that for much of his first term Obama demonstrated a much different approach to dealing with the issue of North Korea’s nuclear weapons program; indeed, the adoption of strategic patience as a policy framework for dealing with North Korea was preceded by serious attempts at diplomatic negotiation with the DPRK.

When Obama took office in 2009, the situation with North Korea was less than promising. The Bush administration had both confronted North Korea for its violation of previous agreements and had entered into lengthy multilateral negotiations with North Korea over the future of its nuclear weapons program. Those negotiations, known as the Six-Party Talks which included China, Russia, South Korea, and Japan, took place in several rounds beginning in 2003, and by the fourth round in 2005 had resulted in a joint statement regarding steps towards the denuclearization of the Korean Peninsula. This was followed in 2007 by an initial plan for the implementation of the joint statement and by a second-phase plan later that same year. Sandwiched between the 2005 joint statement and the 2007 action plans for its implementation was North Korea’s first test of a nuclear device in 2006. By the end of Bush’s second term, the talks and progress on implementation of the agreement had stalled, with Pyongyang barring international inspectors from the country.

Obama, who maintained the goal of implementing the 2005 agreement, faced almost immediate pressure from North Korea. In April of 2009, North Korea launched a three-stage rocket that it claimed was designed to boost a satellite into space, with the rocket’s first-stage falling into the Sea of Japan before the latter stages crashed further out into the Pacific. Following international condemnation of the launch, North Korea announced that it was formally withdrawing from the Six-Party Talks and restarting its nuclear program, and subsequently, the DPRK expelled U.N. inspectors from the country. Shortly thereafter, North Korea would conduct its second nuclear test, triggering further international sanctions. 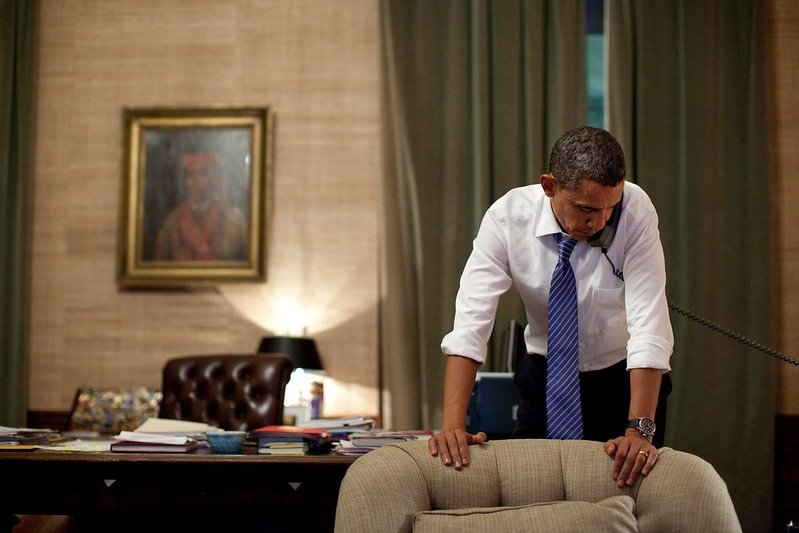 President Barack Obama talks on the phone with President Lee Myung-bak of South Korea in the Treaty Room Office in the White House residence, Nov. 23, 2010. Earlier in the day, North Korea conducted an artillery attack against the South Korean island of Yeonpyeong. (Official White House Photo by Pete Souza).

The next year saw tensions on the Korean Peninsula nearly reach a boiling point following the sinking of a South Korean warship – resulting in the loss of over 40 lives – by what was later determined to be a torpedo fired by a North Korean submarine. South Korea responded by suspending trade and travel with North Korea, while the U.S. engaged in joint anti-submarine warfare (ASW) exercises with the South Korean military. Tensions were further inflamed when North Korea launched an artillery barrage against the South Korean island of Yeonpyeong, which lies near a disputed maritime border, killing two South Korean soldiers and wounding several others. 2010 would also see North Korea unveil a new large-scale uranium enrichment plant at its Yongbyon nuclear complex, which experts argued demonstrated that the DPRK’s nuclear program was likely more advanced than many previously believed.

Toward the Leap Day Deal

Despite the ongoing tensions on the Korean Peninsula, an opening for diplomatic negotiations appeared in 2011. That year, a UN survey estimated that more than six million North Koreans were on the brink of famine. The growing food crisis prompted Pyongyang to both make requests for foreign assistance and to allow inspectors into the country to assess the severity of the situation. The regime reportedly requested 330,000 tons of food aid from the United States, and while the U.S. maintained that humanitarian assistance was not linked with the ongoing nuclear weapons issue, the issues were seemingly inseparable; the U.S. continued to demand a moratorium on nuclear activities as a precondition for full talks, while the DPRK continued to push for food aid. Talks took place in July of 2011, with the U.S. inviting North Korean deputy foreign minister to New York to meet with U.S. Special Representative for North Korea Policy Stephen Bosworth. A subsequent round of talks took place later that year in Geneva before a planned third round of talks was postponed following the death of North Korean leader Kim Jong Il in December.

Following the transfer of power to Kim Jong Un, negotiations resumed in late February of 2012, eventually culminating in what came to be known as the Leap Day Deal. Announced on February 29, the deal saw North Korea commit to a continued moratorium on the testing of long-range missiles and nuclear devices, while also suspending nuclear activities at its Yongbyon nuclear complex and allowing inspectors onto the site; this last concession would have allowed IAEA inspectors access to the new uranium enrichment facility unveiled in 2010. The U.S., meanwhile, agreed to send North Korea a total of 240,000 tons of food aid, delivered in 20,000-ton monthly shipments of nutritional supplements that would have been closely monitored to ensure its delivery to vulnerable segments of the North Korean populace.

Despite an initial sense of cautious optimism surrounding the Leap Day Deal, the agreement would only remain in place for a matter of weeks. Less than one month after the deal was signed, North Korea announced plans for a satellite launch, an action that U.S. officials argued was in violation of the terms of the Lead Day Deal. True to its word, the following month North Korea went ahead with what would ultimately be an unsuccessful launch. In response, the U.S. announced that shipments of food aid to North Korea would be suspended, signaling the death of the Leap Day Deal.

Assessing why the deal ultimately fell apart requires more than a surface-level analysis; indeed, it would be too easy to simply explain the deal’s collapse as an example of North Korean misconduct without attempting to assign some logic to the DPRK’s decision to conduct the satellite launch. Despite statements to the contrary by U.S. officials, the DPRK never accepted the conclusion that the Leap Day Deal included a ban on space launch vehicles. U.S. negotiators reportedly tried to find a way to work such an understanding into the agreement, but their North Korean counterparts would not budge on the issue; in the end, the most they got was a recognition on the part of the North Koreans that the position of the United States was that a space launch would undermine the deal. That, in other words, ended up as a unilateral position on the part of the United States. The decision to launch the satellite, then, is best understood not as an irrational, deal-breaking move on the part of the North Koreans, but instead as a calculated measure designed to test the resolve and limits of the American commitment to the deal. Van Jackson, at the time the country director for North Korea policy at the Pentagon, has argued as much, saying that he believes North Korea was attempting to test the limits of American leniency in an effort to understand what the confines of a bilateral relationship with the United States might be.

Regardless of the causes, the collapse of the deal had significant ramifications for the Obama administration’s North Korea policy moving forward. Later in 2012, North Korea would carry out a second – this time successful – satellite launch, and the following year would see the DPRK undertake its third nuclear test. It was becoming clear by this point that the Obama administration had reached its breaking point with North Korea, and it began to move away from an emphasis on meaningful diplomatic negotiation with North Korea. The administration unveiled a policy of “sustained, robust pressure through sanctions” as a means for enhancing “prospects for progress in denuclearizing North Korea,” while declaring that future engagement with North Korea would not be undertaking for diplomacy’s sake alone, instead of arguing that real progress would only come about as a result of “a fundamental shift in North Korea’s strategic calculus.” These positions would form the core of the strategic patience policy that would characterize the administration’s North Korea policy throughout the remainder of Obama’s time in office. There would be no further efforts towards diplomacy with North Korea, and over the course of the policy’s lifespan North Korea would make significant progress in its development of nuclear weapons and ballistic missiles.

Strategic patience did not exist, however, as a clear policy preference from the onset of the Obama administration; rather, it was a policy position that the administration fell into as a result of continued North Korean intransigence and frustrations in attempting to progress down the path towards a diplomatic solution.