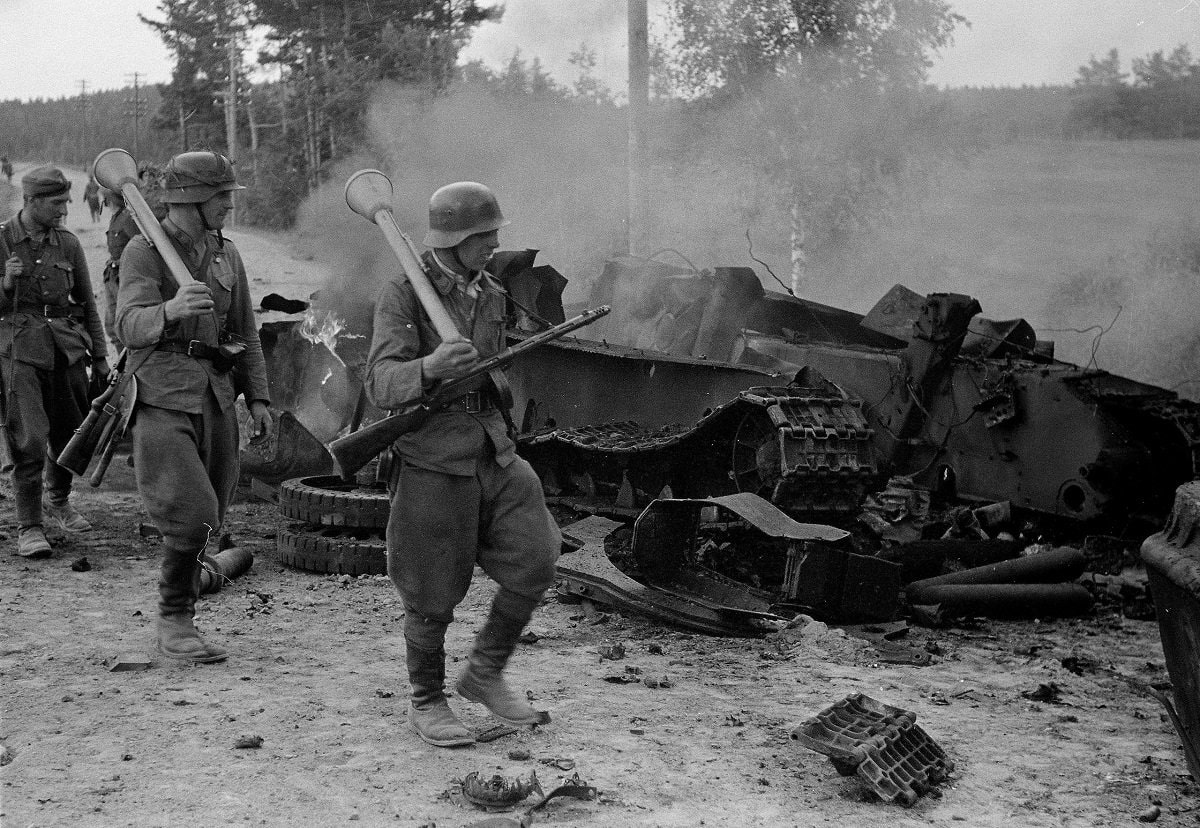 As anti-tank weapons go, one, in particular, didn’t have an extraordinary range, it had limited stopping power, aiming was rather crude and it was one shot only – yet the German-designed Panzerfaust (“armor fist”) has become somewhat legendary.

Only introduced in 1943, the Panzerfaust was very much a sign of the state of the war effort, which had turned against Nazi Germany and its once seemingly unstoppable military faced assaults on all fronts. Inexpensive to produce and simple to operate, the Panzerfaust gave a single infantryman a weapon that could take out enemy armor.

It wasn’t exactly a new innovation, however, and rather was an evolution of technology that dated back to the 1880s – when it was first found that hollow space in an explosive projectile did more damage than a solid block. The jet of hot air helped intensify the explosive attributes of the projectile. While the knowledge was understood by American and German scientists very little was actually done with it in weapons development. 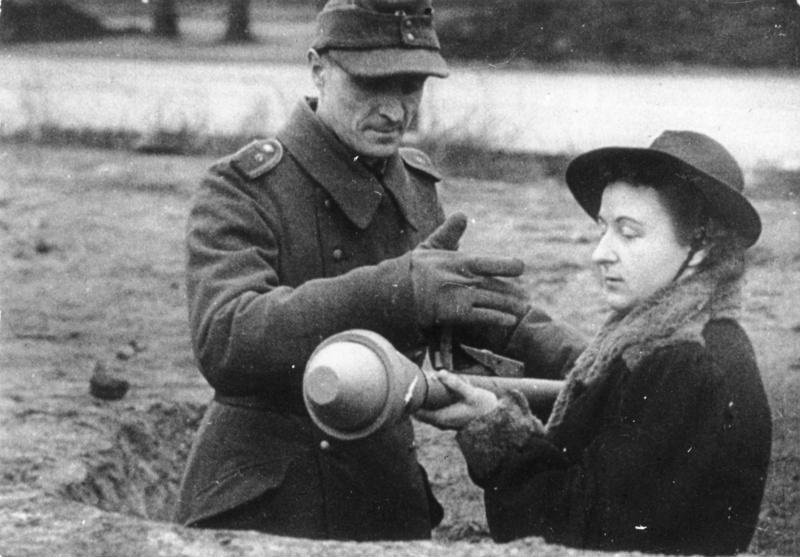 March 1945: Volkssturm trooper explaining the handling of a Panzerfaust to a female civilian.

Then in the 1930s, German engineers began to experiment with ways it could be employed but yet it still wasn’t until the war effort began to turn in favor of the Allies that a weapon was developed to utilize the breakthroughs in shape-charge technology.

At the time Germany had already copied the American M1 “bazooka” anti-tank rocket launcher and also “super-sized” it accordingly by increasing the size of the tube and projectile. The Panzerschreck (“tank’s bane”) was an 88mm reusable anti-tank rocket launcher, which proved capable of taking out American and British armor and even Soviet tanks; but it was heavy, required a team of two to operate and while reloadable, the rockets were also heavy. Moreover, the Panzerschreck produced a cloud of smoke and required the teams to shift quickly after firing – not an easy task with a weapon that weighed 24 pounds empty and was nearly as long as the soldier was tall.

The result was the Faustpatrone (“fist cartridge”), a truly crude weapon that was comprised of a shaped charge of a 50-50 mix of TNT and tri-hexogen mounted on a short wooden shaft with spring metal stabilizing fins. It was launched from a preloaded, low-grade steel launch tube filled with a black powder propellant. The Faustpatrone had a range of just 100 feet, yet it could penetrate more than five inches of steel.

A Gruesome Death for Any Allied Tank Crew

It was soon improved as the Panzerfaust, which had a larger warhead and could penetrate up to eight inches of armor. While still crude in design, it was easier and a lot cheaper to produce than the Panzerschreck, and each Panzerfaust cost only around 20 Reichmarks (around $40). It was essentially a recoilless rifle that could launch a small but powerful shape charge at distances up to 200 yards, and if it scored a direct hit it was deadly. The warhead didn’t just explode, it could send a jet of hot metal into the tank’s cabin – which could kill the crew or even set off the fuel and/or ammo.

It was simple to operate but required that the operator be close to the tank. The weapon was thus proved more effective as the fighting reached Germany’s towns and cities, where Allied and Soviet tanks had to navigate narrow streets. Armored crews quickly learned that if the enemy targeted their tanks at close range it was likely over before they knew what hit them. In the closing months of the war as many as 70 percent of Allied tanks were destroyed by Panzerfausts, a testament to the weapon and those daring enough to actually use it.

A number of variations of the Panzerfaust were produced, which increased the size of the warhead and increased the range of the weapon. In the end, however, even with 6.7 million produced, the Panzerfaust couldn’t turn the tide of the war. The semi-experimental Panzerfaust 150M served as the pattern for the Soviet’s RPG-2 – and during the Cold War most nations began to see how a cheap to produce, one-shot anti-tank weapon could give infantry the fist against enemy armor.