In terms of displacement and length, only the Soviet/Russian Typhoon-class, Russian Borei-class and U.S. Navy’s Ohio-class were larger, but then the Russian Navy essentially “supersized” the boats as the Project 949A Antey. Ten meters longer than the original Project 949, the improved class features added space for buoyancy for improved electronics and quieter propulsion.

Each of the Oscar-class submarines has a displacement of 24,000 tonnes and is equipped with twenty-four Granit cruise missile launchers and six torpedo tubes. The SS-N-19 Granit (NATO codename “Shipwreck”) has a range of 550 KM. The missiles can be fired from the tubes fixed at an angle of approximately 40 degrees while the submarines are submerged. The torpedo tubes can utilize both traditional torpedoes and shorter-range anti-ship missiles.

As with all post-World War II Soviet-designed submarines, the Oscar-class submarine features a double hull construction, which comprises an inner pressure hull and an outer hydrodynamic hull. The 3.5-meter space between the hulls provides reserve buoyancy and offers improved survivability against torpedoes. The outer hull also has a weak magnetic signature, which can reportedly prevent detection by Magnetic Anomaly Detection (MAD) systems. 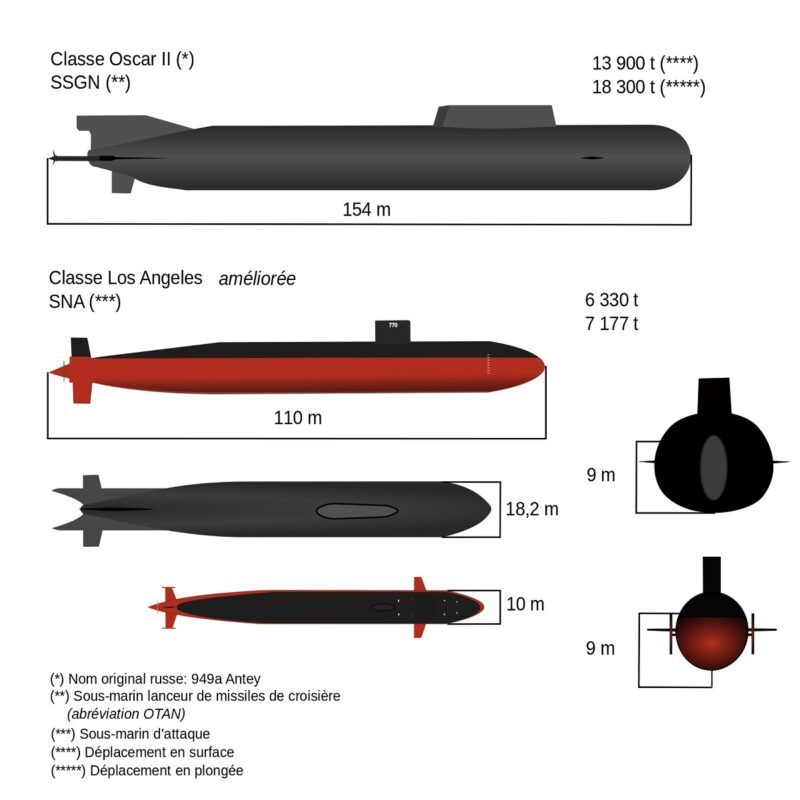 The boats are divided into ten major compartments, while a reinforced rounded cover of the sail allows the subs to break through the Arctic ice cap.

According to Naval-Technology, the class is equipped with two periscopes, radio-sextant, and radar masts, which are located within the retractable devices area. The submarines’ HF and UHF radio-masts, radio-direction-finder masts, and satellite communications masts are also located on the airshaft to feed compressors while floating an antenna buoy can receive radio messages, target designation data, and satellite navigation signals even at great depths or under the ice.

The subs’ bow hydroplanes can be retracted into the hull, while all of the primary mechanisms feature a modular design with two-cascade shock-absorbing systems.

Due to limited funding, only five Oscar-class boats are operating with the Northern and Pacific Fleets, while one other sub is now under repair. One of the first Project 949As completed after the fall of the Soviet Union, Kursk, was lost with all hands in the Barents Sea in 2000 – and it remains one of Russia’s worst submarine disasters.

However, last month, the Russian Navy Main Command announced plans to have seven Project 949A and Project 949AM Antey subs in service with the Northern and Pacific Fleets by the end of 2023. Additionally, in March 2020, Russian Deputy Defense Minister Yuri Borisov announced that the Antey boats would be rearmed with the Kalibr missile systems as part of an upgrade at the Zvezda shipyard in the Russian Far East.

“The Zvezda shipyard is carrying out profound modernization of Project 949A nuclear submarines, including the replacement of armament with the Kalibr missile complex and also the replacement of navigation, life support and other systems,” Borisov told Tass at the time.

As a result of the upgrades, the Antey’s strike capabilities would grow at least two-fold and this would give the submarines the capability to carry forty-eight Kalibr-PL missiles, as well as Oniks or Tsirkon hypersonic missiles.