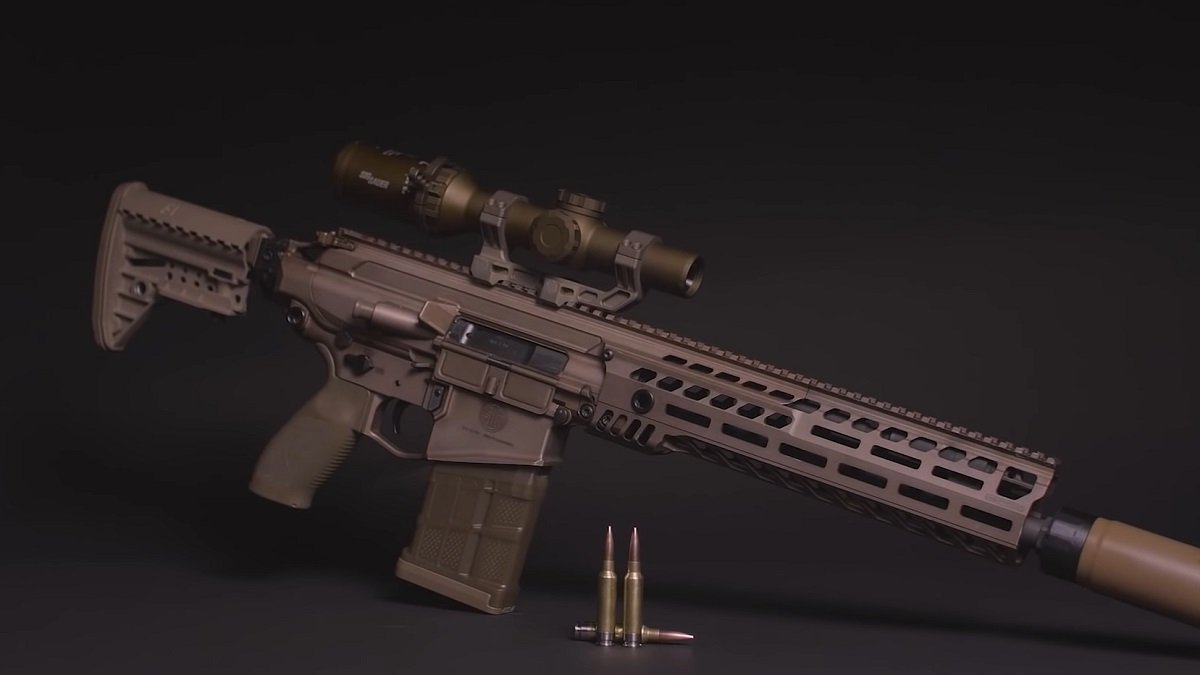 The U.S. Army’s Next Generation Squad Weapon (NGSW) program is ambitious: replace both the iconic M4 carbine and the M249 Squad Automatic Rifle, both of which are in wide service in the United States armed forces. The NGSW program dictates that contenders are to submit two rifle designs, one to replace the M4, the other to replace the M249. And though the projectile the platforms are to fire has been predetermined, many other facets of the program are up to the firearms manufacturers themselves.

In the running are Textron, General Dynamics — and SIG Sauer. Meet their two rifle designs.

SIG Sauer’s automatic rifle and rifle designs are perhaps the least radical of the three companies vying for the Army’s NGSW contract. Their rifle design is a conventional, magazine-fed design with what appears to be an inward-folding, collapsible stock that allows for a more compact platform, a rear and side charging handle, and ambidextrous controls.

Both SIG’s rifle and automatic rifle feature quick-detach sound suppressors, and are a flow-through design that reduces gas and particulate backflow.

Although both of SIG’s designs are arguable advanced, one of the more truly radical design features is the ammunition both rifles fire.

All contestants in the Army’s Next Generation Squad Weapon program must fire a government-specified 6.8mm projectile. Larger than the ubiquitous 5.56mm round, and smaller than the NATO-standard 7.62mm round, the 6.8mm bullet falls between the two. And, though the bullet itself is pre-determined, what the case looks like is not.

SIG opted for a hybrid bi-metallic case design that appears to be a conventional brass body mated to a steel or perhaps aluminum case head. Regardless of the material used for the case head, the design allows for a “significant reduction in weight, with the ability to handle higher pressures resulting in increased velocity and greater penetration.”

Winning the Army’s Next Generation Squad Weapon contest would represent a significant coup for SIG. In addition to being a serious contender to the NGSW program, SIG recently won the Army’s XM17 Modular Handgun System, and is now supplying a vast number of pistols to the U.S. Army, Air Force, Navy, and Marine Corps. Stay tuned for more on the Next Generation Squad Weapon program.