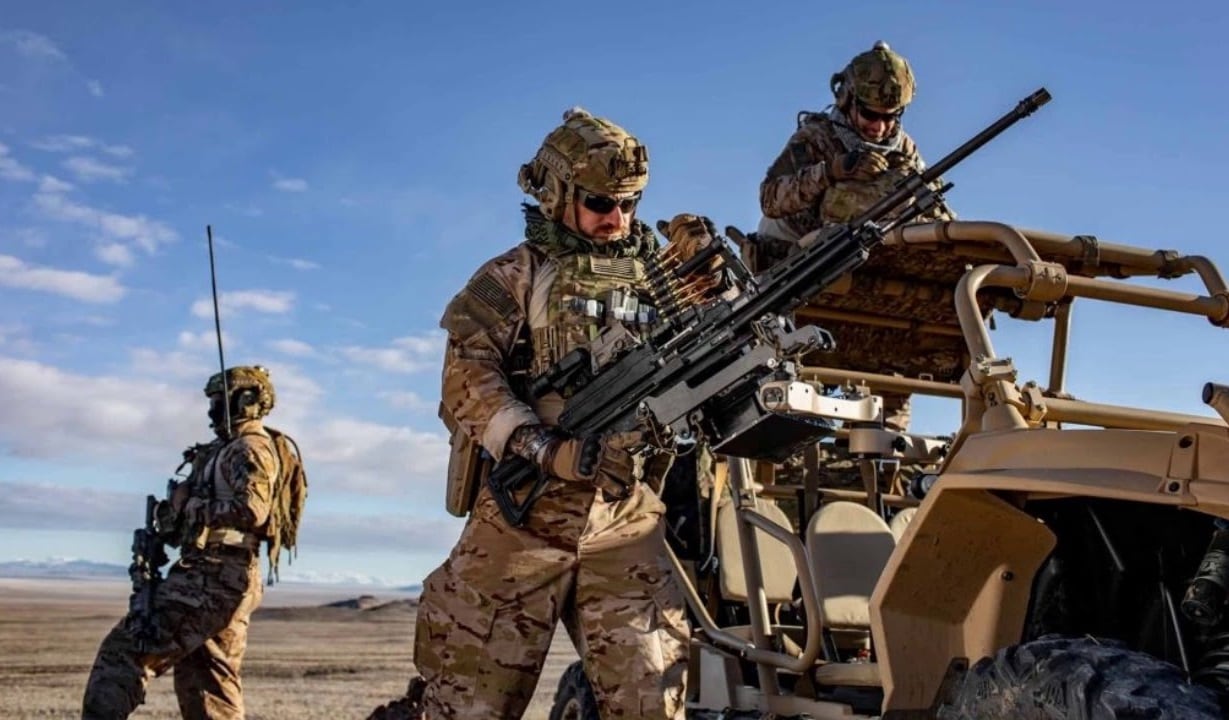 Effective at ranges out to 2,000 meters, the SIG Sauer MG 338 machine gun has a greater range than the M240 platoon-level machine gun. It has a rate of fire of 600 pounds and is chambered in the hard-hitting .338 Norma Magnum (8.6x63mm) round, and yet it weighs in at just around 21 pounds.

It is easy to see why a year ago the U.S. Special Operation Command (UUSOCOM) selected the MG 338 for evaluation to bridge the gap between the M240, chambered in 7.62×51 NATO, and the Browning M2 heavy .50 caliber machine gun. The MG 338 could help provide nearly the range and even stopping power of the M2 with a platform that could still be mobile.

The MG 338 general-purpose machine gun uses a short-stroke gas pistol system that has been integrated with SIG Sauer’s “proprietary recoil mitigation system.” It utilizes an AR-style pistol grip and selector switch, ambidextrous controls, which even allows for the charging handle to be positioned on either side depending on operator preference, while its collapsible AR-style buttstock can fold up for more compact transport or for improved maneuverability in close quarters. It also features a switchable feed tray and quick-change barrel.

All that makes for an adaptable machine gun, but the key to this weapon’s potential success is in its .338 Norma Magnum round, a 300-grain belted magnum round that is reported to have recoil similar to a 7.62mm NATO cartridge yet be lethal to 1,700 meters or more. It has been reported that even at 1,000 meters the .338NM can defeat Level III body armor while it is capable of penetrating soft-skinned vehicles – and thus meets USSOCOM’s need for a platform that could effectively bridge the gap between the M240 and its 7.62mm round and the .50 BMG.

What is also noteworthy is that the SIG Sauer MG 338 can still use 7.62 NATO ammunition by swapping out the feed tray. Additionally, the weapon’s gas block is provided with manual gas regulator with settings for both normal and suppressed use.

“For the first time in decades the U.S. military certified a new machine gun, ammunition, and suppressor at the same time, bringing new innovation, portability, and increased lethality to our ground forces, with all components coming from one company,” SIG Sauer President and CEO Ron Cohen said in a statement from last year.

It may not just be special operators that eventually use the MG 338. The United States Marine Corps has also been evaluating the .338NM round as a replacement for its M240s.

Moreover, in the fall of 2020, the United States Army began the multiyear Platoon Arms and Ammunition Configuration Study to determine what weapon might also replace its M240 platoon-level machine gun. The MG 338 certainly could be in the running.

According to a report from the Army Times, during November’s National Defense Industrial Association conference, Army officials suggested that the study would follow work of the Army’s 2017 Small Arms Ammunition Configuration Study, which led the military to adopt a 6.8mm round for its Next Generation Squad Weapon (NGSW). The NGSW program is now ongoing to determine what weapon will replace both the M4 carbine and M249 Squad Automatic Weapon (SAW).

It could seem that the M240s days are just as limited as the M4 and M249 and that the MG 338 could fill the role for general purpose or platoon-level machine gun across both the Army and Marines.