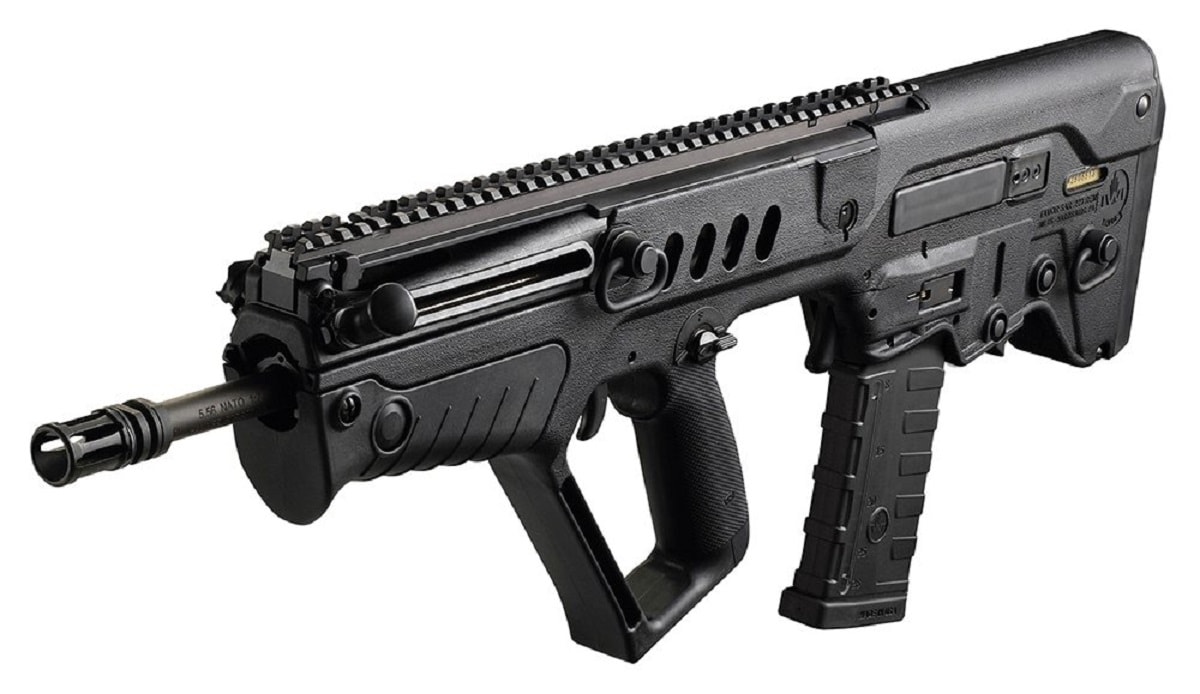 Bullpup firearms aren’t actually new – and the concept of having the action placed behind the trigger to make for a more compact and maneuverable weapon was devised at a time when long guns truly lived up to the name. It was in 1901 with the introduction of the British-designed Thorneycroft carbine that such a weapon was actually devised, but it took until the Cold War for the designs to be refined.

While weapons such as the Steyr AUG, FAMAS F1, and L85A1 seemed ahead of their time, the Israel Weapon Industries (IWI) Tavor TSB16 (SAR) is truly a bullpup ready for the 21st century.

It is a scaled-down version of its Travor-21, which has seen use with the Israel Defense Force (IDF) since it was introduced in 2001. Chambered in 5.56x45mm NATO/.223 Remington and offered with a selective fire system, it made use of modern polymers but also took the best of past bullpups and refined what didn’t work. It also took lessons from more than 50 years of combat experience with the IDF. Among those key lessons was that there was a need for a compact sized rifle that could be used in urban environments.

The best part of the semi-automatic commercial Tavor SAR version is that unlike its military and law enforcement only counterparts, service with the IDF isn’t necessary. Introduced in the spring of 2014, it received the NRA magazine American Rifleman‘s Golden Bullseye for “2014 Rifle of the Year.” Conversion kits have been produced to allow the gun to also fire 9x19mm Luger or 5.45x39mm.

The TSB SAR, which is just 7.9 pounds empty, is just over 26-inches in length – making it one of the most compact rifles in the market today. The design still provides a mil-spec 16.5-inch, chromed lined, cold-hammer-forged barrel yet keeps the weapon close to the shooter and has proven ideal for addressing close-quarters battle (CQB) environments – without the need for a folding or collapsible stock. While few of us would hope to find ourselves in such a situation, the compact size would make for a good home defense weapon, yet still prove accurate to 500 meters and serve as a competent gun for the range.

The gas-operated IWI design was built around a long-stroke piston system with a rotating bolt, similar to those found in the American-designed M1Garnad that was developed in the 1930s, and the Soviet-designed AK-47, which was refined a decade later. The use of this system ensures reliability, durability, and simplicity as well as offering ease of maintenance. It can be fitted with external optics but is still fitted with back up irons with a tritium-tipped front post.

It was also designed with an ambidextrous configuration and operation that addresses a common problem with bullpups when used by left-handed shooters where the ejection port is essentially in front of the shooters’ face. In this case, the bolt and ejection-port can be reversed according and even done in the field or at the range.