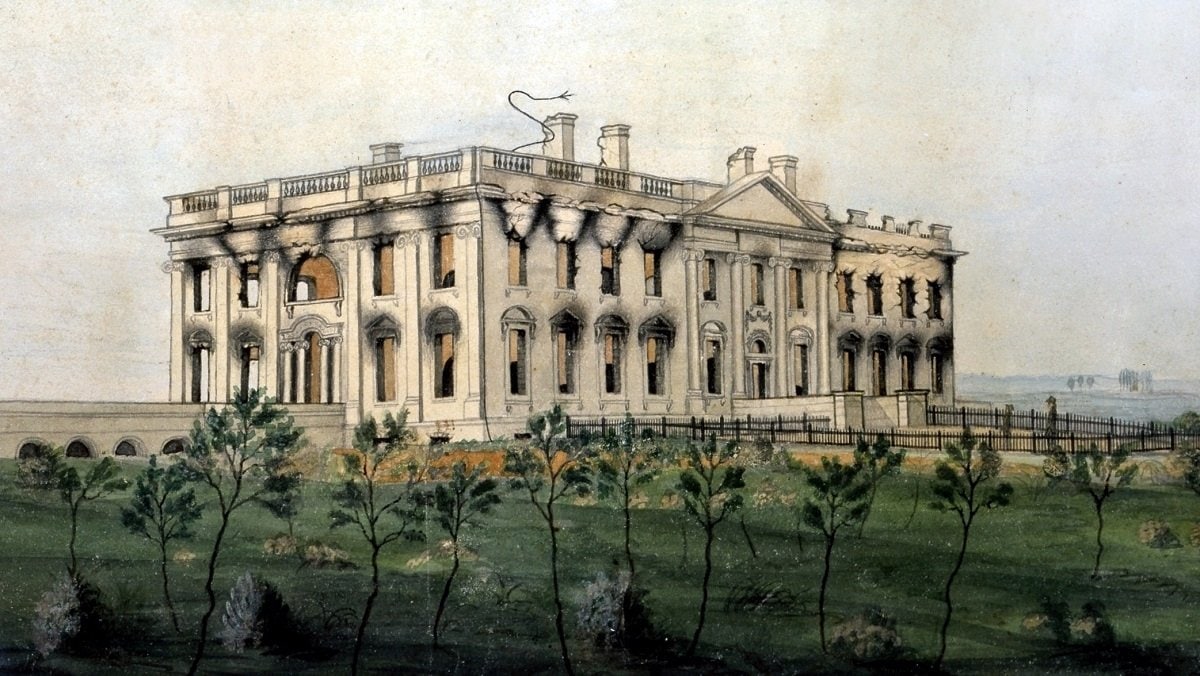 The White House ruins after the conflagration of August 24, 1814. Watercolor by George Munger, displayed at the White House.

For many historians, the violence stemming from the storming of the U.S. Capitol on January 6 brought to mind the pivotal year of 1814 when British forces in the War of 1812 tried to burn down the iconic building that was just fourteen years old at the time.

After achieving victory over U.S. military forces at Bladensburg, Maryland, earlier that day, and seeking revenge for the sacking of York (present-day Toronto), the foreign invaders looted the Capitol first, then set the southern and northern wings ablaze, eventually destroying the Library of Congress. The British burned about three thousand books in the collection and piled furniture together in the Supreme Court Chamber to create a huge bonfire, sending flames shooting out through the windows and roof. The glow of the blaze could be seen fifty miles away.

“You never saw a drawing room so brilliantly lighted as the whole city was that night. Few thought of going to bed—they spent the night in gazing on the fires, and lamenting the disgrace of the city,” Mary Hunter, a resident on Capitol Hill, wrote in a letter that was recounted in Steve Vogel’s book Through the Perilous Fight.

Then about a hundred fifty men marched down Pennsylvania Avenue to the White House, which was better known then as the President’s House. After stuffing themselves with food and wine that had been set out for forty people, they stole souvenirs like President James Madison’s medicine chest and began setting new fires inside the building.

“A rabble, taking advantage of the confusion, ran all over the White House, and stole lots of silver and whatever they could lay their hands on,” family slave Paul Jennings recalled in the memoir A Slave in the White House that was published decades later.

The Treasury building, located adjacent to the President’s House, was also set on fire. Much to their disappointment, the British soldiers did not find any money inside.

From Bad to Worse

The following day saw even more destruction. The British forces torched what remained of the Washington Navy Yard and the Treasury building, along with the structure that housed the State, War, and Navy departments. They also destroyed newspaper printing presses and desecrated a monument dedicated to veterans of the First Barbary War.

Fortunately, nature quickly swooped in to save the day. A sudden thunderstorm struck Washington DC and put out the major fires, likely warding off total destruction of the Capitol. Later that evening, right after the violent rainstorm, the British withdrew from Washington rather than face a potential counterattack.

As the fires died down, some interior structures and much of the Capitol’s exterior survived, and after much debate, government officials decided to rebuild the structure where it stood. Despite the substantial damage to buildings, only one casualty was reported from the fires—John Lewis, the grandnephew of George Washington.

After the attack, President Madison arranged for Congress to meet temporarily at Blodgett’s Hotel when it returned to session later that fall, and the work of Congress continued largely uninterrupted. The following year, the Senate decided to pack up and move to the Brick Capitol, a large red-brick structure built to accommodate Congress for the time being. It wasn’t until 1819—after a major reconstruction project—did the Senate again conduct business in the historic Old Senate Chamber in the U.S. Capitol.

In this article:British Washington DC, DC, History, Sack of Washington, War of 1812