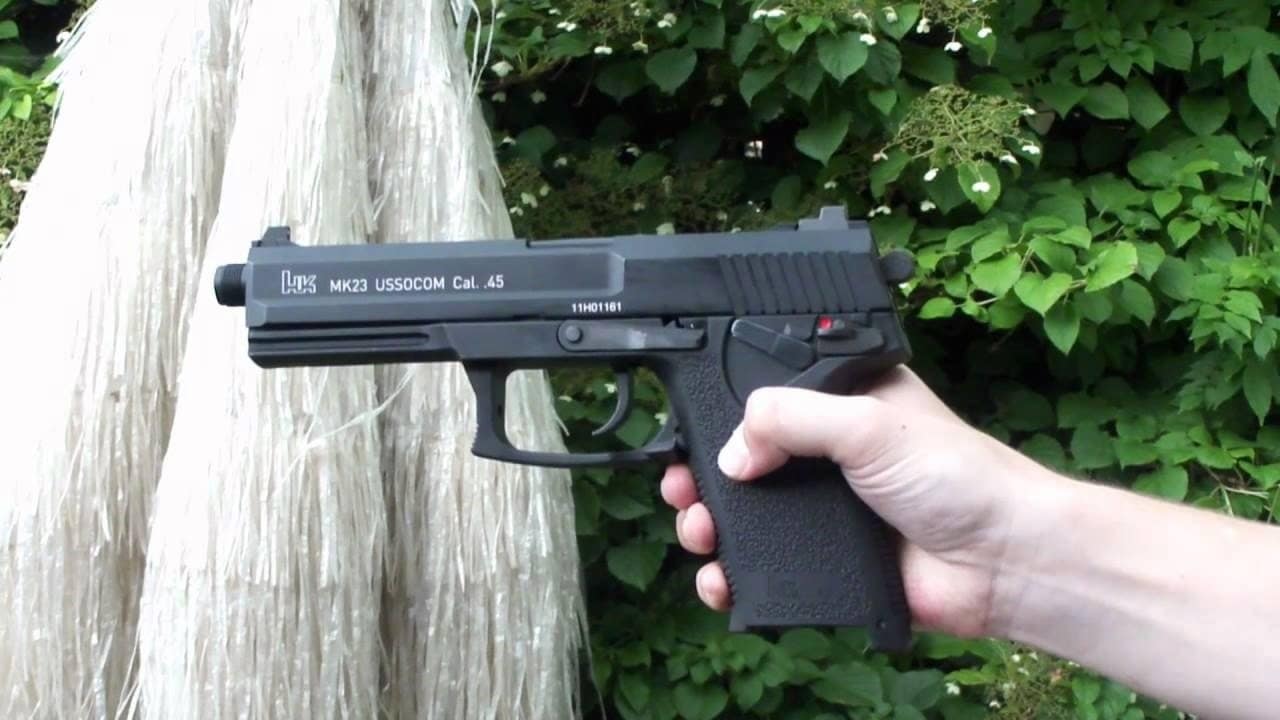 The best defense is a good offense: a role the Heckler & Koch MK23 filled with ease.

The story of the MK23 begins in 1991, with the Offensive Handgun Weapons Program. The United States Special Operations Command (USSOCOM) wanted to find an accurate, reliable sidearm that could provide more stopping power than the newly-adopted Beretta M9 pistol. Though the M9 was not an ineffective sidearm, its 9mm pistol ammunition afforded considerably less stopping power than the M1911A1 it replaced.

In an effort to both reduce the number of pistol sidearms in use amongst the various special operations personnel and to return to the greater stopping power afforded by the M1911A1 and its .45 ACP cartridge, SOCOM went looking for a new pistol.

Generally speaking, a pistol is a sort of last-ditch defensive weapon, not meant to be a soldier’s primary weapon — which was exactly what the Beretta M9 was. But SOCOM didn’t want a backup, they wanted an offensive handgun. Their requirements were myriad. Overall length could be no more than about 12 inches or about 16 inches with a suppressor. Candidates had to have a 10-round magazine capacity and had to be incredibly robust.

Importantly, the pistol had to be chambered in .45 ACP — and not just any .45 ACP, but a high-powered 185-grain +P ammunition. Generating about 10% greater chamber pressure than standard .45 ACP ammunition, the new pistol had to handle this with ease.

One of Germany’s most respected firearm manufacturers, Heckler & Koch, answered SOCOM’s call and submitted their Mark 23 pistol for evaluation.

Their design was formidable. The large pistol’s corrosion-resistant polymer frame was topped with a robust machined steel slide. Heckler & Koch considered the pistol to be match grade thanks in part to the pistol’s match trigger, and long 5.87-inch barrel. The barrel itself featured polygonal rifling and was chrome-lined for superior corrosion resistance.

The MK23 featured a double-stacked magazine, offering the pistol a high 12-round capacity, a large capacity advantage compared to the M1911’s single-stacked, 7-round capacity. In addition, the MK23 had both an ambidextrous magazine release and safety. The MK23 also had a mount for a laser aiming device or tactical light.

Why This Gun Is a Winner

One of the MK23’s most valuable characteristics? Its reliability.

According to the Heckler & Koch website, the Mark 23 underwent some incredibly stringent testing — and came out not only unscathed but retained its very high accuracy:

“Endurance testing demonstrated a service life of over 30,000 rounds of +P ammunition. To meet the reliability requirement, the pistol had to demonstrate a minimum of 2,000 mean rounds between stoppages (MRBS) with both M1911 ball and +P ammunition. All pistols exceeded the 2000 MRBS with an average of 6000 MRBS. In more than 450 accuracy test firings from a precision firing fixture at 25 meters, MK 23 pistols far exceeded the government requirement, averaging 1.44 inches, with 65 groups of less than one inch. There were four groups of .5 inches, with 5 rounds going through the same hole!

That’s some pretty remarkable shooting for a service pistol.

Interestingly, the initial MK23 prototypes also had an interesting slide lock that could be engaged. When engaged, the pistol could fire a single round without cycling the slide. The advantage is reduced noise for situations that called for extreme silence, though on later production models this feature was dropped.

Ultimately Heckler & Koch delivered 1,950 MK23’s to USSOCOM. They also offered the pistol on the civil market, where despite its large size and high price point, was a commercial success. Hand it to the Germans: they made a great pistol.