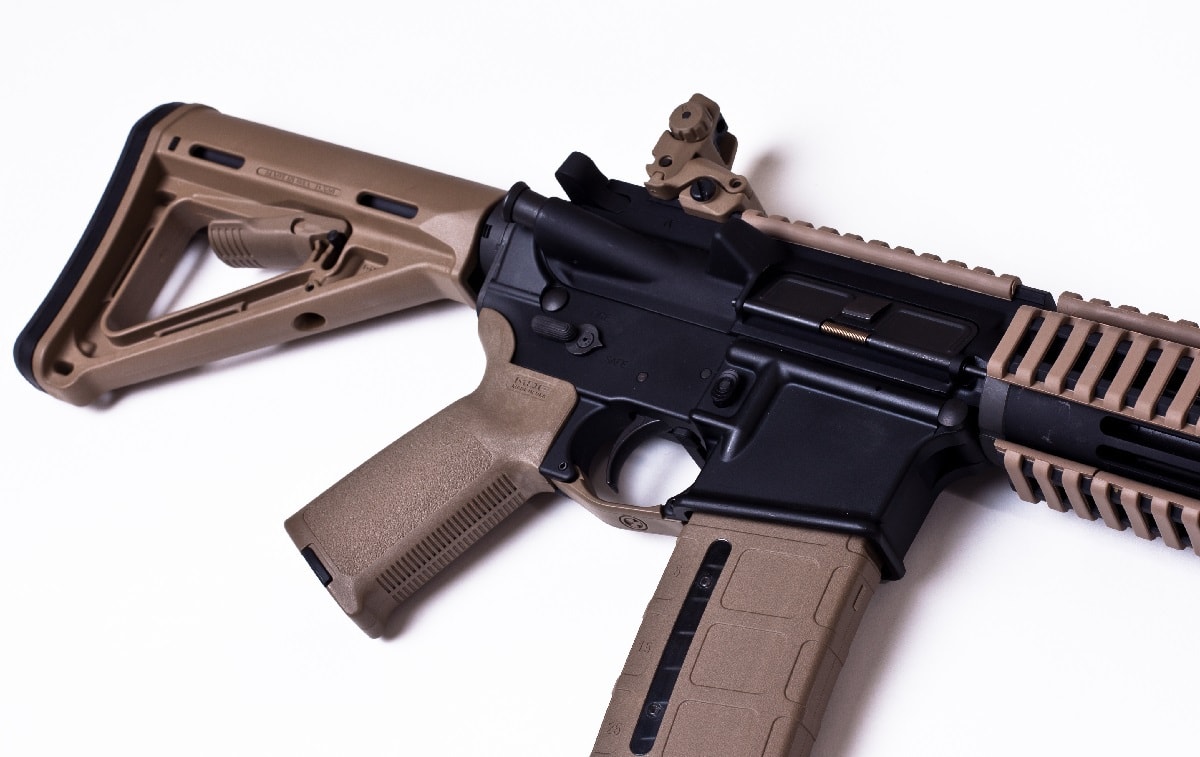 The Akdal MKA 1919 shotgun was created by Turkish manufacturer Akdal as an affordable alternative to the ever-popular AR platform. Most AR-style shotguns are tubular-fed. The 1919, however, features the rare magazine-fed design. It’s actually considered by many to be the best example of a mag-fed shotgun.

It’s very accurate, reliable, and handles almost exactly the same as an AR does.

Recently, the 1919 was redesigned to fix a lot of the problems people had with earlier models. The new model features a redesigned bolt, locking block, and action block, and both the magazine and bolt release have been extended for faster operation.

The standard magazines have a 5-round capacity, although you can find extended magazines online, such in the video above. It can accommodate 2.75” and 3” shells comfortably, and the self-regulating gas system will cycle most rounds flawlessly.

Since the 1919 was designed around AR’s platform, it will feel comfortable and familiar to fans of the AR-15 and AR-10. It is, however, much harder to disassemble. Because of this, it’s not as easy to clean and maintain as an AR is.

It features an aluminum alloy upper receiver with a Picatinny rail, which can accommodate AR-style optics. It comes standard with an A2 sight tower front sight, non-adjustable, and an adjustable and removable carry handle rear sight. If you want to improve your accuracy, I’d recommend going with a red dot or holographic sight.

Even without high-quality sights, it’s easy to stay on target with the 1919. What’s really impressive is how accurate your shots are, even off-hand, while kneeling, and from other unsupported positions!

All the loads I’ve tested have cycled through the 1919 perfectly, and I’ve had no reliability issues whatsoever with the upgraded model. For best results, I’d suggest using both of the included gas rings. The 1919 is amazingly well-balanced, and unlike some tubular-fed models, it’s not muzzle heavy.

It shoots very quickly and smoothly, and for a shotgun that weighs just 7.5 lbs fully loaded, recoil is shockingly manageable with minimal muzzle rise. The non-reciprocating charging handle is mounted on the left side, which is common on modern semi-automatic shotguns. It includes an ambidextrous safety and a single-stage trigger that breaks cleanly at around 8.5 lbs, with no real take-up or travel.

However, trigger reset is pretty long and loud, so this is something you might want to keep in mind for competition use. The 1919 features a 19.7” barrel and 14.5” length of pull, which is a bit long for a tactical weapon. Overall, it’s just about 38” long.

The MKA 1919 was intended to be an affordable alternative to AR platforms for beginning shooters, so it’s priced relatively inexpensively with an MSRP of $650. However, adding the right optics will surely add quite a bit to the overall cost.

The 1919 is an excellent choice for AR enthusiasts looking for a similar shotgun at a more affordable price. It’s especially good for 3-gun competition use, but also suitable for home defense, law enforcement, and even hunting. If you’ll be using it for tactical purposes, we recommend always pairing it with the appropriate body armor.

Richard Douglas is a long-time shooter, outdoor enthusiast, and technologist. He is the founder and editor of Scopes Field.