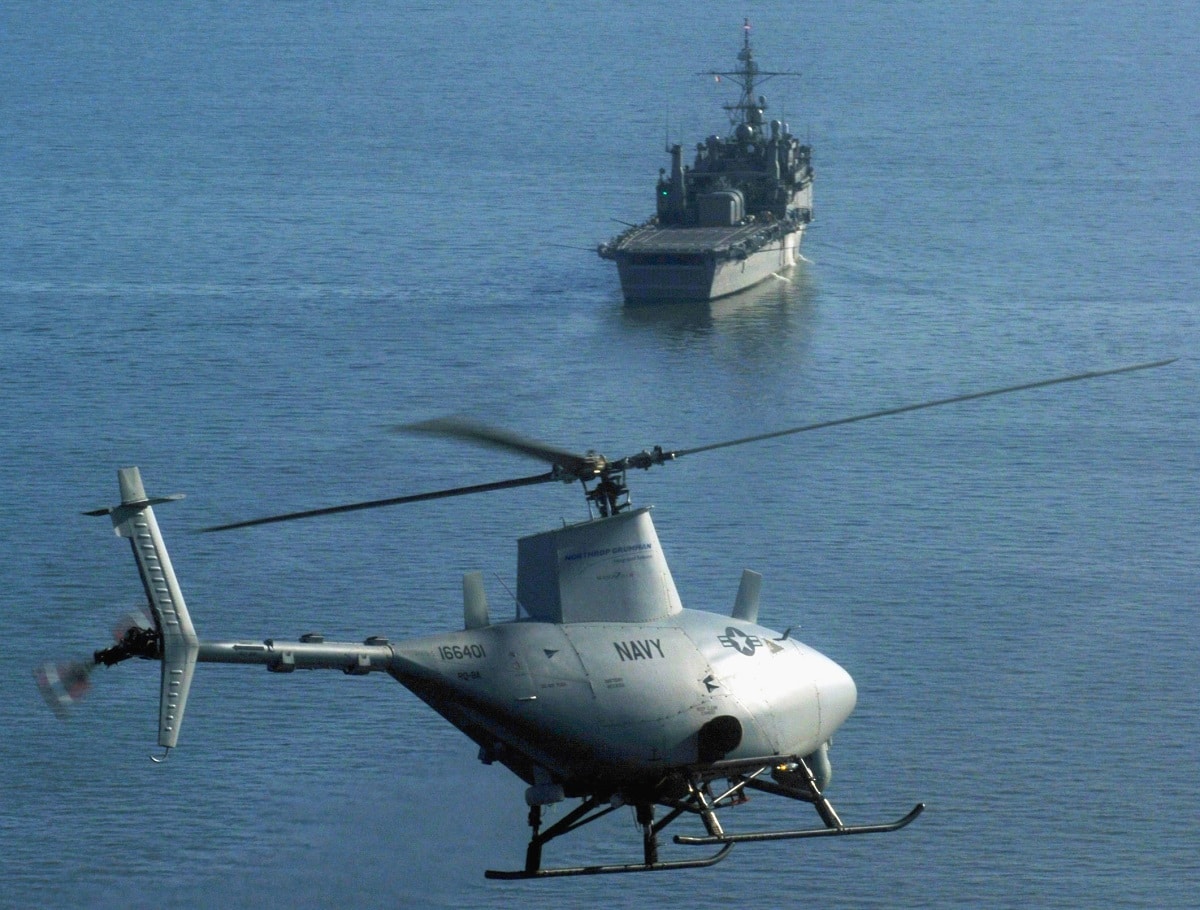 The US Navy (USN) RQ-8A Tactical Unmanned Aerial Vehicle (VTUAV) System ÒFire Scout,Ó prepares for the first autonomous landing aboard the US Navy (USN) Austin Class: Amphibious Transport Dock, USS NASHVILLE (LPD 13), while the ship is underway in the Atlantic Ocean. With an on-station endurance of over four hours, the Fire Scout system is capable of continuous operations, providing coverage at 110 nautical miles from the launch site.

As the name suggests, the primary goal of anti-submarine warfare platforms is to hunt down submarines, in effect creating a protective bubble around surface ships that are particularly vulnerable to submarine attack. Though this mission is typically done by much larger manned aircraft, like the MH-60R Sea Hawk, unmanned platforms like the Fire Scout offer advantages in range and endurance compared to their manned counterparts.

They’re also cheaper: the loss of a drone is comparatively light and less risky than putting a human pilot or pilots in harm’s way. In addition to deploying a mini hydrophone, an offensive capability could in theory be packed into some drones in the form of similarly miniaturized torpedos, like Northrop Grumman’s Very Lightweight Torpedo.

Given the advantages inherent to unmanned anti-submarine warfare platforms, it comes as no surprise that the Navy is interested. And, it’s not the first time the Navy has been evaluating remotely operated platforms for a specialized ASW role.

Northrop Grumman’s Fire Scout isn’t the only done that may protect American strike groups. General Atomics, the firm behind the iconic Predator and Reaper drones, is also adapting one of their drones for a submarine-hunting maritime mission. Similar to the Fire Scout, a modified Reaper drone offers advantages in terms of mission endurance and logistics when compared to a piloted anti-submarine warfare platform like the P-8A Poseidon.

General Atomics’s drone would be a boon to Navy logistics: the company asserts that their SeaGuardian maritime drone uses 90% less fuel than similar intelligence and surveillance aircraft and that the platform needs 50% fewer operations and support personnel than the Navy’s current anti-submarine warfare platforms require. Northrop Grumman’s Fire Scout would likely offer savings in fuel and personnel as well.

One of the drawbacks to replacing the manned anti-submarine warfare mission with drones is sonobuoy and torpedo capacity. Though the aforementioned drones do offer real advantages in terms of range and logistics, a single drone simply cannot carry the same quantity of munitions as a much larger manned platform like the Poseidon. Still, the move toward unmanned anti-submarine warfare platforms brings new and needed capabilities to the Navy and is a concept worth exploring.