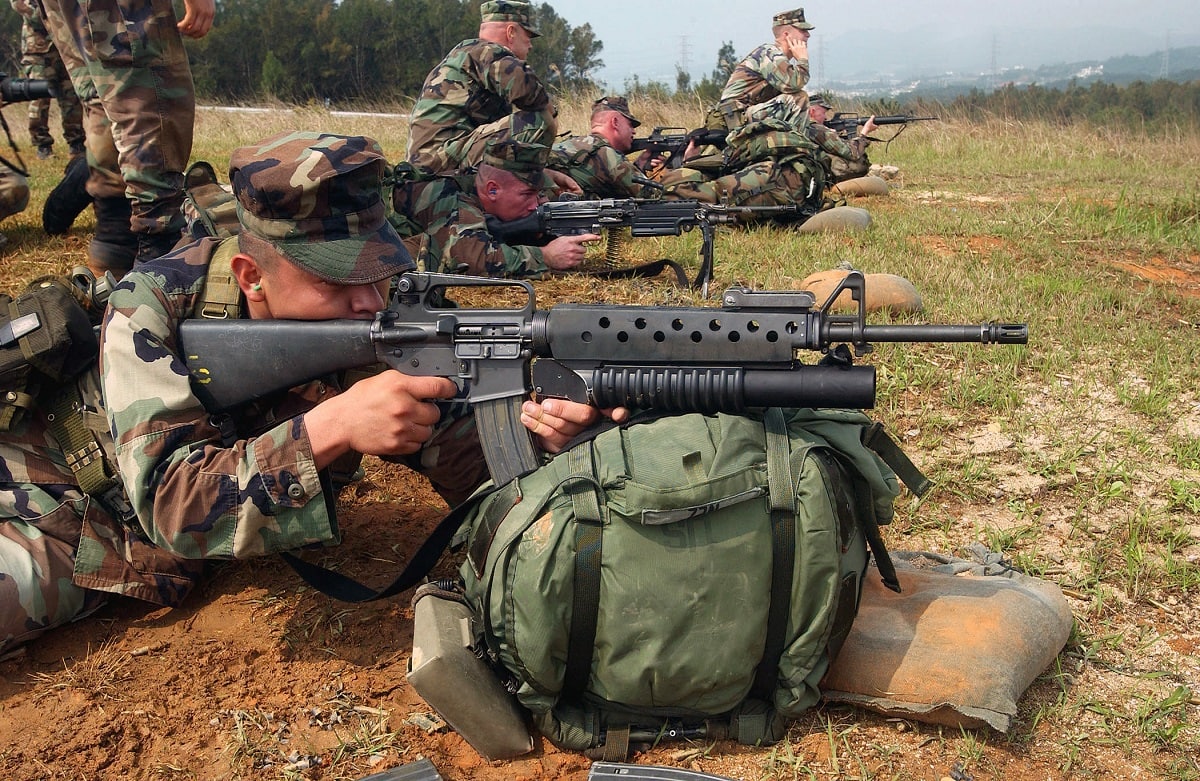 The Soviet-designed AK-47 and the American-built AR-15/M16 are arguably the most iconic firearms in the modern world. Even people who don’t actually “know guns” have at least heard of these. Both were developed and introduced in the Cold War, and millions were produced and used by the respective allies of the Soviet Union and the United States. Arguments on which rifle is better rage on to this day, in this publication and elsewhere.

Each was part of a new class of weapons – the “assault rifle” – and fired an intermediate cartridge that was smaller than the traditional rounds used in a main battle rifle, but larger than the pistol rounds employed in submachine guns.

Each weapon was designed by men who served in the Second World War, and who each had a talent for tinkering. The AK-47 was the creation of Red Army tank mechanic Mikhail Kalashnikov (1919-2013), while the AR-15 was developed by Eugene Morrison Stoner (1922-1997) who served in the United States Marine Corps.

Apart from the fact that they were gun designers who served their respective nations, the two men shared little in common.

Kalashnikov was a loyal citizen, a self-taught peasant turned tank mechanic who never finished high school and yet created a truly revolutionary weapon that would be used by countless revolutionaries. Chambered in the 7.62x39mm cartridge it was a weapon that was rugged, reasonably accurate, and easy to maintain.

For his efforts, he was awarded the Hero of the Soviet Union, the highest decoration his nation could bestow – yet he lived a modest life in a small apartment. Even after the fall of the Soviet Union, Kalashnikov never received royalties for his design, and yet today, the Russian military company that produces small arms for its military bears his name. The weapon he designed has also been on the flags of Mozambique and Hezbollah and the coat of arms of East Timor and Zimbabwe.

In a visit to Germany in 2002, Kalashnikov also admitted that he regretted creating the weapon that was used in innumerable conflicts around the world. “I would prefer to have invented a machine that people could use and that would help farmers with their work – for example, a lawnmower,” The Guardian Newspaper quoted him as stating.

Stoner by contrast was a trained engineer and worked at ArmaLite, a division of Fairchild Engine & Airplane Corporation. By the time he finally found limited success with his AR-5 survival rifle, the Kalashnikov-designed AK-47 was already in widespread use throughout the world.

Stoner then worked on his equally revolutionary ArmaLite AR-10, a select-fire infantry rifle that was chambered for the 7.62x51mm NATO cartridge. It showed promise, but not enough at the time to interest the military. He was given a chance to refine it, and that resulted in the AR-15 – a firearm that has become as infamous as the AK-47 even if few people even know the name Eugene Stoner.

Even among shooting aficionados, Stoner isn’t even that well known. Yet, while Kalashnikov lived in near poverty, Stoner was reportedly paid $1 for every single M16 produced. He wasn’t awarded any medals, but he made enough money that he could afford his own plane. He later went to work at the Colt Firearms Company, which also happened to buy the rights to his AR-15 from ArmaLite.

While the AK-47 was nearly “perfect” when it was introduced because of its simplicity, the M16 had a difficult beginning when it was used in Vietnam. It was more complicated to maintain and required more cleaning than soldiers expected. Yet, it proved a success when refined, and it remains the basis of American infantry small arms to this day.

Beyond the AK-47 and M16: Other Guns By the Greats

Kalashnikov proved to be a successful designer who later worked on the AKM, a modernized variant of the AK-47; as well as the PKM and AK-74 among other firearms. Even today his legacy is seen in the latest Kalashnikov firearms used by the Russian military.

Stoner may have gotten rich from the AR-15, but he never really had another successful design. The Stoner 63 Weapons System was a forward-thinking modular platform that could be configured as an automatic rifle, light machine gun, medium machine gun or even solenoid-fired fixed machine gun. While it saw limited use in the Vietnam War, it was too complicated a design.

In the end, Kalashnikov has had statues erected in his honor, and he has been commemorated on stamps, while he was also awarded the Order of St. Andrew, Hero of Socialist Labour, Order of Lenin, Order of the Red Banner of Labour, and Hero of the Federation.