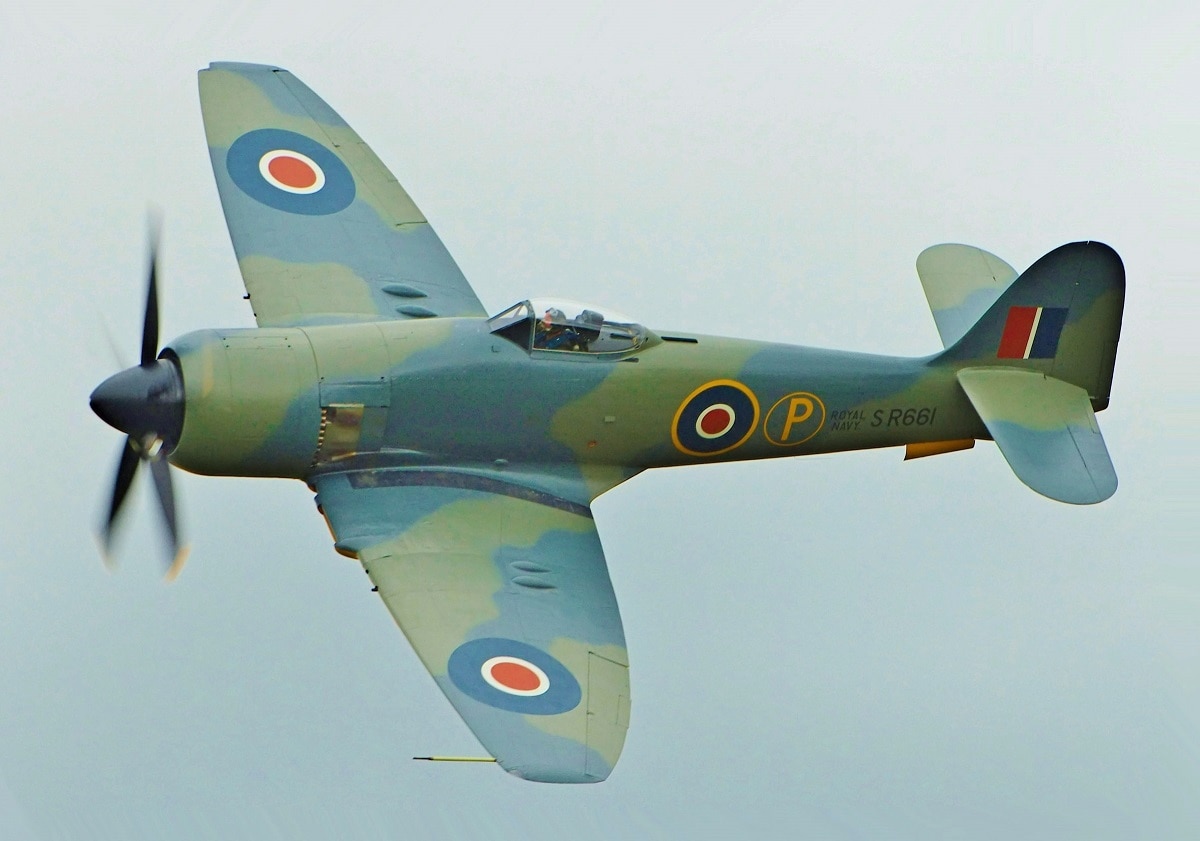 Designed during the Second World War by Hawker Aircraft, the Sea Fury was the last propeller-driven fighter to serve with the Royal Navy and has the distinction of being one of the fastest production single reciprocating engines built. While few of the aircraft remain today, around a dozen are known to have been modified for air racing, while others remain in use on the air show circuit.

The aircraft was developed as a fighter-bomber that essentially transformed the successful Hawker Tempest into a smaller, lightweight, and notably faster aircraft. At the tail end of the Second World War, Hawker was contracted to produce some 200 land-based Furies for the Royal Air Force (RAF), while another 200 carrier-based Sea Furies were to be delivered to the Royal Navy’s Fleet Air Arm (FAA).

As the war reached its final year the RAF canceled its order, as it had an abundance of Spitfires and Hurricanes and didn’t need another fighter. However, the design and development of the Sea Fury continued – even as the Royal Navy halved its order. A semi-naval prototype version, with short arrester hook and non-folding wings, took its maiden flight on February 21, 1945; and some 50 of these were produced as Sea Hawk F.X.

A second Hawker Sea Fury prototype was fully built to meet naval demands and included a five-bladed propeller and folding wings, which took its first flight in October 1945. It was adopted by the Royal Navy as a ground-attack aircraft and a total of 615 were produced as fighter bombers and designated as Hawker Sea Fury FB.11s. The aircraft was also adopted by the Royal Australian Navy (RAN) and the Royal Canadian Navy (RCN). 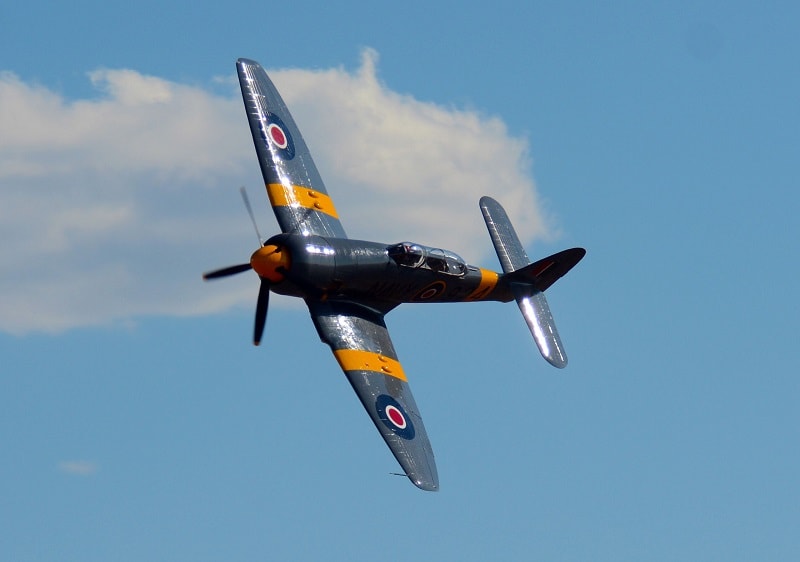 Powered by a Bristol Centaurus 18 aircraft, the fighter-bomber had a maximum speed of 435 mph and a ceiling of 34,300 feet, and a range of 680 miles. It was armed with four 20mm cannons in the wings, and had underwing racks for eight 60-pound rockets or two bombs.

The Hawker Sea Fury proved to be the Royal Navy’s leading single-seat fighter and was used throughout the Korean War, where it was mainly employed in a ground attack role after taking off from the decks of Royal Navy carriers. The Sea Furies were also employed as spotter aircraft for United Nations artillery around Inchon, Wonsan, and Songin. The aircraft also saw use in air combat against Soviet-built jet fighters, where the propeller aircraft was reported to more than hold its own. A Hawker Sea Fury, flown by Lt. Peter “Hoagy” Carmichael of the 802 Squadron has been noted for successfully shooting down a MiG-15 fighter on August 8, 1952, making him one of only a few pilots of a propeller-driven aircraft to shoot down a jet during the conflict.

The Royal Navy also adopted a two-seat trainer version, and both the carrier-variant and the trainers were exported to several nations including the Netherlands, Pakistan, Egypt, Burma, Cuba and Iraq.

Less than 900 Sea Furies were built, but around a dozen heavily modified aircraft have been regularly used in the Reno Air Races. Only about a half dozen are on display around the word, however.

While an aircraft that arrived too late to play a significant role in World War II, the Sea Fury proved to hold its own in the early jet age.