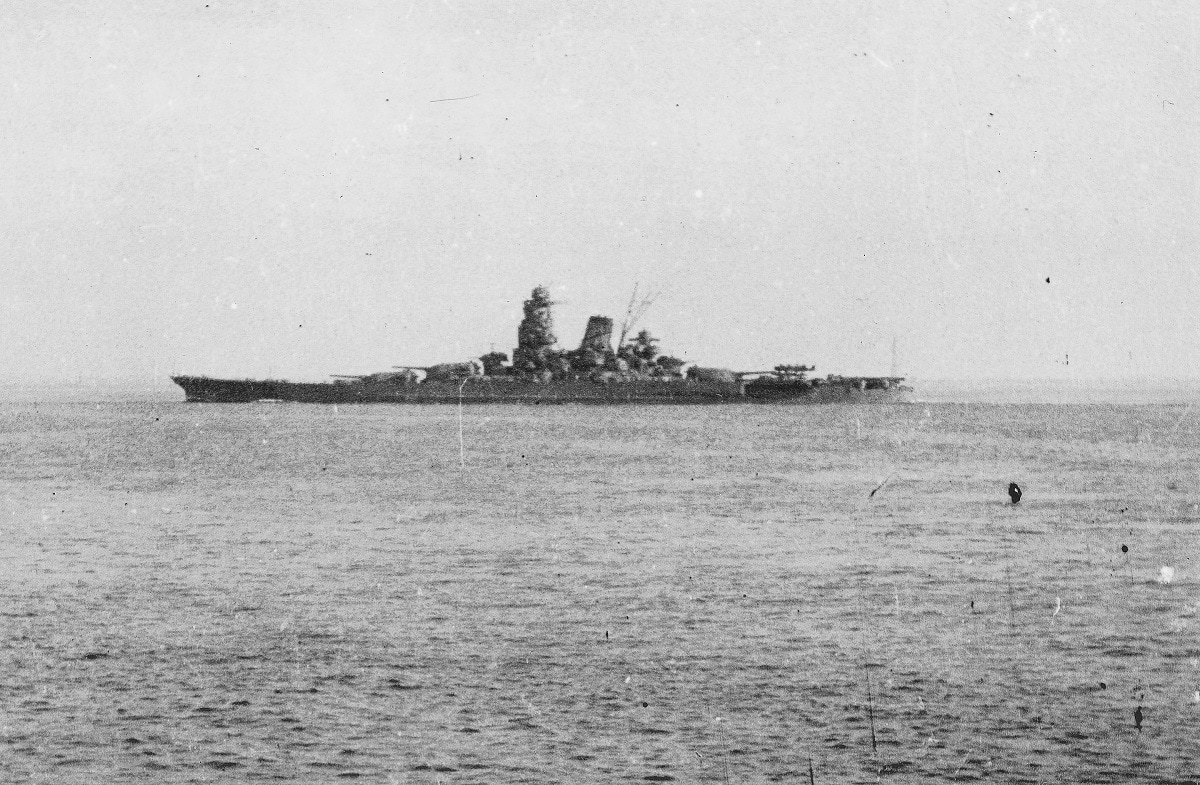 Musashi departing Brunei in October 1944 for the Battle of Leyte Gulf.

Ask any armchair historian to name the largest naval battle in history and a typical response is the “Battle of Leyte Gulf,” fought in October 1944 off the coast of the Philippines. It involved hundreds of ships, had nearly 200,000 participants and it spanned some 100,000 square miles. Battleships, Aircraft Carriers, and Cruisers all duking it out–oh my.

The Battle of Leyte Gulf also involved the United States’ Third and Seventh Fleets, which comprised some eight large aircraft carriers, another eight light carriers as well as 18 escort carriers and a dozen battleships. The Allied forces won a decisive victory over the Japanese forces, which lost a fleet carrier, three light carriers and three battleships. 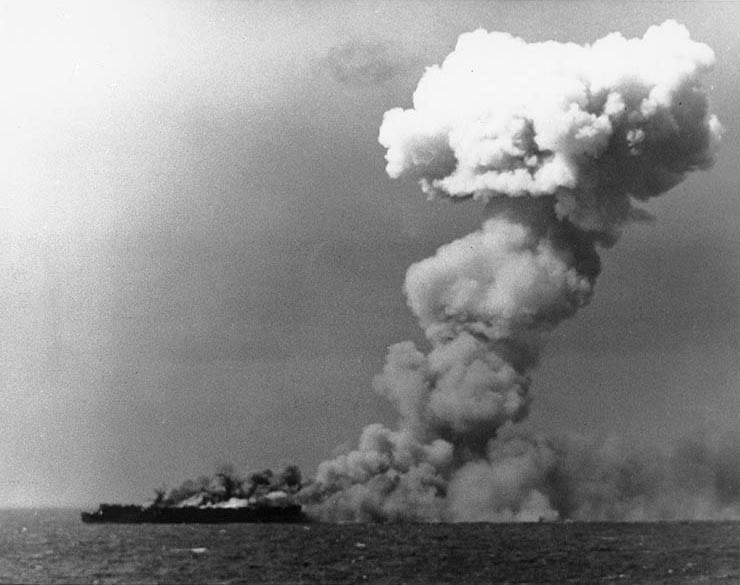 The U.S. Navy light aircraft carrier USS Princeton (CVL-23) burning soon after she was hit by a Japanese bomb while operating off the Philippines on 24 October 1944. This view, taken from the battleship USS South Dakota (BB-57) at about 1001 hrs., shows the large smoke column aft following a heavy explosion in the carrier’s hangar bay.

In terms of sheer numbers, it is easy to see why Leyte Gulf should have the distinction of being the largest naval battle in history. But some historians will argue it really was a combination of four major subsidiary battles that happened to take place at the same time. Moreover, Leyte Gulf didn’t have the largest number of participants or even ships that were engaged in one battle.

There are several other notable battles that have also been called the largest or greatest naval battle in history. Check out the below and make your own mind.

On the shortlist of greatest battles in naval history is the Battle of Lepanto, which was fought between the Holy League, which included the forces of the Spanish Empire, the Papal States, the Republic of Venice and other Italian states; and the Ottoman Empire on October 7, 1571. It didn’t involve quite as many men as Leyte Gulf – the Holy League mustered around 40,000 sailors and another 20,000 soldiers while the Ottoman Empire had some 84,000 men including 37,000 slaves who acted as oarsmen.

However, the Battle of Lepanto involved some 500 warships, mostly galleys, and in the end, nearly a third of the Ottoman force was killed, over half its warship sunk and a substantial number captured. It marked a major turning point for Europe and has been hailed as the greatest naval battle of the late Middle Ages.

Fought in March 1279, the Battle of Yamen took place in the South China Sea between the Mongol Yuan Dynasty and the Song Dynasty. It could go down as the most one-sided naval battle as well – and with an outcome that on paper seems improbable.

The Song had more than 1,000 ships, which were carrying around 200,000 people while the Yuan had just 50 warships and only around 20,000 soldiers. A closer look at the numbers tells another story. Most of the Song vessels were transports, carrying court officials and servants/slaves. The actual fighting capacity was just a fraction of the total strength.

To make matters worse, the Song commander Zhang Shijie ordered his fleet to be chained together – to prevent any from feeling. While prepared for a skirmish and not a full-blown battle, Zhang Shijie quickly was overwhelmed and lost seven ships and most of his best fighters. Unable to support the middle or retreat, a slaughter ensued. At least 100,000 Song were killed, and for days after the battle thousands of corpses floated to the surface. Those included the boy emperor Zhao Shi. Within a year the Song Dynasty, which had ruled China for nearly three centuries, came to an end.

Described as one of the most decisive military engagements of all time, the Battle of Salamis took place near Athens in 480 B.C.E. during the Greco-Persian Wars. It was another battle where on paper it seemed to be one sided affair – upwards of 1,200 Persian galleys (other estimates claim just 800) against 370 Greek triremes.

However, the Greek commander successfully drew the Persian fleet into the small Saronic Gulf. Without room to maneuver, the Persian fleet was overwhelmed by the more agile Greek ships. The Persians lost some 300 ships while the Greeks lost just 40.

Battle of the Red Cliffs

A millennia before Salamis, another decisive naval battle took place in China. It was the Battle of Red Cliffs or Battle of Chibi. Fought not on open water, it was actually an amphibious battle fought along the Yangtze River. It involved some 800,000 troops under the forces of northern warlord Cao Cao, against 50,000 troops under the allied forces of the southern warlords Sun Quan, Liu Bei and Liu Qi.

Yet again the numbers would suggest a very one-sided affair, but the southern forces had better ships and knew how to best navigate the river. The allied forces then set many of their boats on fire and rammed Cao’s fleet, destroying much of his invasion force. He was unable to conquer the lands south of the Yangtze River. It has become famous as an example of Chinese history where the smaller and weaker successfully defeated a larger and stronger force.