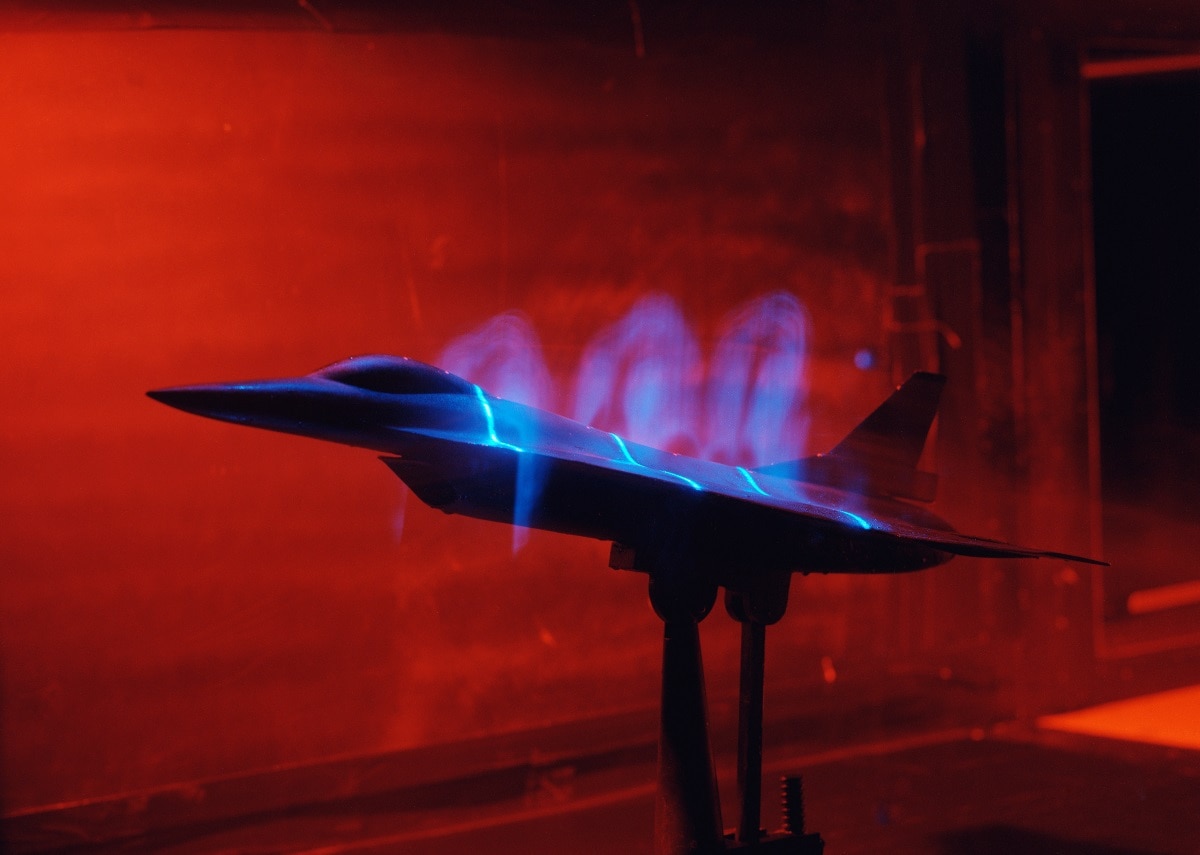 An F-16 SCAMP model at 4% scale being tested in the NASA Basic Aerodynamics Research Tunnel (Facility 1214) at the Langley Research Center. Photo shows a basic flow visualization test using smoke flowing with the air, and three laser light sheets to illuminate it above the model. This experiment highlights vortices trailing from the leading-edge and was part of the NASA High Speed Research Program.

The General Dynamics F-16 Fighting Falcon remains the most procured fixed-wing aircraft in military service. Since its introduction in 1978, it has been adopted by twenty-five other nations, and there are approximately 3,000 operational Fighting Falcons in service. It has engaged in more than 400,000 combat sorties and has a combined 19 million flight hours – while the aircraft has been adapted to complete a variety of missions ranging from air-to-air fighting, ground attack, and electronic warfare.

And it was even a contender the United States Air Force’s Enhanced Tactical Fighter (ETF) program with a radically-modified delta wing shape design that more than doubled the area of a standard F-16 wing.

However, the F-16XL, as it came to be known, began as the Supersonic Cruise and Maneuver Prototype (SCAMP), which was designed to highlight how supersonic transport (SST) aerodynamics had a place with military aircraft. Over two years it began as a largely theoretical and model-based test study, during which it was determined that a cranked arrow wing shape could provide vastly increased lift without any of the limitations that came with a delta wing when paired with an F-15A fuselage.

According to the website AVGeekery.com, General Dynamics invested heavily in the research and development of the delta-winged F-16XL, and it partnered with NASA to test more than 150 different configurations. That included some 3,600 hours in NASA wind tunnels.

In March 1981, the Air Force announced that it was looking to develop a new advanced tactical fighter to replace the F-111 Aardvark, and General Dynamics entered the F-16XL in the competition.

Two prototypes were built and these featured a fuselage that was lengthened by 56-inches, while the modified aircraft lacked the ventral fins, which weren’t required due to the delta wing that provided stability characteristics superior to the original F-16. However, despite the fact that the wing was larger and the fuselage length increased, the “XL” was not meant to stand for “extra large”.

From the tests, General Dynamics and the Air Force were able to demonstrate that the F-16XL could deliver double the range or payload of the original F-16.

“The F-16XL flight-test program has conclusively demonstrated that the XL performs as predicted,” explained D. Randall Kent, vice president and program director for General Dynamic’s F-16XL program, in a 1983 interview with Air Force Magazine. “This performance level represents a significant increase in mission capability for USAF. Coupling this with the affordability and low risk of the F-16XL presents USAF with a viable way to increase mission capability while simultaneously growing to a forty-wing TAC force structure.”

The F-16XL seemed to have all the merits the Air Force could have wanted, and yet in the end it opted to go with the McDonnell Douglas F-15E Strike Eagle. Among the factors was that the F-16XL would have required far more effort, time, and notably more money to put into production – while the Strike Eagle’s two engines meant it had more thrust and the ability to carry more weapons.

The ETF contract was awarded to McDonnell Douglas, and the two F-16XL prototypes were returned to the Air Force. The aircraft were placed in storage at Edwards Air Force Base (AFB), Mojave, California and that could have been the end of the story.

However, in 1988, the aircraft were taken out of storage and provided to NASA for further research. After receiving serial numbers #849 and #848, the planes were used in a program designed to evaluate aerodynamics concepts to improve wing airflow during sustained supersonic flight. Both aircraft were used in a variety of experiments that only concluded in 1999.

The aircraft were then placed in storage at NASA Dryden, but in 2007, NASA approached Lockheed Martin – which had acquired General Dynamics’ aviation business – to conduct further tests on the feasibility of returning one of the prototypes to flight status. However, the program ended in 2008, and both were retired and returned to storage.

One of the two F-16XL’s now remains in storage at the Air Force Flight Center Museum at Edwards, while the other is on display at the Museum Air Park.

Peter Suciu is a Michigan-based writer who has contributed to more than four dozen magazines, newspapers and websites. He regularly writes about military small arms, and is the author of several books on military headgear