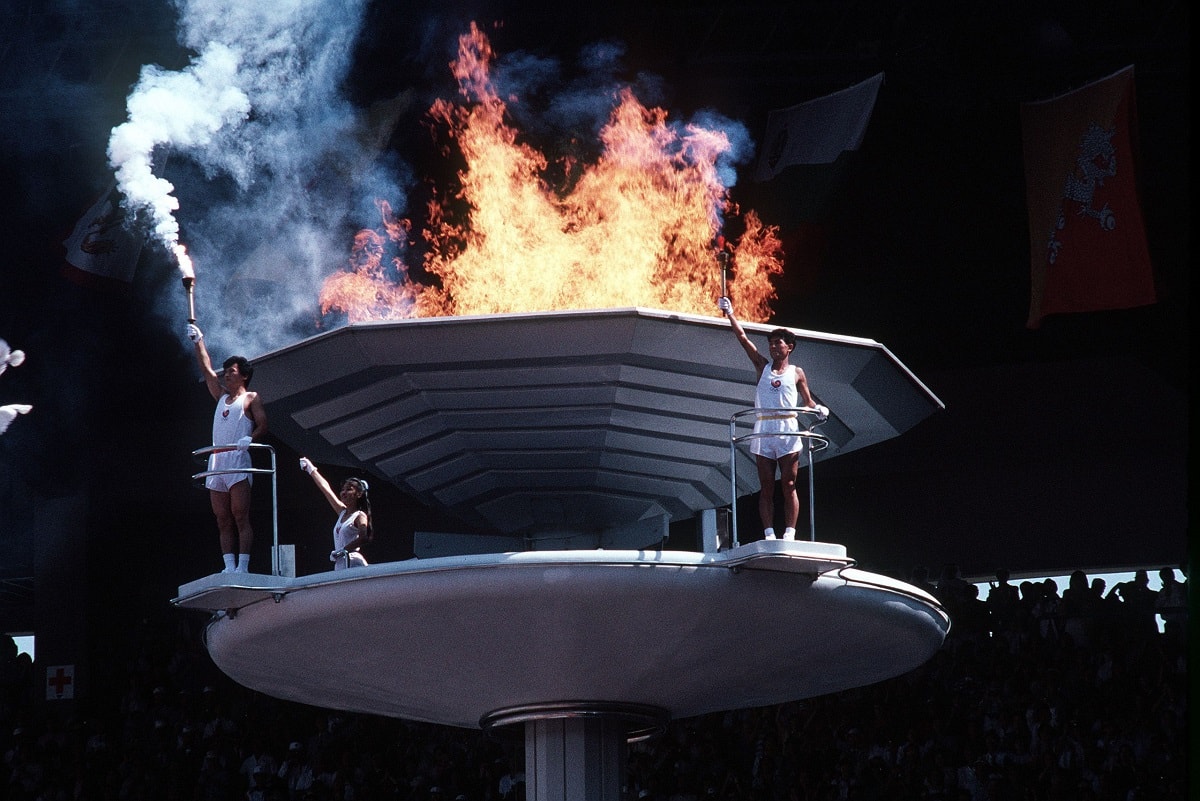 The 1988 Seoul Olympics represented a watershed moment for South Korea that had dramatic implications for the future of the country both domestically and in the international arena. The games were not, however, without controversy, and they became yet another battleground in the larger cold war on the Korean Peninsula between the North and the South. The years leading up to the games would see North Korea attempt to secure at least some of the economic and reputational benefits afforded to Olympics host nations for itself and, when that outcome was denied to it, the North would instead turn to violence in an effort to deny South Korea from acquiring those same benefits.

The Olympics Come to Korea

In September 1981, a South Korean delegation to the International Olympic Committee (IOC) succeeded in securing Seoul as the host city for the 1988 Summer Olympic Games, beating out Nagoya, Japan in the final vote. For South Korean President Chun Doo Hwan, the decision to host the 1988 Olympics likely served a number of political and economic objectives. Hosting the games would provide Chun with an opportunity to create a period of domestic political stability in the years leading up to the games while also presenting an image of stability to the outside world, and would also represent an opportunity to clearly demonstrate South Korea’s rapid economic growth to the international community. The ever-present threat from the North would also have factored into the decision, with the Chun regime likely hoping that by fixing the world’s attention on South Korea for much of the 1980s South Korea could both raise international awareness of the North Korean threat while also securing for itself an insurance policy of sort against North Korean aggression. Chun would not have had to look far for a compelling example of the benefits that could be accrued by hosting the games, needing only to look to Japan and its successful hosting of the 1964 games.

North Korea responded to South Korea’s successful bid for hosting the 1988 games with a diplomatic campaign aimed at securing itself as a cohost for the games. In 1985, North Korea began lobbying the IOC for split games, with half the events held in the North and the other half held in the South. North Korea would engage in four rounds of talks with the IOC, the last of which took place in July 1987. Despite repeated North Korean threats of violence aimed at disrupting the games, the negotiations ultimately came to nothing: the 1988 Olympic Games would remain an exclusively South Korean endeavor.

North Korean warnings of violence during negotiations with the IOC turned out to be far more than empty threats. On November 29, 1987, two North Korean operatives successfully smuggled a timed explosive device onto Korean Air Lines flight 858, which subsequently detonated and killed all of the 115 passengers and crew on board. Flight 858, which was en route to South Korea from Baghdad with a stopover in Abu Dhabi, was carrying a large contingent of South Korean nationals engaged in construction work in the Middle East as well as a South Korean diplomat and his family. According to the South Korean timeline of events, the two North Korean operatives who arrived in Baghdad via a circuitous route through Europe were posing as Japanese nationals, the duo boarded flight 858 for the flight’s first leg to Abu Dhabi, during which they deployed the explosive device onboard the plane. While attempting to escape through Bahrain, the operatives were detained by Bahraini authorities, with one of the pair committing suicide and the other taken into custody.

The captured operative, identified as Kim Hyon Hui, would ultimately confess to South Korean authorities her role in the bombing. Kim would also explain that her orders to bomb the plane could only have originated with either Kim Il Sung or Kim Jong Il, and that the order had been linked directly to the upcoming Olympic Games, with a senior North Korean official telling her that the goal was to create “chaos and confusion” in South Korea before the start of the games. The bombing was likely an attempt by North Korea to undermine South Korea’s ability to guarantee the safety of participants and spectators during the game, and in the process imposing reputational costs on South Korea and reducing or even eliminating the benefits of Seoul’s hosting of the games. Indeed, the CIA considered additional attacks by North Korea before or during the game to be a significant concern.

The Aftermath of the Games

Despite concerns about North Korean aggression, the 1988 Olympic Games proved to be a tremendous victory for South Korea, providing the country with significant domestic and international benefits. Domestically, the need to maintain internal stability to ensure that the games were not called off or moved to an alternate location likely contributed to Chun’s de facto successor Roh Tae Woo’s decision to hold direct presidential elections in response to mass pro-democracy demonstrations in 1987. Internationally, the games proved to be an important diplomatic boost for South Korea; in the aftermath of the games, Hungary became the first communist country to establish diplomatic ties with South Korea, while the Soviet Union and South Korea would expand their economic ties before also establishing formal diplomatic relations, which North Korean media described as an “act of betrayal.” The diplomatic recognitions afforded to South Korea in the aftermath of the Olympics likely contributed to the passing of United Nations Security Council Resolution 702 and the subsequent adoption of UN General Assembly Resolution 46/1 in 1991 which admitted both North and South Korea to membership in the United Nations.

The 1988 Olympic Games served to highlight the divergent fates of the two Koreas. While the 1988 Olympic Games proved to be a seminal moment for South Korea, for North Korea the games were a substantial setback. Not only did the opening of relations between South Korea and its communist bloc represent in Pyongyang’s view a betrayal of the North, but the admission of both Koreas to UN membership was also a fatal blow to North Korea’s claim to represent the only legitimate government on the Korean Peninsula.