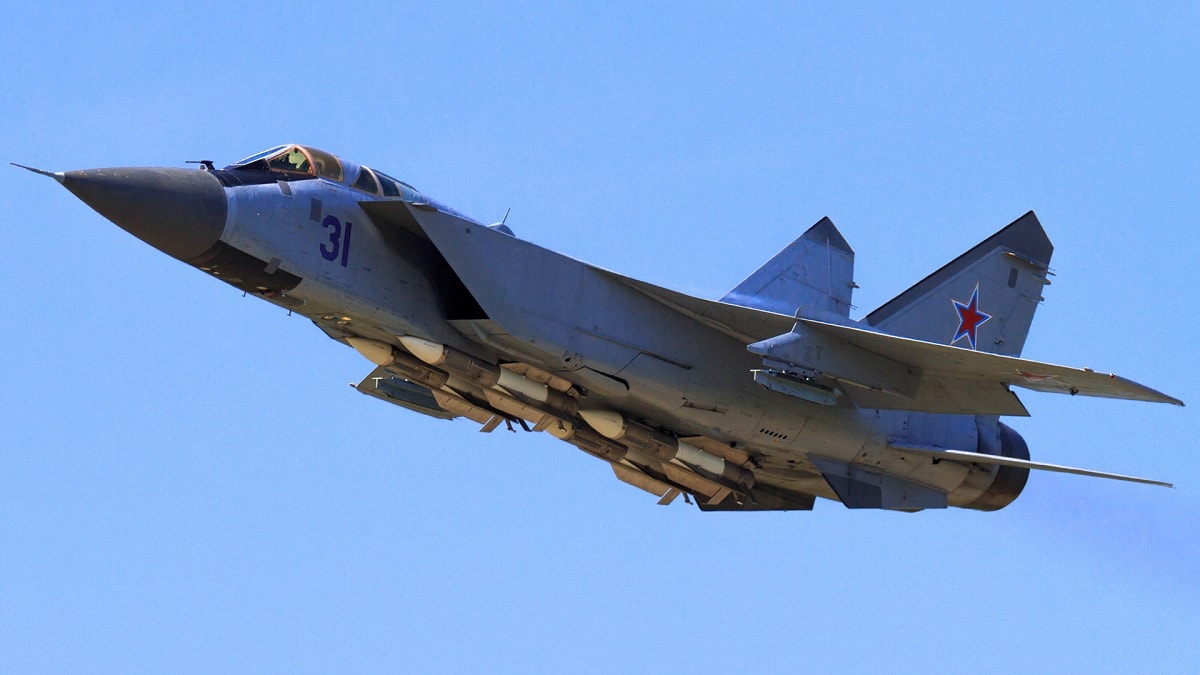 The Russian MiG-31 has been noted for its extreme speed – and it remains one of the fastest aircraft to serve in the Russian Air Force.

The multi-role fighter/interceptor can also mount hypersonic Kinzhal missiles and be used to deploy anti-satellite technology. Built as a home-defense interceptor, the aircraft has maintained a mystique in the west due to the fact that it was never widely exported.

Moscow maintains hundreds of the fighters, which serve as part of the nation’s multi-layered air defense network. The twin-engine MiG-31 (codenamed Foxhound by NATO) remains the fastest flying operational fighter, able to attain speeds over Mach 3 and fly up to 70,000 feet. The MiG-31 is a supersonic all-weather long-range fighter jet, and Russia has put the aircraft to the true test of “all-weather” by deploying the aircraft to a region known for extreme cold.

Russian state media has reported that a pair of the MiG-31 aircraft took part in a sortie over the North Pole earlier this month. The long-range interceptor aircraft, which are operated by the Russian Navy, is among the group of MiG-31s that have entered duty in the Arctic.

“Within the framework of an Arctic expedition for the first time ever in the history of Russia’s Navy a pair of MiG-31 jets performed a flight over the North Pole and were refueled in midair,” Adm. Nikolai AntolyevichYevmenov, commander-in-chief of the Russian Navy, told Tass.

This report follows the news that groups of the MiG-31 had entered duty in the region according to Pacific Fleet commander Adm. Sergey Avakyants.

The deployment of the MiG-31 suggests Russia intends to remind the west that it sees the Barents Sea and Arctic region as vital to its national security. The Foxhound is certainly equipped to defend the region from enemy incursions.

The aircraft’s armament includes R-33 long-range missiles, codenamed the AA-9 Amos by NATO. The R-33 have been considered the Soviet equivalent to the AIM-54 Phoenix missiles used by U.S. Navy F-14s—the large radar-guided missiles were mounted under the MiG-31’s belly for engaging opposing bombers at long ranges of up to seventy-five miles. Moreover, the MiG-31’s radar enables it to launch at up to four aircraft simultaneously. Four to six additional medium- or short-range air-to-air missiles could be mounted under the wings. It is also armed with a 23-millimeter cannon.

It isn’t just the MiG-31 that has been deployed to the extreme north either. Earlier in March, the Russian military began to conduct combat training exercises of the upgrade MiG-29K (NATO reporting name: Fulcrum-D) from the Novaya Zemlya archipelago in the arctic. The goal of the operations has been to increase the zone of controlled airspace over Russia’s northern sea routes, including those in the Barents Sea.