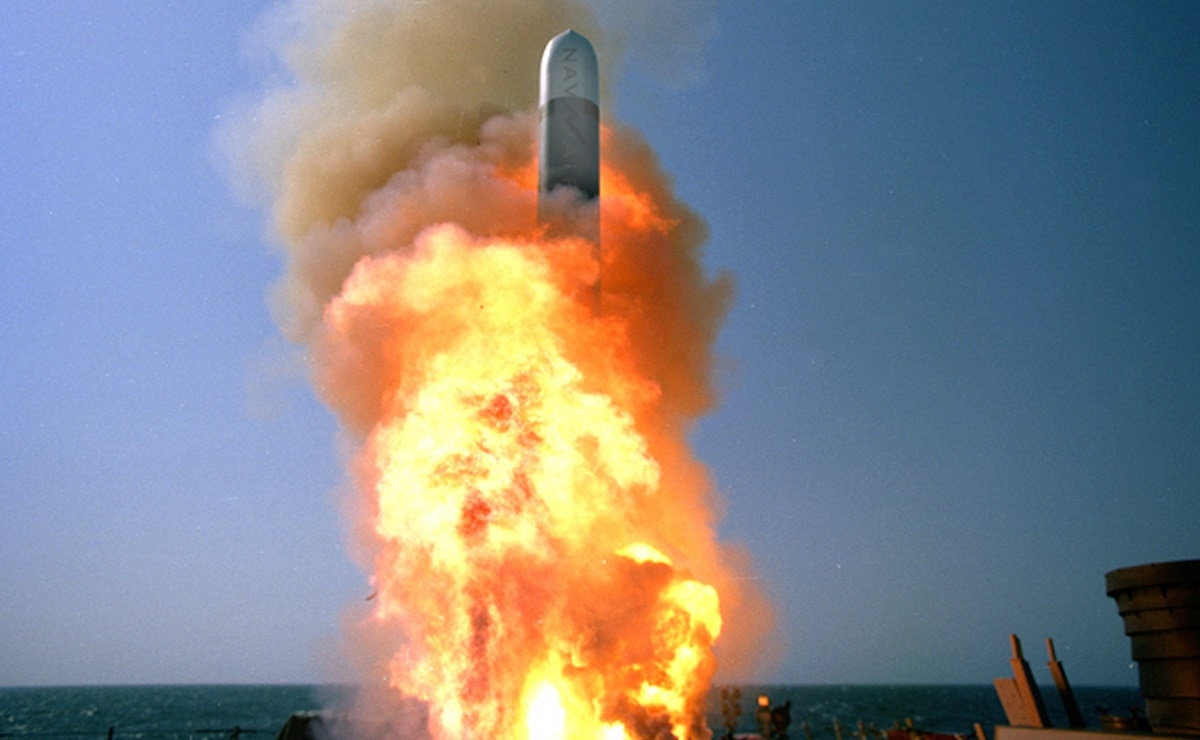 030508-N-0000X-001 At sea aboard USS Stethem (DDG 63) Ð A Tactical Tomahawk Cruise Missile launches from the guided missile destroyer USS Stethem (DDG 63) during a live-warhead test. The missile traveled 760 nautical miles to successfully impact itÕs intended target on San Clemente Island, part of the Naval Air Systems Command (NAVAIR) test range in Southern California. The Tactical Tomahawk is the next generation of Tomahawk cruise missile, adds the capability to reprogram the missile while in-flight to strike any of 15 preprogrammed alternate targets, or redirect the missile to any Global Positioning System (GPS) target coordinates. It also will be able to loiter over a target area for some hours, and with its on-board TV camera, will allow the war fighting commanders to assess battle damage of the target, and, if necessary redirect the missile to any other target. Launched from the Navy's forward-deployed ships and submarines, Tactical Tomahawk will provide a greater flexibility to the on-scene commander. Tactical Tomahawk is scheduled to join the fleet in 2004. U.S. Navy photo. (RELEASED)

In a recent statement, the U.S. Navy announced that the first of the new Block V Tomahawk missiles had been received from Raytheon, the Tomahawk manufacturer. “This is the next big advancement in Tomahawk capability, and a major achievement for the program,” a program manager for the Tomahawk Weapons System program explained. “We’re focused now on delivering advanced capability to the fleet by recertifying and modernizing our Block IV inventory, and by contracting production Block V missiles.”

Tomahawk Cruise Missile: A Legend That Can Now Kill Warships

The Tomahawk cruise missile has been a U.S. Navy mainstay since it was first introduced in the 1980s, and has repeatedly proven itself in multiple combat deployments. According to Raytheon, the Tomahawk has been flight-tested about 550 times, and used in actual combat around 2,300 times, making it arguably one of, if not the most combat-tested weapon in American military service.

Though the Tomahawk is typically launched from U.S. Navy ships via Vertical Launch System containers, though they can also be launched horizontally from submarine’s torpedo tubes, or from a vertical launch system broadly similar to the kind used on a surface ship.

Newer Tomahawk variants — including the new Block Vs — have a long 1,000 mile range, or over 1,600 kilometers. And while long stand-off ranges are of obvious value, perhaps one of the places the Tomahawk could be most effectively put to use is the Pacific. Though typically fired from naval assets both on and below the water, the Tomahawk could also be adapted for land launch from a containerized missile launcher — a configuration that would fit quite well within the Marine Corps’ new force posture in the Pacific.

As the Corps transitions from operating as a sort of second Army in the Middle East to a nimble, more agile amphibious assault force, one of their primary tasks would be to seize enemy-held islands throughout the Pacific. This task would be somewhat similar to the Marines’ Second World War island-hopping campaign, though updated for the 21st century.

Spread throughout the Pacific on remote specks of land, far-flung Marines would not only defend austere beachheads but also use standoff weapons to keep enemy ships at bay and deny them the use of land. Block V Tomahawk missiles could excel in this capacity as a long-range weapon that would push enemy ships far out to sea.

Mounting containerized Block V Tomahawks to mobile launchers could also afford them a “shoot-and-scoot” capability in which trucks carrying multiple Tomahawks drive out of hidden protected shelters, quickly launch a salvo of missiles, and drive back to safety before they can be found and targeted. It wouldn’t be too much of a stretch to imagine Marine drivers at the wheel on remote Pacific islands, targeting ships in the Pacific and remaining hidden.