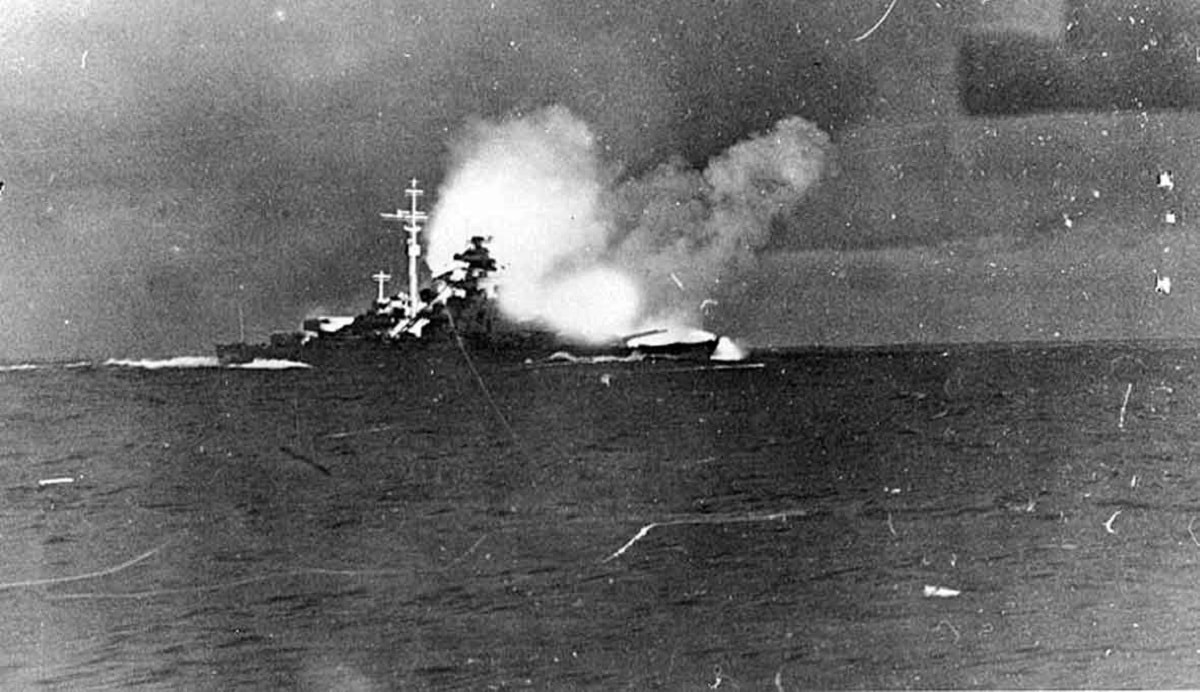 For twenty years, HMS Hood, the lead ship of her class of four planned battlecruisers, was the largest warship in the world. Sadly, her demise was a tragedy that shook the Royal Navy for decades–and was the end of an era/

Construction on her began during the First War, yet she wasn’t commissioned until 1920 – by which time the other planned ships of her class were canceled, yet her prestige was so great it was reflected in the nickname, “The Mighty Hood.”

In fact, until the commissioning of the new aircraft carrier HMS Queen Elizabeth there had never been a larger warship than HMS Hood.

By the outbreak of the Second World War, she was outclassed by more modern ships yet together with the newly commissioned battleship HMS Prince of Wales was sent with other Royal Navy warships in pursuit of German ships. On May 24, 1941, HMS Hood engaged the German Kriegsmarine heavy cruiser Prinz Eugen and the battleship Bismarck.

As a battlecruiser, Hood was similar in size and had the offensive capability of a battleship but had less armor, which enabled her to reach higher speeds. She was equipped with eight 15-inch guns and could reach speeds of upwards of 32 knots. She displaced 41,200 tons and was 860 feet in length, with more than 1,400 sailors serving onboard.

“Hood was the largest ship in the Royal Navy until our two new aircraft carriers,” Rear Adm. Philip Wilcocks, president of the HMS Hood Association, told BBC Radio’s Good Morning Scotland in an August 2018 interview. “She was, in the inter-war years, the iconic figure for the Royal Navy, for the country, and in those days, for the Empire.”

The lack of heavy armor sealed her fate.

While separated by ten miles of sea, the warships began a naval duel that was likely as intense as anything in the fictional world of superheroes and giant monsters. At the time Bismarck was arguably the most powerful warship in commission; a true battleship and clearly Bismarck had the advantage.

In what has been described as a “misguided attempt to close the range rapidly,” Hood and Prince of Wales gave away whatever tactical advantage they had at the initial contact and instead held to their original course. That allowed the Germans to pass ahead. Both German warships opened fire.

HMS Hood took several direct hits – the first of which were from the Prinz Eugen and then additional hits from Bismarck – with some shells landing near her ammunition magazines, which quickly exploded. Despite the prestige, The Mighty Hood was soon lost. Of the crew of 1,415 sailors only three survived.

The loss of the Hood was taken hard by the Royal Navy, which began a pursuit of Bismarck. The German battleship had been damaged in the fight and tried to make for the coast of occupied France. Three days later, the pride of the German Kriegsmarine was hunted down and hit multiple times by torpedo aircraft, incapacitating the battleship, which was sunk by a ring of British warships. A total of 2,200 German sailors were lost, while just 111 were rescued.

The loss of the Bismarck was a devastating blow for Germany, but the cost was The Mighty Hood – a trade-off few would have wanted to make.