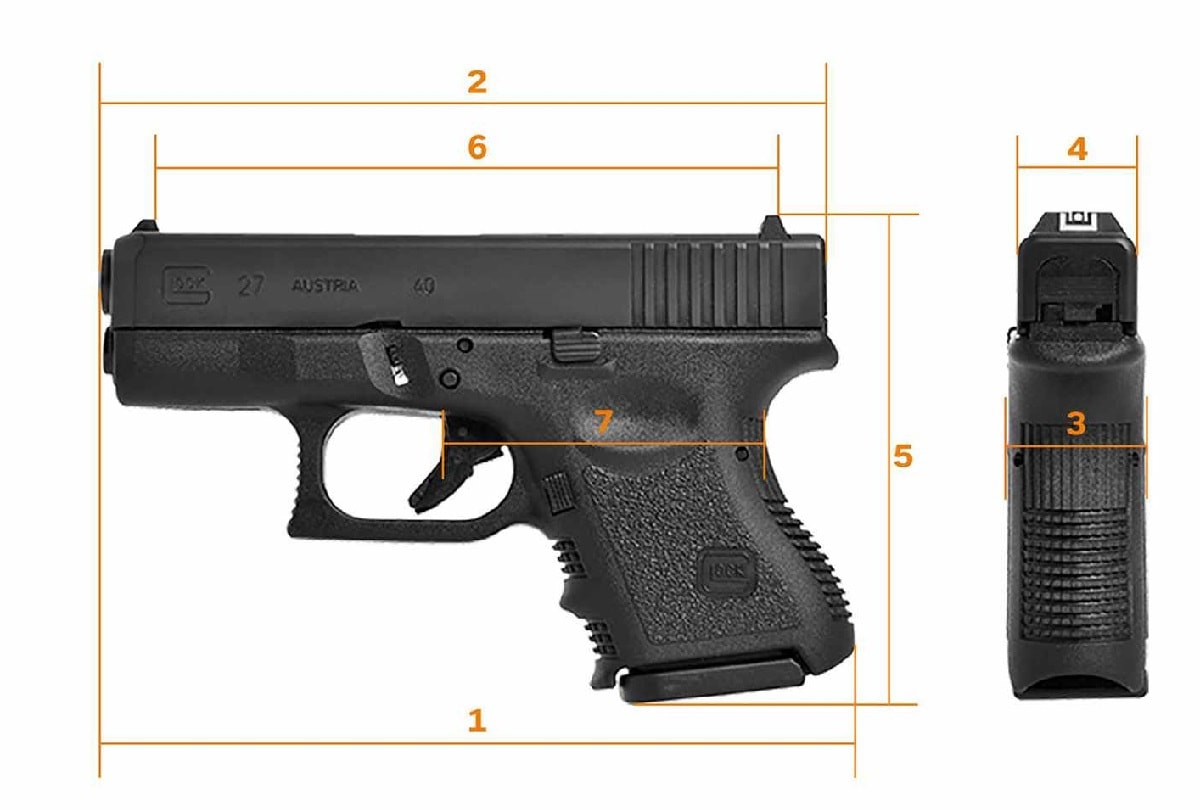 Glock’s line of pistols is incredibly diverse — whether you’re looking for a compact, subcompact, standard, or long slide, there are a number of options. The calibers available to choose from are also quite diverse, from the large diameter .45 ACP, to the diminutive .22 LR as well as many in between, including the .380, 9x19mm as well as the powerful .40 S&W.

One of the more noteworthy of Glock’s subcompact pistols is the G27, a very small and concealable though still hard-hitting pistol. The G27 is chambered in .40 S&W, a very versatile cartridge that bridges the gap between the heavy .45 ACP and the more lightweight 9x19mm cartridges. The .40 S&W also has the added benefit of a similar trajectory and recoil as the 9X19mm, making the transition to the larger caliber round easier.

As a subcompact pistol, the G27 doesn’t have quite the magazine capacity of its full-sized counterparts in the Glock lineup, with a standard magazine accepting 9 rounds. It can however accommodate other, larger 22-round magazines, though doing so would of course negate much of the G27’s compactness.

Though certainly a versatile backup subcompact, with the release of the Gen 5 update, Glock has made the G27 even better.

The G27 is built around Glock’s Marksman Barrel, a type of “enhanced barrel rifling based on the proven polygonal barrel design which delivers improved accuracy.” According to the Austrian manufacturer, their polygonal rifling provides a better gas seal between the bullet and the barrel wall. This has the double benefit of keeping gas behind the bullet, as well as less bullet deformation during firing. Both of these factors can contribute to less barrel fouling, greater bullet velocities, less wind resistance, and better accuracy. In the case of the G27, the barrel is 87mm or 3.43 inches long.

One of the other Gen 5 improvements is the pistol’s grip. Gone are the finger grooves of previous variants, and in their place is a grooveless grip, retextured to provide a better tactile surface. The all-metal slide has also been redesigned and features additional serrations on the front of the slide in addition to the rear serrations. Like the redesigned grip texturing, the slide serrations provide a better grip surface with which to load a cartridge into the G27’s chamber.

Despite the G27’s small size, it’s a potent backup gun that Glock says has made it very popular across the United States as a backup weapon.

Combined with its Gen 5 redesign, the G27 is a solid choice that combines excellent stopping power with a very small platform.