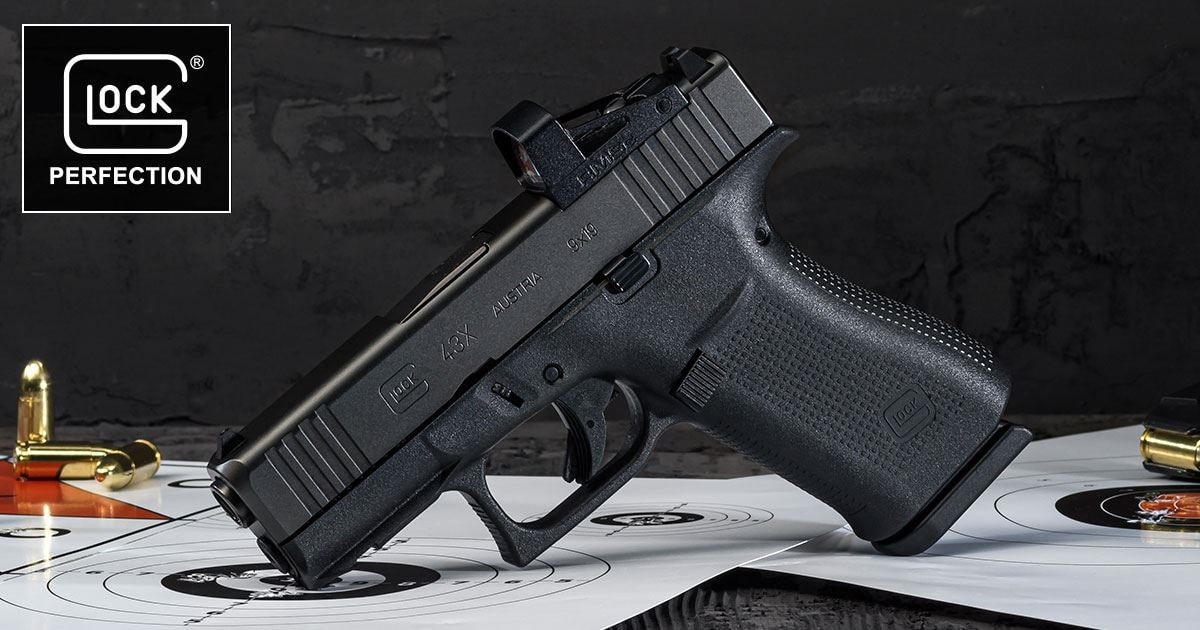 Glock’s G43X MOS is a subcompact pistol and part of their Slimline series, essentially thinner, lighter pistols with a more minimal profile. It has a number of features that set it apart from other Glocks.

First, the G43X MOS’s thin profile is made possible by using thin single-stack magazines. This design choice was a significant change for the company, as they have tended to favor double-stack magazines in the past. While this offers the G43X MOS a lower 10-round magazine capacity, it offers a thinner magazine, and therefore a thinner grip than would otherwise be possible with double-stacked magazines — a helpful feature for a pistol meant to be easily concealed.

The pistol is named G43X MOS — for Modular Optic System. The MOS configuration allows the G43X MOS to mount a variety of optical sights directly to the pistol’s slide, which when mounted, allows for “faster target transition and quicker sights acquisition of your target,” according to the Glock website. In the case of the Slimline group of Glocks, cuts are made into the pistol’s slide for micro-optic mounting and are covered with a removable cover plate.

The G43X MOS also features Glock’s Marksman barrel, a polygonally rifled barrel with “enhanced rifling” for improved accuracy. In contrast to most traditional barrels which have rifling grooves scored in the inside of the barrel, Glock pistols forego traditional rifling scores and are instead polygonal.

Supporters of this barrel rifling choice point to advantages: polygonal barrels can offer a better gas seal between the bullet and the barrel, as well as less lead or copper fouling, essentially metallic buildup caused when firing. Bullets fired from polygonal barrels can also exhibit less deformation after exiting the barrel, translating to less air resistance and better accuracy. Polygonal barrels may also have more consistent barrel thickness and therefore greater strength throughout the length of the barrel.

The G43X MOS is chambered in the ubiquitous 9x19mm pistol cartridge, a logical choice when considering the pistol’s slim, subcompact design. Additionally, the G43X MOS features a smoother, reduced trigger pull compared to other Glock pistols, a boon to accuracy.

The G43X MOS’s slide is metallic, and is finished with an nDLC finish, essentially a dark, non-reflective finish that offers tough corrosion and scratch resistance for better durability. In addition, the G43X MOS’s slide features serrations on the front to offer a better grip surface than a non-serrated slide.

Though the G43X MOS’s slide is metallic, the pistol’s frame is Glock’s signature polymer that absorbs some of the pistol’s recoil while reducing overall weight. In the case of the G43X MOS, the frame also has a beavertail-style design that affords shooters a tight, high grip on the pistol.

Given the G43X MOS’s slim design, it is no surprise the pistol has been a popular choice for those in the market for a compact, concealable pistol. Glock’s reputation for quality and reliability lives on.