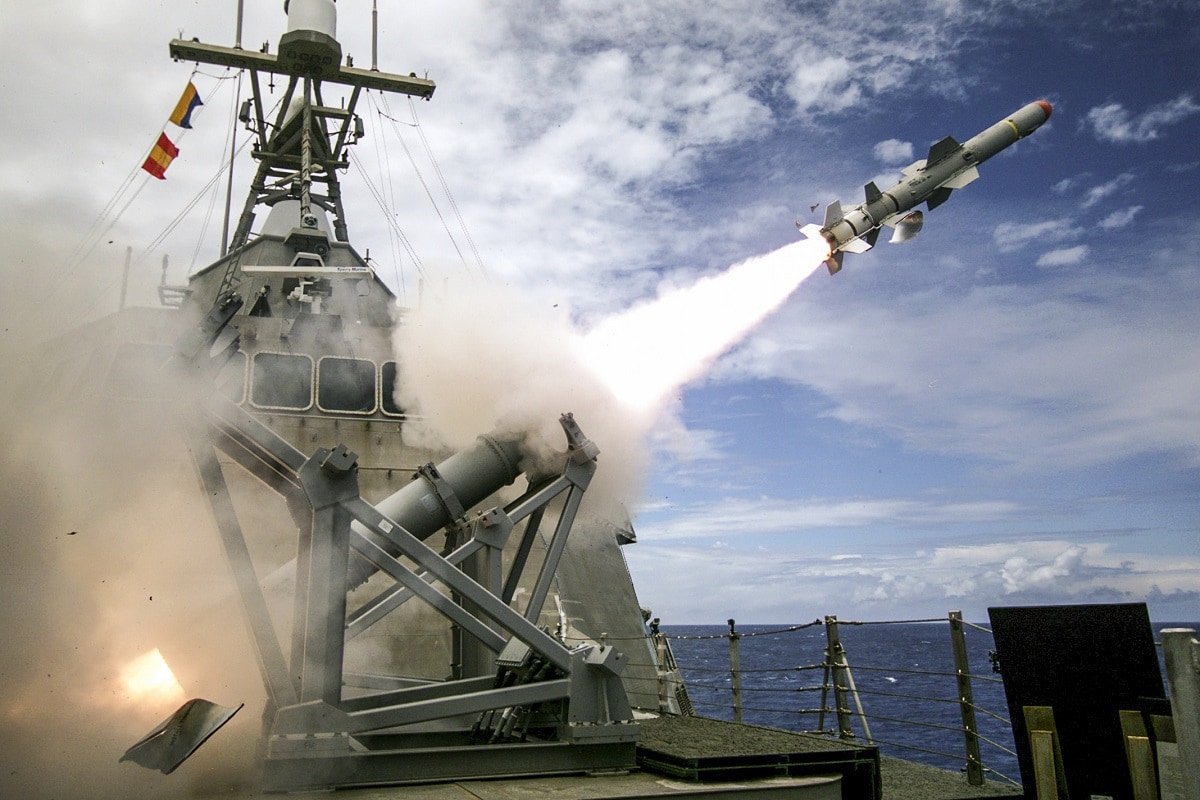 160719-N-ZZ999-112 PACIFIC OCEAN (July 19, 2016) USS Coronado (LCS 4), an Independence-variant littoral combat ship, launches the first over-the-horizon missile engagement using a Harpoon Block 1C missile. Twenty-six nations, 40 ships and submarines, more than 200 aircraft and 25,000 personnel are participating in RIMPAC from June 30 to Aug. 4, in and around the Hawaiian Islands and Southern California. The world's largest international maritime exercise, RIMPAC provides a unique training opportunity that helps participants foster and sustain the cooperative relationships that are critical to ensuring the safety of sea lanes and security on the world's oceans. RIMPAC 2016 is the 25th exercise in the series that began in 1971. (U.S. Navy photo by Lt. Bryce Hadley/Released)

In March, the Royal Thai Navy conducted a historic firing of a Harpoon Block 1C missile at a target some fifty-five nautical miles away. Introduced in 1985, the Block 1C differs from previous iterations in its flight path, guidance and target technology.

According to Navy Recognition, while the Block 1B and 1A could perform either a low apogee pop-up trajectory or a sea-skimming approach in its terminal phase, the Block 1C can perform both. A change in fuel increased its range, while the new variant has a higher altitude in the first part of its flight path to avoid friendly ships as well as other landmasses that may be in the missile’s path.

The Harpoon has been described as the world’s most successful anti-ship missile, and it is currently in service with the armed forces of more than thirty nations. It has been regularly upgraded over the years, and this has led to the development of the standoff land attack missile (SLAM) and the SLAM expanded response (SLAM-ER).

Originally developed by McDonnell Douglas for the United States Navy in the 1970s, the Harpoon missile has been adapted for use on Boeing B-52H Stratofortress bombers, which can carry eight to twelve of the missiles. First deployed in 1977 as an all-weather, over-the-horizon, anti-ship missile system, the Harpoon utilizes a low-level, sea-skimming cruise trajectory with active radar guidance. It is capable of executing both land-strike and anti-ship missiles.

According to Boeing, which currently produces the Harpoon, to strike targets on land as well as ships in port, the Harpoon utilizes GPS-aided inertial navigation to hit a designated target aimpoint. Its 500-pound blast warhead is able to deliver lethal firepower against a wide variety of land-based targets including coastal defense sites, surface-to-air missile facilities, exposed aircraft and even critical infrastructure including port and industrial facilities.

In conventional anti-ship missions, including those in the open ocean or near-land, the GPS/INS (inertial navigation system) provides midcourse guidance to the target area, while accurate navigation solutions further allow users to discriminate target ships from islands and non-target vessels.

They Can Strike From Anywhere

Harpoon missiles are capable of being launched from surface ships, submarines, shore batteries and from naval aircraft including the F/A-18A-F and Lockheed P-3C Orion anti-submarine and maritime surveillance aircraft.  Ship-, submarine- and shore-launched Harpoons require a booster for launch, while air-launched Harpoons are fired without the need of a booster and generally start the engine after aircraft separation.

In 1998, an advanced upgrade to the Harpoon missile was developed. This Harpoon Block II missile incorporates GPS-assisted inertial navigation, which enables the system to have both an anti-ship and a land attack capability. However, the Block II version was not adopted by the U.S. Navy, yet it has been integrated on foreign F-16 aircraft and is presently being integrated on foreign F-15 aircraft.

The air-launched missiles utilize a Teledyne turbojet/solid propellant booster for surface and submarine launch. It has a three-foot wingspan with booster fins and wings, and measure just over twelve and a half feet in its air-launched version, while the surface- and submarine-launched model measures fifteen feet.

In February it was announced that Boeing began work to return the Harpoon to operational status in the U.S. Navy’s submarine force after a more than 20-year absence.

At present, more than 600 ships, 180 submarines, twelve different types of aircraft, and several land-based launch vehicles across the world are integrated with Harpoon missiles according to Boeing. The Cold War platform is thus ready for the challenges of an ever-changing world.