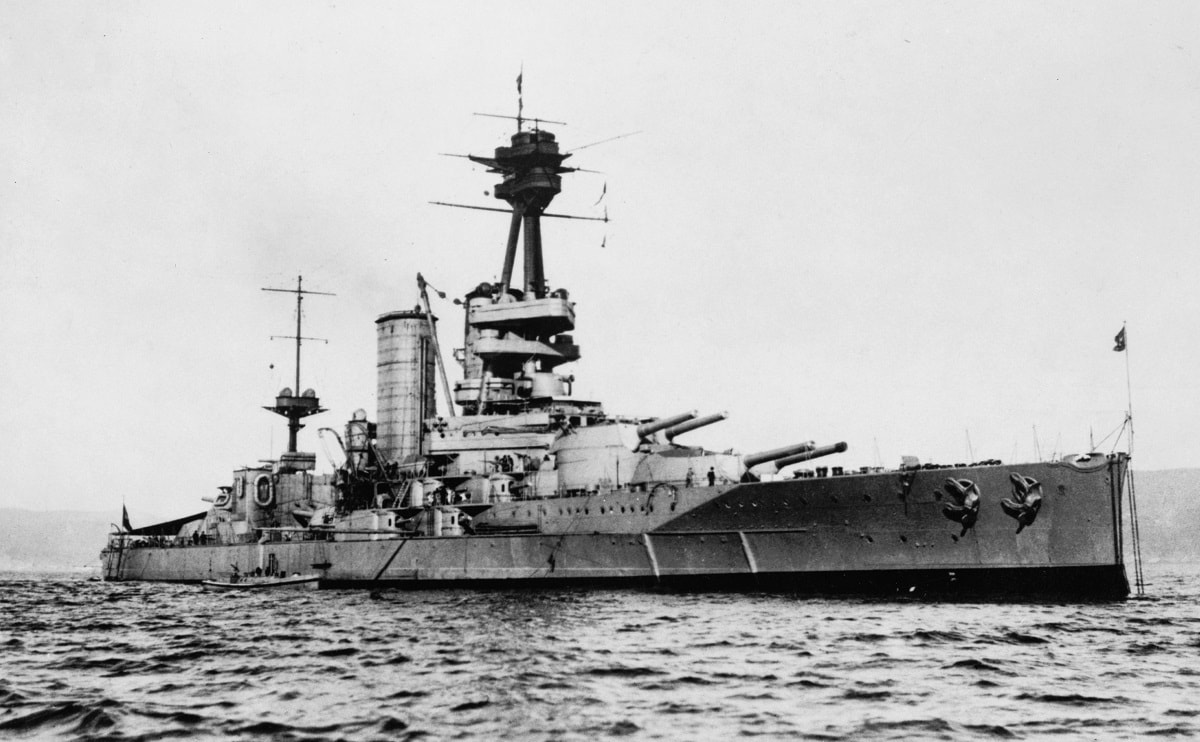 The Chilean battleship Almirante Latorre in 1921. She also went by the name HMS Canada during World War I.

Few warships have as unique a history as HMS Canada, a battleship built for Chile that saw action at Jutland and almost ended up in the service of the United States Navy after Pearl Harbor.

In the years leading up to the First World War, the United Kingdom built warships for sale to other countries. Two of the warships – Reşadiye and Sultân Osmân I Evvel – were originally destined for the Ottoman Empire. When the war broke out, then First Lord of the Admiralty Winston Churchill ordered all ships in construction for export be suspended or requisitioned.

Then there was Almirante Latorre, a super-dreadnought battleship that was being built for the Chilean Navy (Armada de Chile). She was one of two planned warships that were purchased by the South American nation, which was embroiled by a naval arms race that was started when Brazil purchased the British-built dreadnought Minas Geraes.

To further show how complicated matters were at the time, Brazil also ordered an even more advanced warship, Rio de Janerio, but when the nation’s rubber boom collapsed and its relations with Argentina improved, the vessel was resold to the Ottoman Empire as the aforementioned Sultân Osmân I Evvel.

However, Chile still moved ahead with Almirante Latorre as the government in Santiago sought to modernize its navy. When World War I broke out in August 1914, the British requisitioned the two warships bound for the Ottomans but struck an agreement with Chile under which the warship, which had only been launched less than a year earlier, would be completed at British Command.

It was then to be on “loan” for the duration of the conflict. The deal was formalized in early September 1914 just as the first battles of the war were raging on the Western Front. The British were able to maintain friendly relations – crucial due to their reliance on Chilean sodium nitrate for munitions.

The warship was completed and renamed HMS Canada and modified accordingly for British service. She was commissioned into the Royal Navy on October 15, 1915 – but despite her name, she was a Royal Navy warship crewed by British, not Canadian personnel.

The 28,600-ton battleship served as part of the 4th Battle Squadron, and she saw action in the Battle of Jutland from May 31 to June 1, 1916, under the command of Captain William Nicholson. During the sortie, she fired a total of forty-two rounds from her 14-inch guns and more than one hundred rounds from during the battle.

After the battle, she was transferred to the 1st Battle Squadron and was among the vessels to arrive with the occupation force in Constantinople at the end of the war. Soon after, she was put into the reserve fleet.

It was only in late 1920, after the UK offered many of its surplus warships to Santiago that the Chilean government finally received the vessel. This came despite the fact that there had been concern that had Chile regained its title of “the first naval power in South America” a new naval arms race would begin anew.

The British provided the soon-to-be renamed Almirante Latorre and four destroyers, and the total cost for the five warships was less than a third of what Santiago had been due to pay just for the battleship in 1914. She remained the flagship of the Chilean Navy and underwent a modernization in 1929.

Due to financial strains on Chile, the modernization was never fully completed and she was instead mothballed in the mid-1930s. The United States had learned in 1939 that the Soviet Union had at one point sought to buy the ship, but it was Washington after the attack on Pearl Harbor actually offered to purchase Almirante Latorre to bolster the United States Navy. The offers were declined, and the warship only took part in neutrality patrols along the coast of South America for the remainder of the Second World War.

A fire damaged the warship in the early 1950s, and she was finally decommissioned in 1958 – as one of the last warships built for export in the UK.