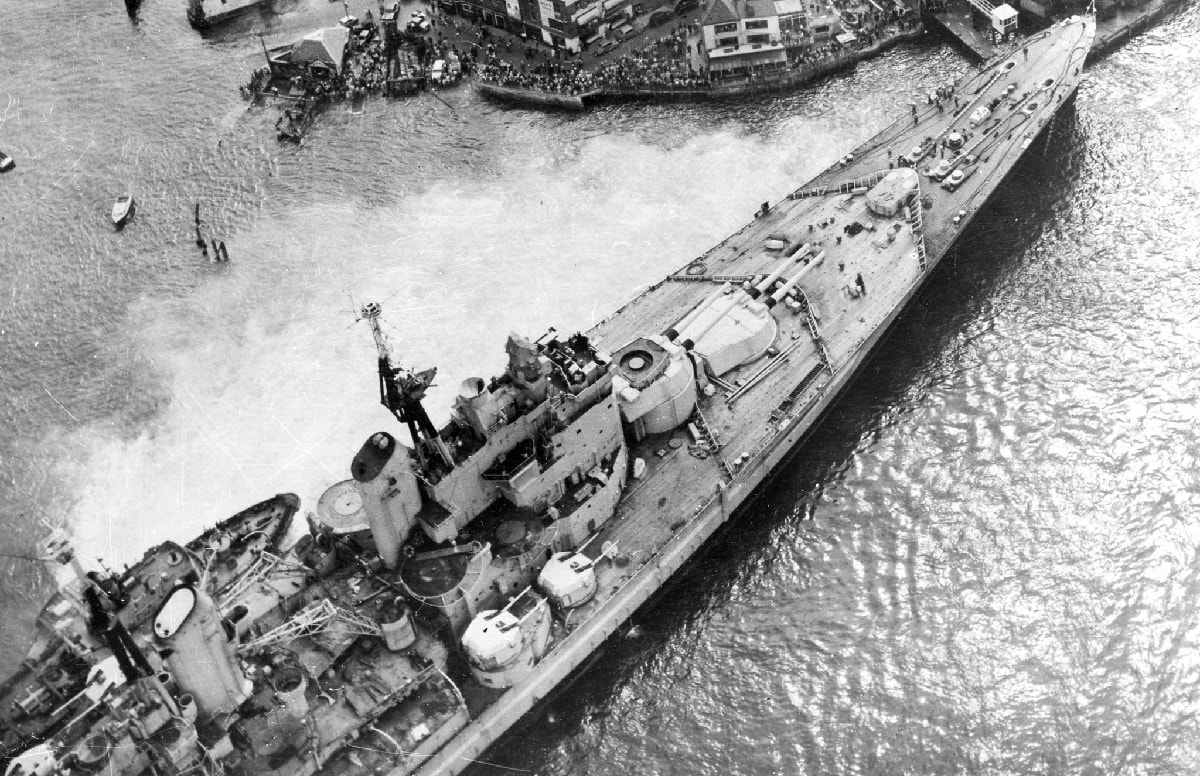 The Royal Navy had been able to maintain its dominance over rival navies both in sheer numbers, but also in having the most advanced warships of the era. It was a tradition that dated back to the HMS Victory, commissioned in 1778, and then with HMS Warrior (1860) and most notably with the development of HMS Dreadnought in 1906.

The result was HMS Vanguard.

Development of more powerful battleships began in the late 1930s when the British military believed it would be outnumbered by the combined German and Japanese battleship fleets. She was laid down in 1941 at Clydebank, and incorporated improvements to the King George V-class including lessons learned from the sinking of the second ship of the class HMS Prince of Wales. That included replacing the planned 20mm anti-aircraft mounts with 40mm guns – of which HMS Vanguard carried seventy-three.

Originally designed with 16-inch guns, it was determined it would be too time-consuming to produce – and likely too expensive for a nation fighting for her very life – so the warship was modified to use existing 15-inch guns. The gun mountings were also removed from the battlecruisers HMS Courageous and HMS Glorious when those two warships were converted to aircraft carriers.

While modernized to World War II standards, it was a controversial decision to employ the guns – especially as the ten U.S. Navy modern battleships, as well as the HMS Nelson-class, were outfitted with 16-inch main guns. A concern was that the four sets of the twin Mk I 15-inch guns lacked the range or armor penetration of the more recent and larger weapons.

She was also fitted with sixteen 5.25-inch heavy secondary guns for close-in fighting, with those situated as eight double mounts – four on each side of the ship. Able to attain a top speed of thirty knots, the battleship was constructed with a beam of 108-feet, which would have allowed her to pass through the Panama Canal.

Construction of the warship stopped and restarted during the war, and as a result to modifications being made to address wartime experience. HMS Vanguard wasn’t completed until after the war ended, and by the time she entered service she was essentially a relic – time had already passed her by as the age of the massive battleship had come to an end. She never fired her guns in anger and never was engaged in combat.

However, she remained a symbol of the Royal Navy in the post-World War II era. In 1947, she became a Royal Yacht, and was used by the Royal Family of King George VI on a trip to South Africa. HMS Vanguard was taken out of service in 1955 and became the flagship of the Reserve Fleet a year later.

Among the notable and final accomplishments was serving as the sets for the 1960 film Sink The Bismarck – noteworthy that she was developed in response to such enemy warships. With the retiring of the King George V-class, Vanguard became the last British battleship.

There were calls by some in her crew for Vanguard to be saved as a museum ship, the last of her kind. Instead, she met the same ignominious end of too many great warships – she was sold for scrapping in 1960 less than twenty years after she was laid down. It was the end of a short and rather quiet career for Britain’s battleship but for the age of the battleship as well.

Only the United States Navy’s Iowa-class battleships, which were also built during the war, would ever take to the seas again.