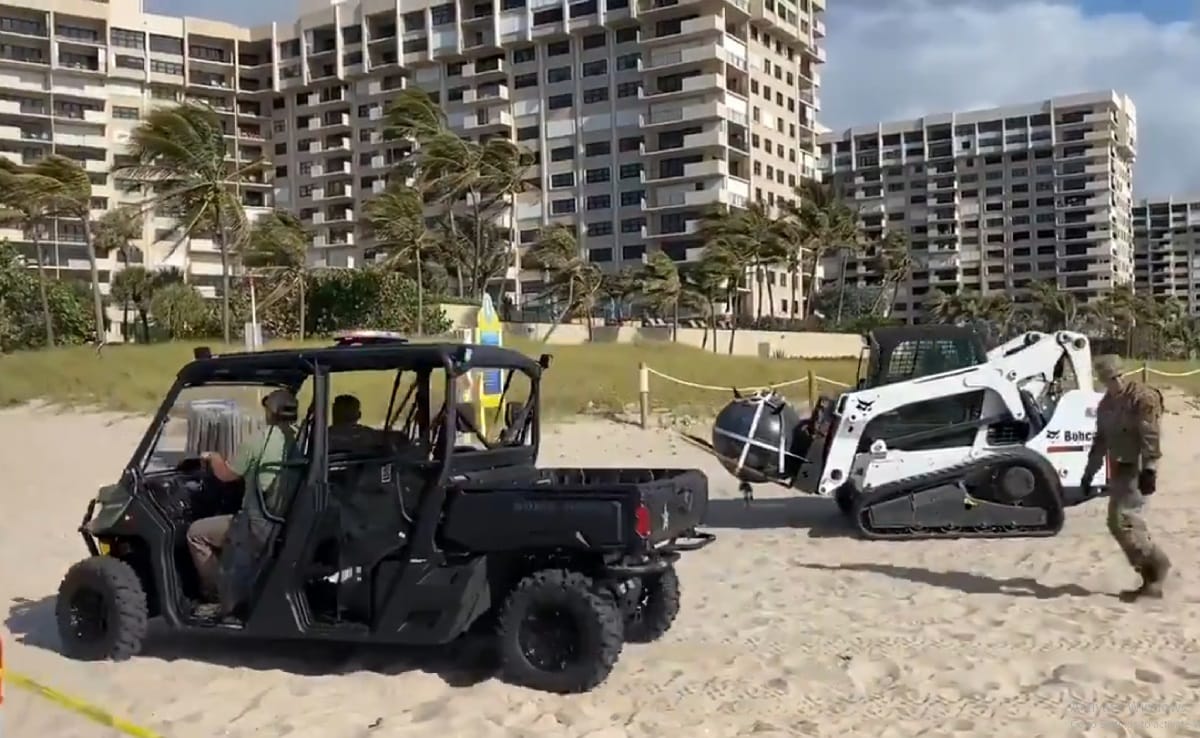 A sheriff’s deputy in Lauderdale-By-The-Sea, a small beachfront town just north of Fort Lauderdale, early Sunday morning discovered something worse than the remnants of a rowdy spring break party. Instead, in what might seem reminiscent of a plot from the 1960s sitcom Gilligan’s Island, the deputy found what was believed to be a sea mine that washed ashore.

CNN reported that at around 2:30 am on Sunday a possible military explosive training device was located on the shore of the popular Florida beach.

The beach was closed most of the morning. While the mine – which was likely only a training device – had the words “inert” and “property of the U.S. Navy” written on it, the Broward County Sheriff’s Office took no chances after it was determined it could be a “possible military explosive device.” The county’s bomb squad, as well as the U.S. Air Force, was called in, and after it was determined the mine was safe, it was moved to an undisclosed location. The beach reportedly reopened after 10:15 am on Sunday.

Naval mines such as the one that washed ashore had been used during the First and Second World Wars and in many other conflicts around the world. These are self-contained explosive devices that could be placed in water to damage or destroy an enemy’s surface ships or submarines.

As the mine was clearly marked “inert” it was likely a “dummy device” used in training purposes, but as Parker Branton, a reporter for the local ABC news affiliate, noted on Twitter, “‘Inert’ can mean that it is a dummy device used for training, but according to military sources that doesn’t rule out that it could’ve been active at one point.”

Branton also shared a video of the mine being moved off the beach.

The device is now reportedly in the custody of the United States Air Force. The U.S. Navy has not responded to multiple media requests to help determine how the mine may have ended up on the Florida beach.

This is not the first time in recent years that a U.S. Navy mine has been found near an American beach. In August 2018, local boaters near the Brownsville Marina off the coast of Washington spotted a mine, according to a report from The New York Times. It was then determined by the U.S. Navy that the mine was from an exercise conducted in 2005 by Naval Undersea Warfare Command.

While the type of mine found in Washington wasn’t identified and based on the photos from Florida, the training mine could have been an inert version of the Mk-6 moored contact mine, which was the mainstay of the Navy’s undersea arsenal for decades. It was used from 1917 to 1985.

Since the Second World War, mines have actually damaged more U.S. Navy warships than air or missile attacks. A total of fourteen U.S. Navy vessels were damaged by mines, compared to just four from air/missile attacks. During the Korean War, mines laid by North Korea also accounted for seventy percent of the casualties suffered by U.S. naval vessels, including the loss of four ships.

In this article:Military, Mine, Mine on Beach, Navy, U.S. Military, U.S. Navy