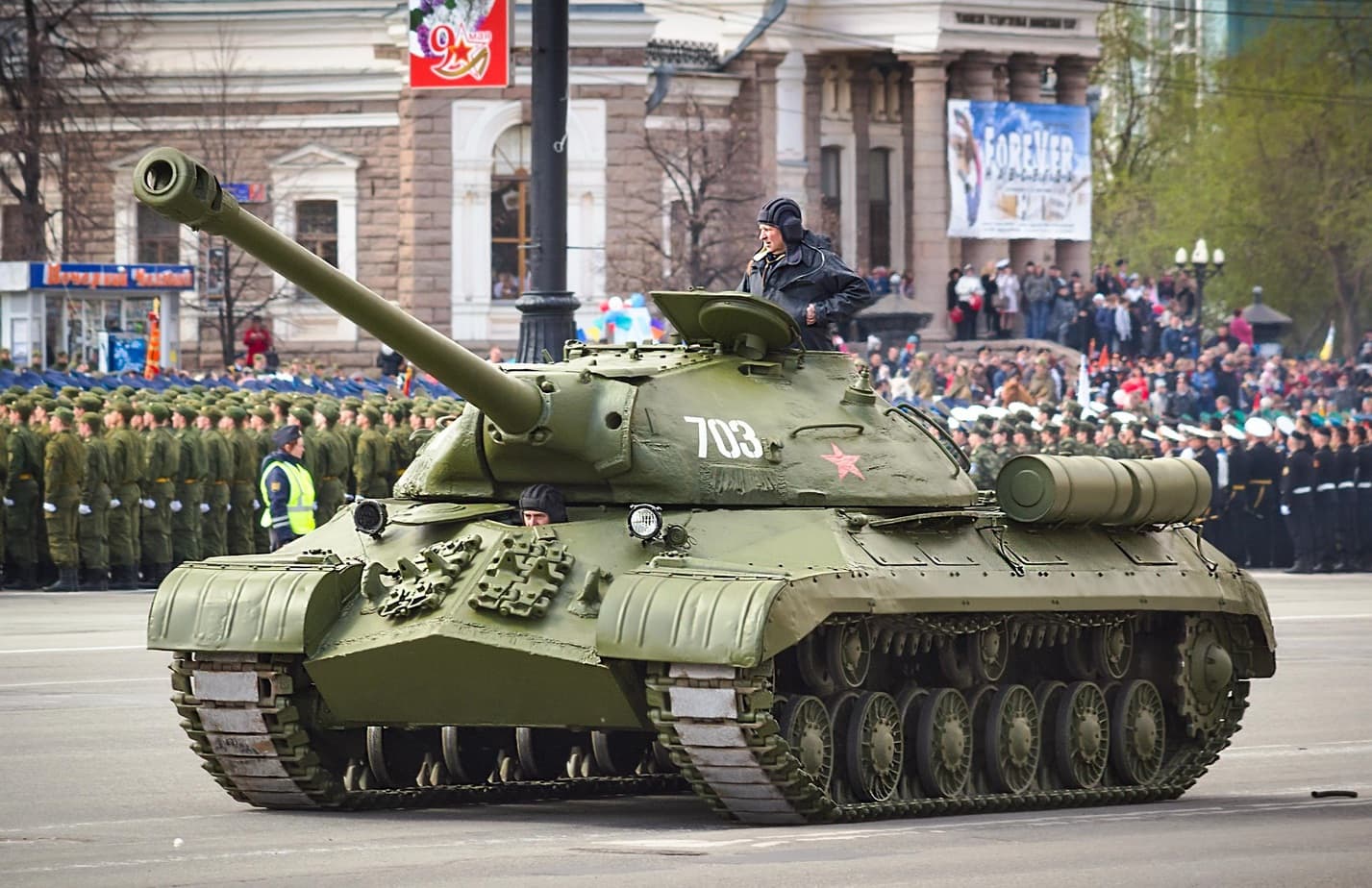 The IS-3 heavy tank was to be the Soviet Union’s ultimate heavy tank: well-armed and very well protected.

It could have in theory allowed the Red Army to punch through enemy armored formations and featured a number of design innovations that prompted American and British heavy tank designs in response.

The design was interesting, to say the least. One of the IS-3’s most distinctive features is its pointed front hull glacis, a weight-saving feature that allowed less armor plating to be used than a flat hull glacis while offering equivalent protection. Additionally, the IS-3 had a very squat, circular turret that gave the IS-3 tank a low profile. This design consideration presented the enemy with a smaller target to aim at, a crucial feature for a rather large, heavy tank design. This video gives a good impression of the tank’s size and is worth a watch.

One of the drawbacks with the tank’s rather low stance, however, is that the IS-3’s main gun could not depress downwards as greatly as other tanks, a disadvantage in a protected hull-down position behind the hillcrest. This risk was deemed acceptable, however, as the IS-3 would have been used mostly on flat terrain as an offensive weapon rather than in static defensive positions.

In addition to a formidable armor package, the IS-3 came equipped with one of the largest diameter main guns of the era, a huge 122mm field gun adapted for use in the IS-3’s cramped turret. Along with one medium machine gun and one heavy machine gun, the IS-3’s offensive capabilities were no joke.

Though the Soviet Union developed the IS-3 before the end of World War II, it entered service after the conclusion of hostilities in the spring of 1945 and did not see combat in that conflict. Despite arriving too late for service in World War II, however, the IS-3 saw combat elsewhere, as the Soviet Union exported the heavy tank to allied or client states particularly in the Middle East.

A number of modified IS-3s served with the Egyptian Army during the Six-Day War against Israel. Much to Israeli consternation, a number of IS-3s were able to withstand hits from 90mm armor-piercings shells from American-supplied M48 Patton tanks and bazooka anti-armor weapons.

One of the IS-3’s shortcomings was its diesel engine. With an output of around 600 horsepower, the V-12 was adequate for lighter tanks like the Soviet Union’s T-34, though the IS-3 weighed about 20 tons more and was therefore much slower and had less range than its medium tank brethren.

The IS-3 caused a bit of a scare when it made its debut with the Soviet Army during the 1945 Allied victory parade in Berlin, prompting a flurry of Allied heavy tank designs intended to challenge the IS-3 directly. Some of these, like the American M103 heavy tank, proved to be less useful than had been hoped and suffered from underpowered engines much like the IS-3 had.

Overall the IS-3 proved to be not quite as formidable as its Soviet designers had intended. Furthermore, the heavy tank design concept fell out of use in favor of universal, or main battle tanks that combined high speed and mobility with good armor protection and firepower.

If nothing else, the IS-3 was a formidable tank to behold, even if it didn’t dominate European battlefields as its designers intended.