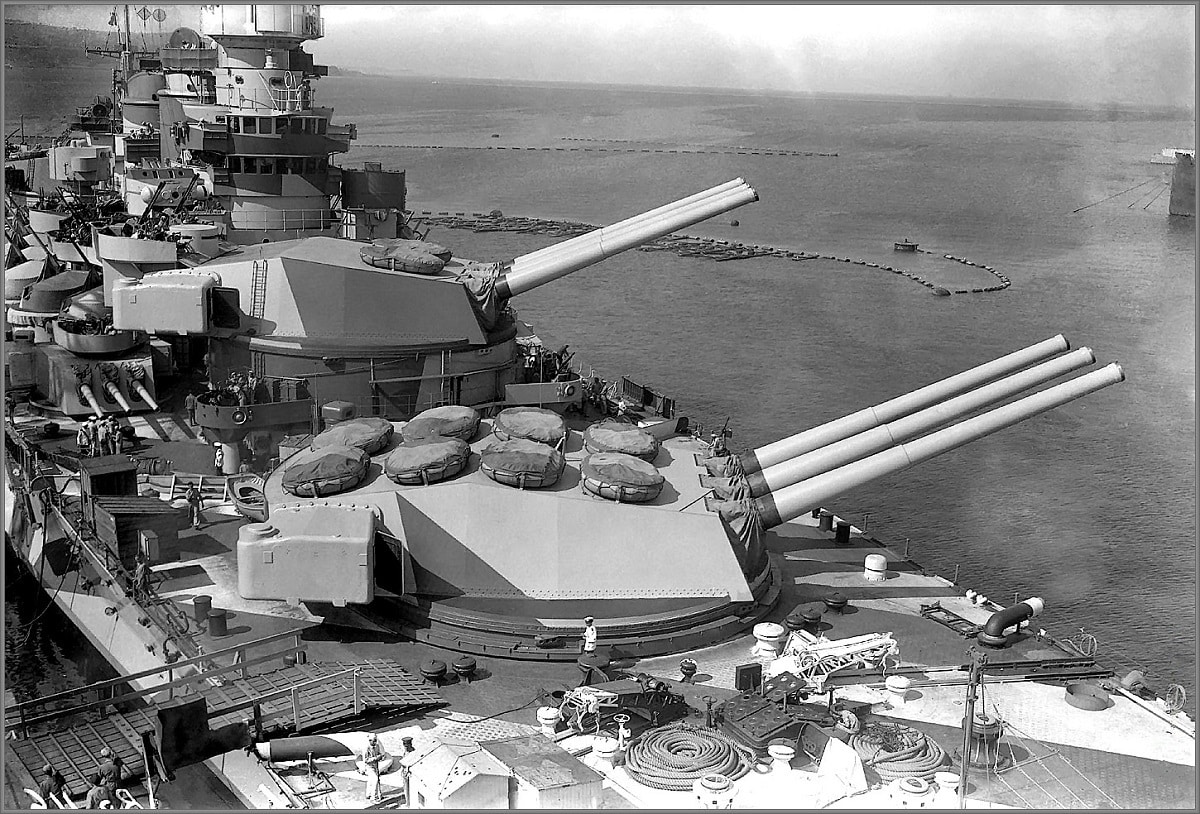 View of the bridge and forward turrets on the Italian battleship 'Roma'.

A day after the proclamation of the 1943 Italian armistice, which saw the downfall of the fascist regime under Benito Mussolini, on September 9, 1943, one of Italy’s largest and most modern battleships was sunk by its former Axis partners just a year after it entered service.

The Italian fleet, under the command of Admiral Carlo Bergamini on the battleship Roma, had been scheduled to sail towards Salerno to attack Allied ships during the invasion of Sicily. With the sudden surrender, the plans changed and Bergamini planned to sail to Sardinia, Italy’s King Victor Emmanuel III was setting up a “free government,” that was friendly to the Allies. After arriving in Sardinia, the Italian fleet then set sail for Malta.

It marked the first foray for the newly commissioned battleship since she joined the fleet just a year earlier.

Roma was the third Littorio-class battleship, and by all accounts, she was graceful in appearance – a testament to Italian designs – unlike the blocky designs of British or German battleships. She was well-armored, fast-moving, and quite capably armed. Built with a compartmented hull and an ingenious system of bulkheads and expansion cylinders the Roma was in theory as fortified as her namesake – where Rome’s mighty walls fended off attackers for centuries.

However, none of it was enough to save the stylish warship from a watery grave. Just as Rome’s walls eventually failed to stop the barbarians, the compartmented hull proved to be no match for German bombs.

When Italy withdrew from the Axis with Mussolini’s downfall, Nazi Germany didn’t want to risk that the mighty warship would be used by the Allies and sought to sink it. The effort wasn’t as vast an undertaking by the British to sink the German battleship, Bismarck. In fact, the Germans were able to quickly locate the Italian fleet.

As the Roma headed out to sea, the German Luftwaffe sent Dornier Do 2017s armed with Fritz Z radio-controlled bombs to destroy the majestic battleship. The squadron of bombers found its target in the Strait of Bonifacio between Italian-controlled Sardinia and French Corsica.

Scoring several direct hits, the bombers crippled the Italian battleship, which capsized and broke in two, sinking in just minutes. Of the nearly 1,900 sailors who served on Roma, along with 200 men from Bergamini’s staff, less than 600 survived. It was the greatest loss of life on an Italian warship during the Second World War.

The wreck of the vessel was found in June 2012, about 19 miles off the northern coast of Sardinia.

The Most Modern Italian Warship of World War II

Roma made just twenty sorties during her fifteen-month service life and none included combat operations.

She was roughly 787 feet long and had a beam of approximately 108 feet, while she displaced 45,772 long tons in a full load. Powered by eight Yarrow boilers with four shafts she could reach a maximum speed of 30 knots and had a range of 3,920 nautical miles.

Armament consisted of three sets of three 371mm (15-inch) main guns, as well as four sets of three 152mm (6-inch) guns, along with a dozen 90mm anti-aircraft guns. The capabilities of the Roma were never fully tested in combat operations, however.

The first two vessels of the class, Littorio, and Vittorio Veneto had formed the backbone of the Italian fleet. Along with Roma, all had been damaged in a series of Allied air attacks while in the harbor at La Spezia.

After the Armistice with the Allies, Littorio was renamed Italia and while damaged in route to Malta did make it to the Mediterranean island where she was interned along with Vittorio Veneto. A fourth Littorio-class battleship Impero was under construction. She was seized by the Germans and later sunk by American bombers.

Interned for the rest of the war, and sent to the Great Bitter Lake in the Suez Canal for the remainder of the war. Vittorio Veneto was allocated to the British, while the newly renamed Italia was awarded to the Americans. Both were scrapped in the years immediately following the war – an ungracious end to a gracious class of battleships.