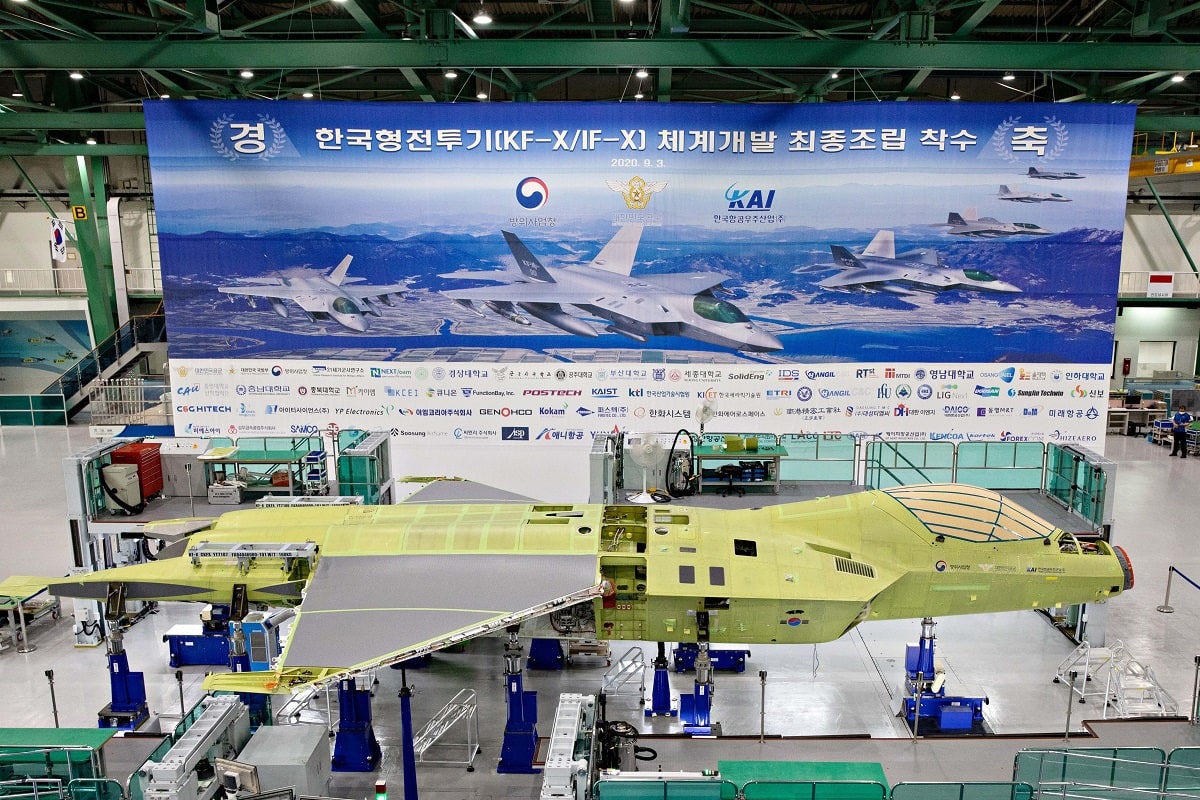 Seoul just showed off their home-grown stealth fighter to the world, in footage broadcast by MBC, a South Korean broadcaster.

The first jet airframe, known as the KF-21 Hawk, rolled off assembly lines in South Korea late last year and is expected to make its flight debut sometime in 2022.

Although the KF-21 is very likely not as stealthy as the United States’ F-22 or F-35 stealth fighters, the Hawk does have a number of stealthy characteristics that would allow the new fighter to bridge the gap between decidedly non-stealthy fighters such as the F-15s and F-16s and the F-35, all three of which are currently flown by the RoK Air Force.

The KF-21 appears outwardly similar to the F-35 in some respects, such as a canted twin-tail, apparently serpentine air intakes, and a prominent nose chine, all of which would scatter incoming enemy radar and prevent detection.

Unlike the F-22 and the F-35, the KF-21 does not carry its weapons internally, opting instead to carry them via underwing pylons and fuselage hardpoints. South Korea likely decided on this design feature over internally-held munitions in order to keep the KF-21’s price tag low, though the decision does adversely affect the jet’s radar signature.

Seoul is developing the KF-21 in tandem with Indonesia as a way to distribute program costs. In return for financing 20 percent of the stealth fighter project, Jakarta will take delivery of 50 KF-21 airframes, along with associated maintenance training and parts support. During the recent KF-21 rollout, both the South Korean and Indonesian flag were prominently displayed on the lower half of the stealth fighter’s nose.

Preliminary information provided by KAI, the jet’s manufacturer, states that the KF-21’s maximum speed would be Mach 1.82, with a 17,000-pound payload capacity represented by 10 hardpoints — though this information is preliminary and could change in the future.

KAI will initially manufacture the jet to the Block 1 standard, which would afford an air-to-air capability only, though subsequent Block 2 airframes will also be able to attack ground targets as well. Both single- and twin-seat variants are expected.

Though Seoul’s new airframes approach the level of capability that the F-35 offers, they admittedly do not offer the same amount of stealth as the American fighter does. Still, when compared to the array of 4th generation aircraft the KF-21 would operate in tandem with, the platform is indeed a step up.

In addition to their offensive capability, the KF-21s could operate in a ‘stealthed up’ configuration without weapons, and act as a more difficult to detect reconnaissance platform, potentially able to locate and relay targeting information to stealthier counterparts which would then take advantage of their superior stealth to eliminate targets on the ground and in the air.

Regardless of how exactly the KF-21 would be employed by the Republic of Korea Air Force, the stealthy jet’s recent rollout sends a strong message: as just the second Asian country to field an indigenously designed and built ‘stealthy’ fighter, they’re taking defense quite seriously.

Caleb Larson is a Defense Writer based in Europe. He holds a Master of Public Policy and covers U.S. and Russian security, European defense issues, and German politics and culture.s