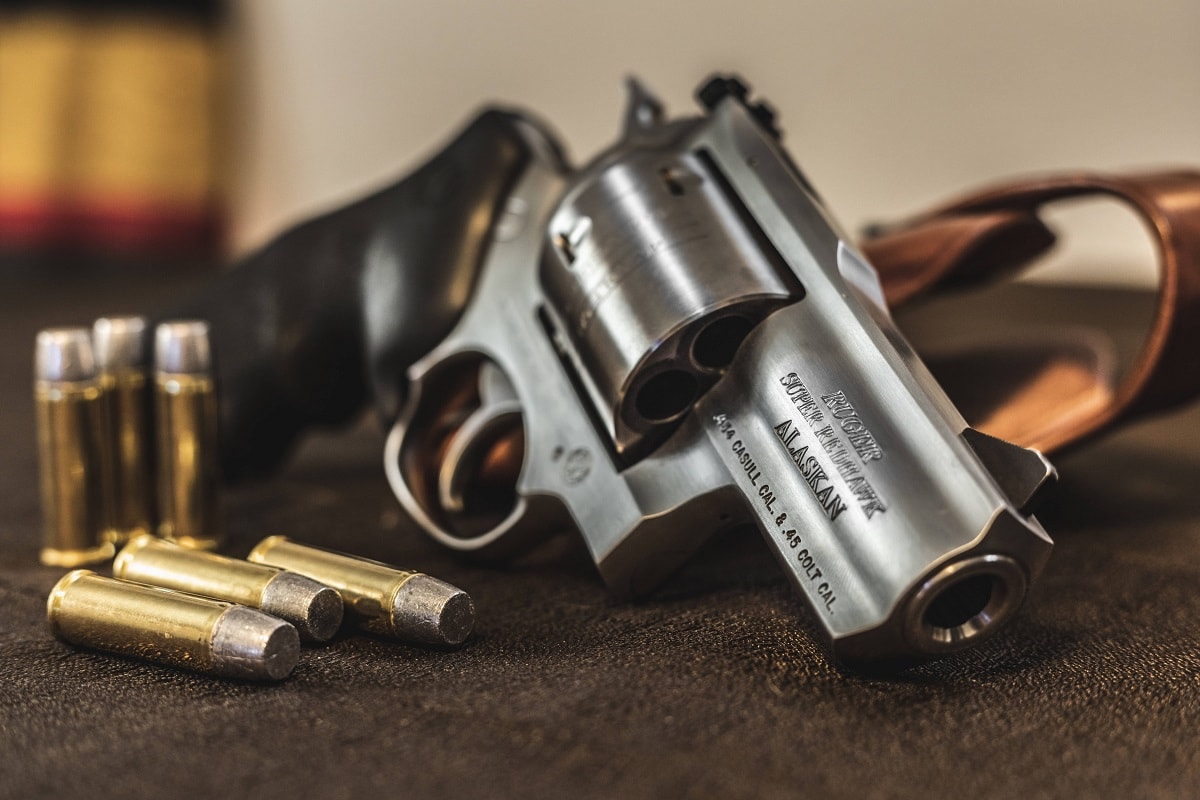 Ruger released their Super Redhawk Alaskan in the mid-2000s as a more compact alternative to the longer-barreled Super Redhawk.

Whereas the Super Redhawk is available in 5-, 7.5- and 9-inch barrel lengths, the Alaskan model comes with a stubby 2.5-inch barrel optimized for lightweight and quickdraws. These qualities make it a good choice for places like Alaska, where bears are a constant presence in everyday life.

In keeping with its role as a bear protection revolver, the Super Redhawk Alaskan is available in three powerful cartridges: the iconic .44 Remington Magnum, Ruger’s own .480 Ruger, as well as the very powerful .454 Casull.

Regardless of which cartridge the Alaskan is chambered in, each revolver comes with a 6-round cylinder, giving the shooter a great deal of firepower on a remarkably small, lightweight platform. In addition, the Alaskans come with a rubberized grip with finger grooves to afford the shooter a tight grip on to hold onto when firing the powerful revolver.

Ruger touts the pistol as the best in bear and other large game protection, and it is not an empty claim. Here’s why.

In 2009, salmon fishing guide and Alaska native Greg Brush took his dogs for a walk on a nearby dirt road, a Ruger chambered in the powerful .454 Casull strapped to his hip. Soldotna, Brush’s hometown on the Kenai Peninsula, has a constant bear presence, so even if just going for a walk with the dogs, it is a good idea to be prepared.

During his walk, he heard a twig crack. Though it wasn’t very loud, it prompted Brush to spin around. On the side of the road: a Brown bear, hackles raised and charging straight at him. The bear came “with zero warning,” Brush told a local newspaper. “No woof, no popping of the teeth, no standing up, nothing like what you think.”

In a split second, Brush drew his Ruger revolver and squeezed the trigger instinctively. Brush fired from the hip, and though the first shot missed, the next three or four shots found their mark, hitting the bear in its chest, shoulders, and belly.

Despite taking several hits from the immensely powerful .454 Casull, the bear didn’t immediately fall but tottered to the ground mere feet from where Brush had been standing. Still, Brush’s Ruger had done the job.

After the incident, examination of the bear’s carcass revealed it was severely underweight and probably starving, which may be why the bear charged, seeing Brush as an easy and badly-needed meal. “Had I not been able to kill him,” Brush said, “he’d have killed and likely eaten me.” Brush thanks his Ruger revolver for quite literally saving his life.