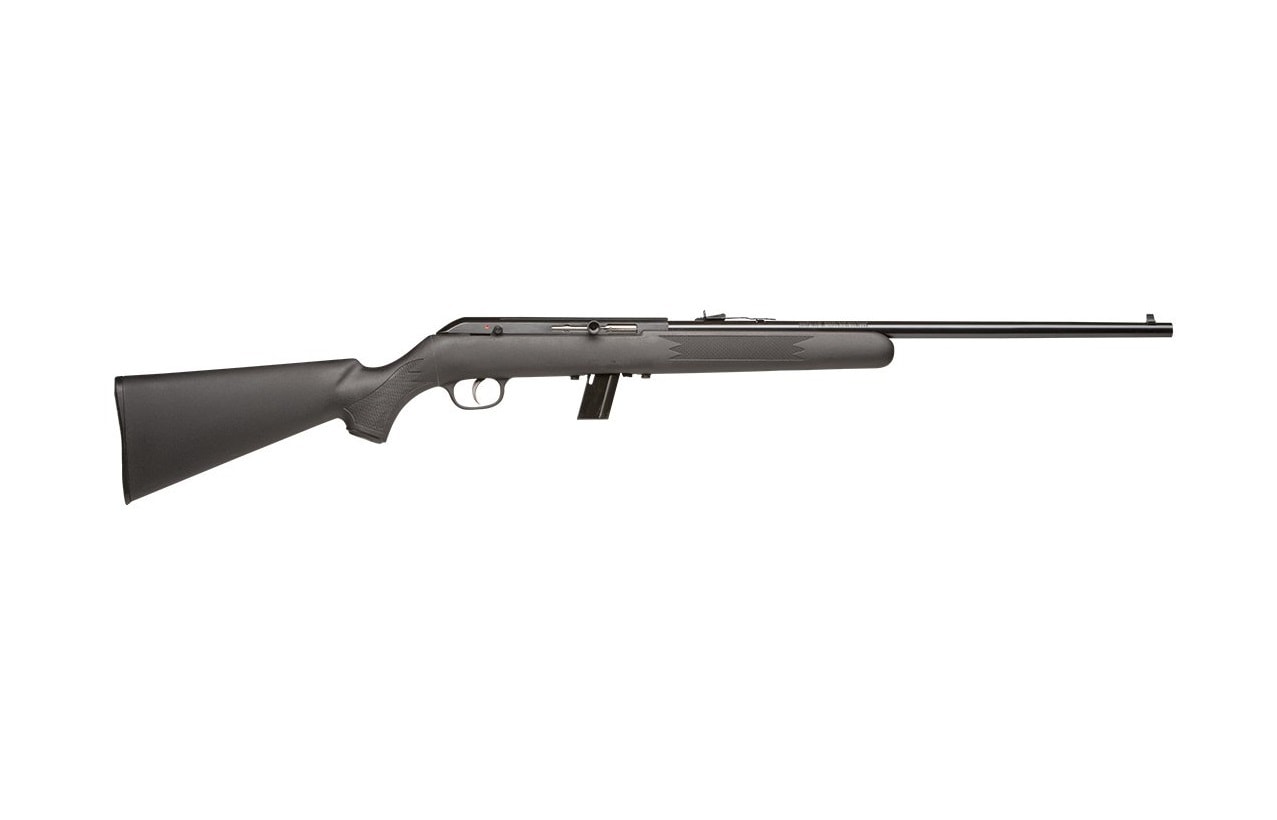 The Savage Model 64 is an inexpensive, reliable, and dead-on accurate semi-automatic rimfire rifle. The decades-old, straight-blowback action design is available in several different models, including the 64F, 64FXP, 64G, and 64FSS. Here, we’ll be focusing mainly on the 64F model.

Perhaps the Model 64’s best feature is its accuracy. It features a driftable front sight and a rear iron sight, both easily adjustable for windage and elevation. Using the standard sights, I was able to get consistent 1” groups from 25 yards and 2.5” groups from 50 yards! If you’d like to replace the standard sights to improve your accuracy even further, the free-floated barrel is drilled and tapped for easy mounting.

One unique feature of the 64F is that it has no bolt release. Instead, a bolt handle lock holds the bolt in place at the rear of the gun and can be unlocked to release the bolt. It’s lightweight and comfortable, which aids in offhand shooting accuracy. The charging handle is also very simple to operate. All you have to do is pull back the handle on the right side and press in.

It features a full, comfortable grip and a polymer matte black stock. The steel receiver is dovetailed for rimfire scope mounts (like one of the best carbine red dots), but some people find the length between the trigger and breech (6 ⅛”) uncomfortable and longer than needed. Still, it’s comfortable to handle and incredibly reliable for such an inexpensive rifle. Just don’t use any tough-to-handle rounds, like black powder, and you shouldn’t experience any squib loads!

As far as other measurements go, the Model 64 is a pretty long gun. The 21” barrel accounts for over half of its 40” overall length, but shockingly, it’s still very light at just 5 lbs. Although it’s light, it still feels quite solid and recoil isn’t excessive.

In the box, you’ll find one 10-round capacity, metal, detachable box magazine. It’s pretty surprising that Savage included a metal mag with such an inexpensive rifle, but they don’t come without the potential for problems. While I haven’t had any issues myself, some users have had issues with their mags not feeding properly. However, it’s an inexpensive fix, because you can get a replacement for just about $12 online.

There are also a couple of strange control placements on the Model 64. The magazine catch, for example, is in front of the magazine. This means you’ll have to use your index finger to insert the magazine from a standard grip, which is a bit cumbersome but doesn’t impede use. The push-forward lever safety is also weirdly placed on the right-hand side of the receiver. This requires you to either break your grip and use your thumb to turn it off, or attempt to use your index finger.

Although Savage is known for their top-tier triggers, the Model 64’s trigger does have a fair amount of take-up before it breaks. However, with an MSRP of just $149, you can’t really be disappointed with a less-than-perfect trigger on an otherwise excellent rifle.

There’s not much aftermarket support and it’s nowhere near as customizable as an AR-15, but the Savage Model 64 is affordable, reliable, and accurate. It’s often a go-to for a young shooter’s first rifle and is excellent for small game hunting and plinking alike. If you need something inexpensive yet sturdy, go with the Model 64.