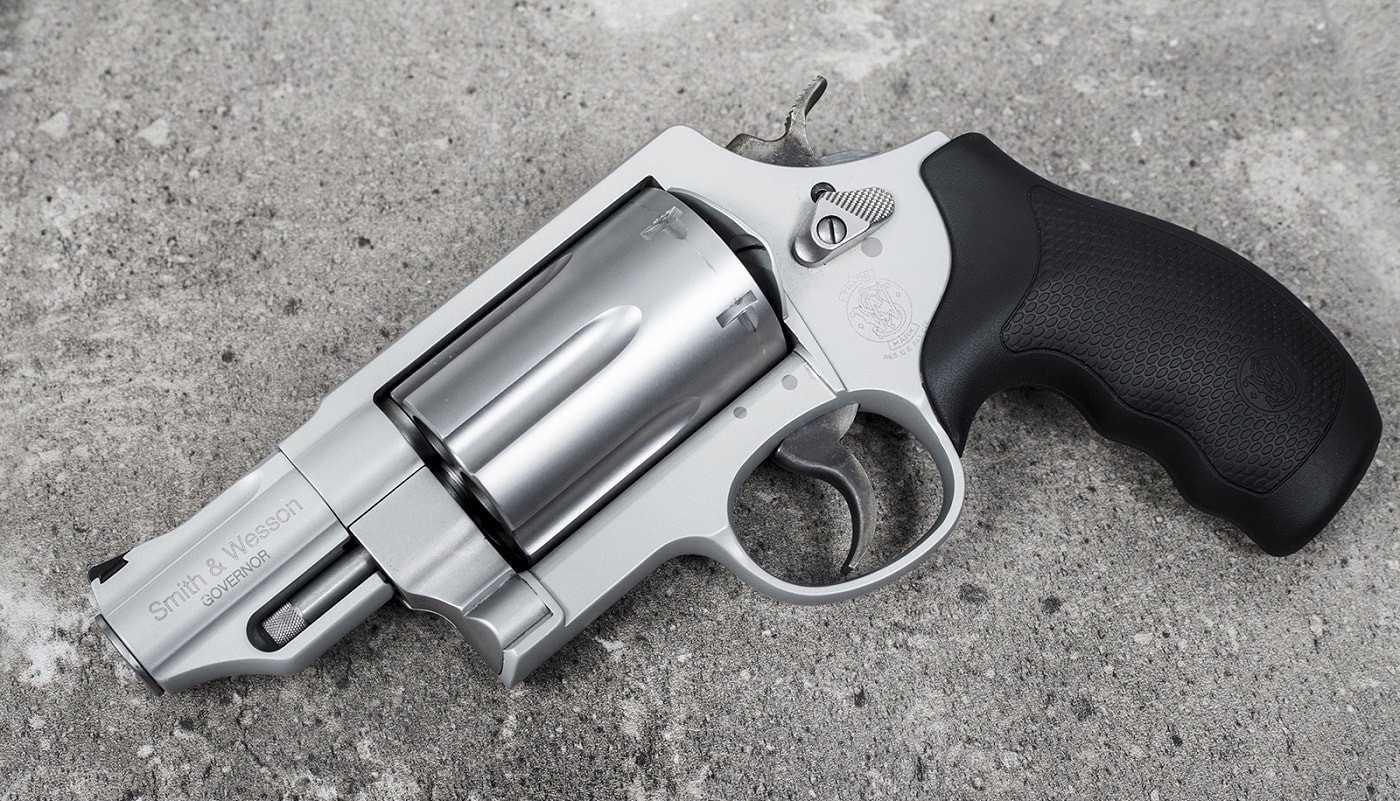 Smith & Wesson is one of the oldest, most prolific gun manufacturers in the United States. Since 1852, the Springfield, Massachusetts-based company has been building the best of the best in revolvers — nearly 170 years! And their Governor revolver is no exception to Smith & Wesson quality and reliability.

At first glance, the Governor is a rather conventional-looking revolver: short, snub-nosed barrel, satin or matte finish, rubberized grip.

One thing that sticks out — its cylinder. It is much longer than that of a typical revolver. Why? Because it can fire .410 shotshells, that’s why.

Yes, the Governor can fire 2.5-inch .410 bore shotshells, one of the smallest easily available shotshells. Though they’re nowhere near as powerful as larger shotshells like the 20- or 12-gauge shotshells, the smaller .410 would still pack a wallop at close range.

In addition to the .410 shotshell, the revolver can also chamber and fire the .45 Colt or .45 ACP with the use of moon clips. This ammunition combination makes the Governor a very versatile revolver.

Thanks to the Governor’s rifled barrel, it can shoot .410 shotshells in a very wide pattern than a typical smoothbore shotgun would be able to. Though certainly not a valuable characteristic for hunting, and no boon for accuracy, it could be especially destructive in a close, confined shooting situation.

The Governor is based on Smith & Wesson’s Z-Frame, a purpose-built frame that accommodates the revolver’s large cylinder and comes in two variants: a dark, matte black or matte silver finish. Both models come with a 2.75-inch barrel. The Governor can fire in both single- and double-action and therefore features an exposed hammer. Both come with synthetic rubber grips as well.

Despite the Governor’s large size, the revolver is lighter than would be expected and tips the scales at under 30 ounces. This is thanks in part to the frame, which is a type of Scandium alloy, offering significant weight savings at no cost to strength or robustness.

As far as Smith & Wesson revolvers go, the Governor is relatively affordable. The two models are priced by Smith & Wesson at $825 and $885. Despite the reasonable price point however, they’re still backed by the company’s lifetime warranty.

Smith & Wesson’s revolver designs have stood the test of time because they’ve thought through every aspect of their design, making them some of the best in the business. For those looking for a very versatile and unique revolver, the Governor is a solid choice.