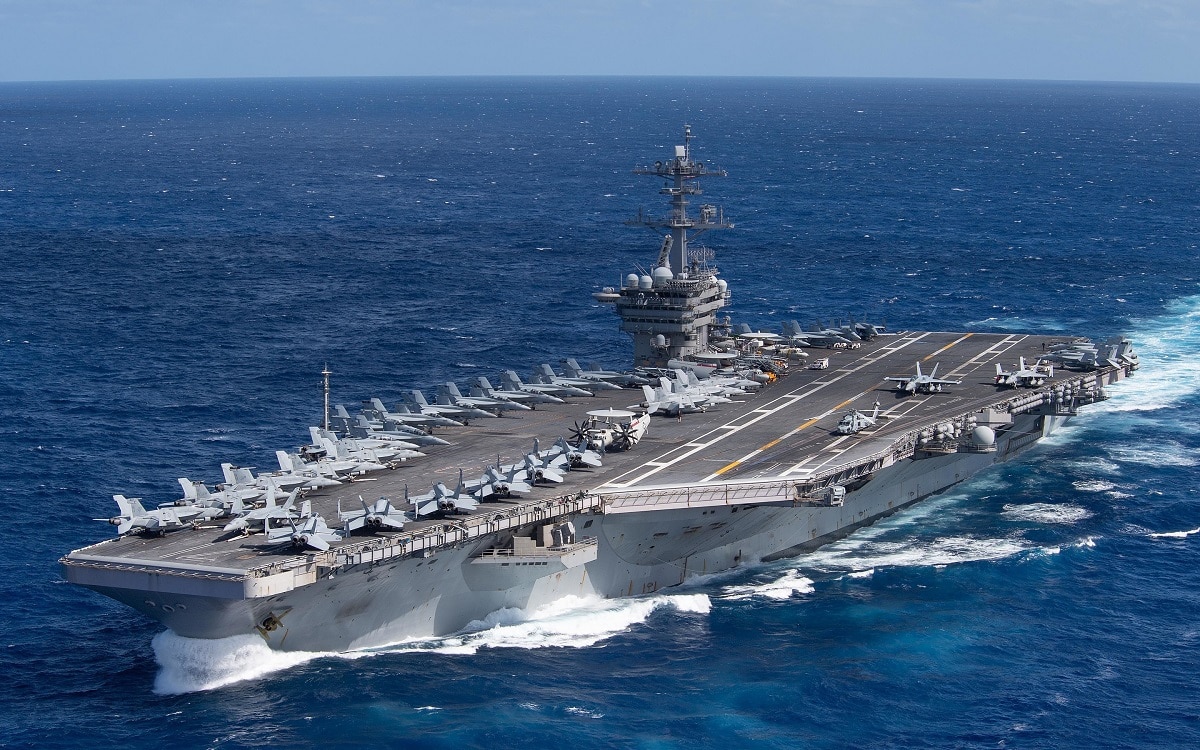 President Theodore Roosevelt’s foreign policy was based around the policy to “speak softly and carry a big stick,” but exactly how “softly” the Theodore Roosevelt Carrier Strike Group (TRCSG) might be as it returns to the South China Sea is certainly a matter of debate.

Whether the actions do in fact speak softly, the strike group was meant to be seen as a “big stick” by Beijing.

TRCSG entered the South China Sea on April 4 to conduct routine operations the U.S. Navy announced. This is the second time this year that the strike group, which consists of flagship carrier USS Theodore Roosevelt (CVN-71), Carrier Air Wing 11, the Ticonderoga-class guided-missile cruiser USS Bunker Hill, Destroyer Squadron 23, and the Arleigh Burke-class guided-missile destroyer USS Russell, have been deployed to the region.

CVN-71 had departed San Diego for its scheduled deployment to the Indo-Pacific region on December 23, 2020. In March the carrier strike group conducted a training operation with the Indian Navy in the Indian Ocean.

The South China Sea is within the United States’ 7th Fleet’s area of operations. It is the largest U.S. Navy forward-deployed fleet and employs fifty to seventy ships and submarines across the Western Pacific and Indian Oceans.

“It is great to be back in the South China Sea to reassure our allies and partners that we remain committed to freedom of the seas,” said Rear Adm. Doug Verissimo, commander, Carrier Strike Group Nine, via a statement.

“Over the course of the strike group’s deployment, we have demonstrated our commitment to the rules-based order in the Indo-Pacific region by operating with our friends from Australia, India, Japan, Malaysia and South Korea,” Adm. Verissimo added. “We look forward to continuing to sail together with all those that embrace our collective vision of security and stability in one of the most important regions in the world.”

“I could not be more proud of the hard work and professionalism that this crew has shown every day during this deployment,” said Capt. Eric Anduze, USS Theodore Roosevelt’s commanding officer. “Our Sailors’ tenacity and warfighting prowess is unmatched and is a testament to our Navy’s resolve to maintain free and prosperous seas.”

The deployment of CVN-71 comes a year after the carrier was sidelined by an outbreak of the novel coronavirus, which resulted in the warship having to undergo a complete cleaning in Guam while the crew recovered.

In the past year, the United States Navy has also regularly sent carriers and other warships to the region, which includes waters that are contested by several nations including China, the Philippines, Indonesia, and Vietnam. The area is believed to be rich in natural resources including pockets of oil and natural gas, while near-shore placer minerals include titaniferous magnetite, zircon, monazite, tin, gold, and chromite.