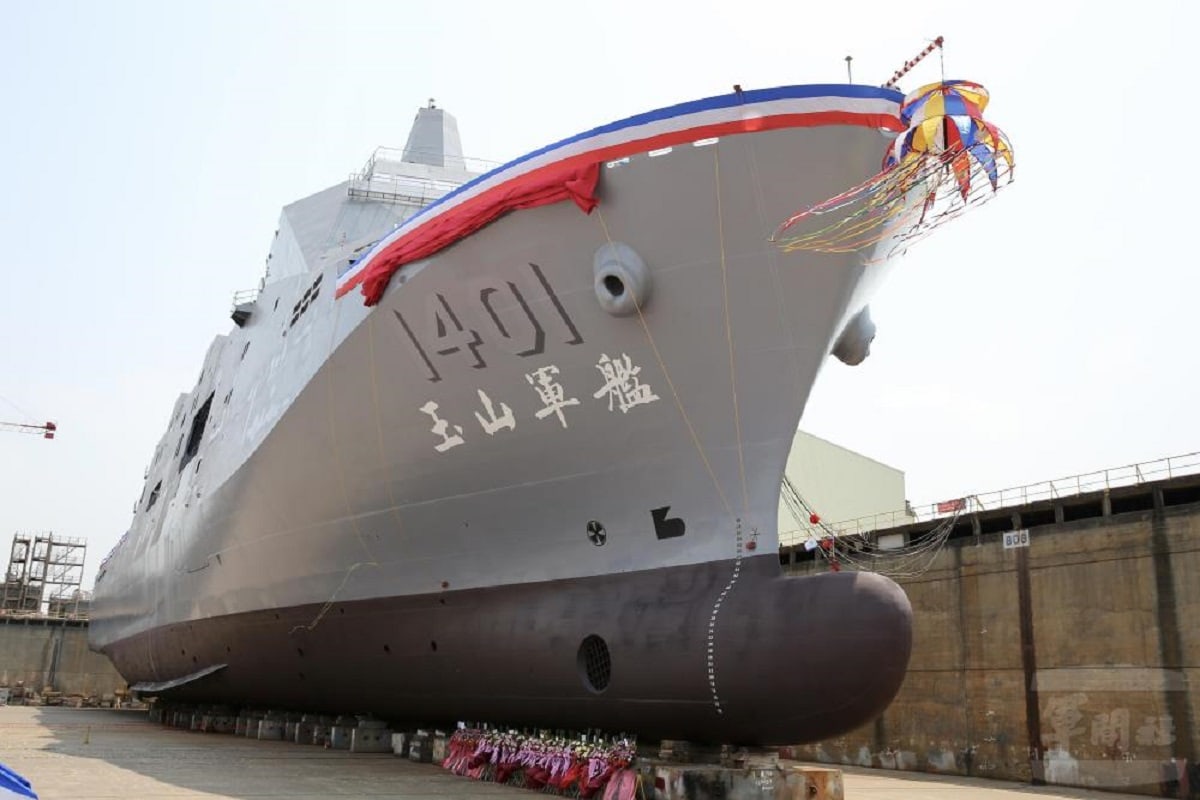 Taiwan launched the first of a new class of amphibious warfare ships with a number of capabilities that would help the island nation defend itself and its numerous islands from a Chinese invasion.

The ship, christened the Yu-Shan after Taiwan’s tallest mountain, will replace the Hsu Hai, an older, formerly U.S. Navy landing ship that had been in virtually continuous service for over half a century.

The Yu-Shan is Taiwan’s first indigenously built amphibious transport ship and is outfitted with several weapons that would help even Taiwan’s long odds against China.

Although the ship could conduct amphibious-type operations and cargo transportation missions as well as humanitarian and disaster relief missions, it is also equipped with several sharp-edged weapons.

The ship carries an MK-75 76mm gun, a relatively lightweight gun that does not require much manpower to operate. It also sports a pair of MK-15 Phalanx close-in weapons systems for missile defense, as well as a pair of missile launchers that could afford the ship a potent anti-ship offensive capability.

Though speculative, the ship’s launchers could potentially house Taiwan’s powerful Hsiung Feng II, an indigenously-designed anti-ship missile that you can read more about in this previous National Interest piece. The missile is a supersonic, solid-fuel boosted missile that has a range estimated at about 375 miles and can attack targets on land.

Alternatively, Taiwan possesses a number of indigenously designed surface-to-air missile weapons that could be used to great effect on an amphibious transport ship.

“The launch of the navy’s first 10,000-tonne LPD, built-in line with our defense needs, represents another milestone for our indigenous shipbuilding programme,” Taiwan’s President Tsai Ing-wen reportedly said at the ceremony held in a shipyard Taiwanese shipyard.

In addition to the aforementioned weapons, the Yu-Shen can also transport up to 673 fully-equipped troops and AAV tracked amphibious vehicles, the same that is currently being phased out by the United States Marine Corps.

The new ship’s top speed is thought to be 21 knots and would have a range of approximately 7,000 kilometers, or nearly 4,400 miles. In addition to the ship’s cargo capacity, there is also hangar space for two helicopters as well as a single flight deck to facilitate helicopter operations.

Though the Yu-Shen itself would not tip the balance of power from China to Taiwan, it’s an important defense step for the island nation to take, especially considering China’s increasing naval might.

Indeed, if American naval reports are to be believed, a Chinese invasion within the next six years wouldn’t be completely unlikely, making the Yu-Shen’s rollout particularly important.