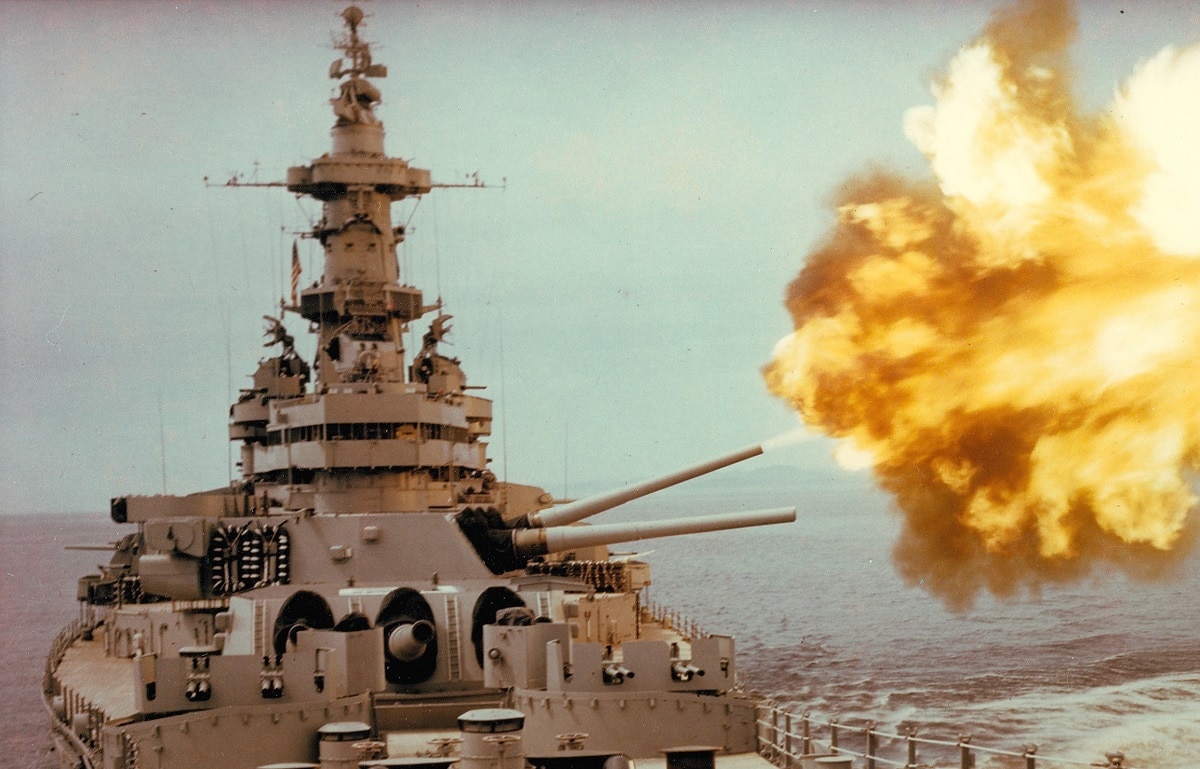 She was the lead ship of her class, the fourth U.S. Navy vessel to be named after the state of Iowa.

Today, the massive USS Iowa (BB-61) calls the Port of Los Angeles home, where she is a museum ship and serves as a testament to the might of the United States Navy from World War II to the end of the Cold War.

The largest and most powerful battleships built for the U.S. Navy, the Iowa-class were also the final battleships that entered service with the Navy.

Unlike slower battleships of the era, this class was also designed to travel with a carrier force, and even be able to transit the Panama Canal, enabling the mighty warships to respond to threats around the world.

Planning for the new class began even before the Japanese attack on Pearl Harbor. Seeing war clouds on the horizon, the U.S. Navy called for a “fast battleship” that could take on the increasing power projected by the Imperial Japanese Navy.

Laid down on June 6, 1940, she was completed on February 22, 1943, and just two days later was put to sea for a shakedown in the Chesapeake Bay and then along the Atlantic coast. By the summer of that year, she had been deployed to patrol the waters off the coast of Newfoundland after it was reported that the German battleship Tirpitz was operating in Norwegian waters.

In November 1943, USS Iowa carried President Franklin D. Roosevelt, along with Secretary of State Cordell Hull, Chief of Staff Admiral William D. Leahy, Chief of Staff of the Army General George C. Marshall, Chief of Naval Operations Ernest King, Commanding General of the U.S. Army Air Forces Henry “Hap” Arnold, Harry Hopkins, and other military leaders to Mers El Kébir, Algeria. It was the first leg of the journey for the leaders heading to the Tehran Conference, and the warship then conducted a similar presidential escort on the return journey in December.

Notably, the battleship was outfitted with a bathtub specifically for President Roosevelt, who was unable to use the warship’s shower facilities.

She spent the rest of the Second World War in the Pacific, where USS Iowa took part in the Marshal and Mariana Islands Campaigns, the Okinawa Campaign and in the summer of 1945 even took part in strikes on the Japanese home islands. Iowa joined her sister ship, USS Missouri (BB-63) during the September 2 surrender ceremony in Tokyo Bay, and BB-61 then remained in the bay as part of the occupying force.

Decommissioned in 1949, she returned to service just two years later and took part in the Korean War, serving as the flagship of the Seventh Fleet from April to October 1952. Iowa took part in the shelling of enemy positions on multiple occasions, including sorties north of the 38th parallel. Those actions established her eligibility for the United Nations Service Medal and the Korean Service Medal with one bronze star.

She was decommissioned a second time in 1958.

Armed with a main battery of 16-inch guns that could hit targets nearly twenty-four miles away with a variety of artillery shells, the Iowa-class were among the most heavily armed U.S. military ships ever put to see.

In the 1980s, when President Ronald Reagan called for a 600-ship U.S. Navy, Iowa and her three battleships were reactivated and upgraded with new combat systems that replaced the many of the ships’ smaller five-inch guns with a launcher for Harpoon anti-ship missiles, 32 Tomahawk cruise missiles and four Phalanx close-in weapon systems (CIWS). Initially equipped with 40mm anti-aircraft guns, during the Cold War those were replaced with missiles, electronic-warfare suites, and Phalanx anti-missile Gatling gun systems.

The warship was also used as the testbed for the Navy’s RQ-2 Pioneer Unmanned Aerial Vehicle (UAV) in the 1980s, the first of its kind to use a drone as an aerial spotter for a battleship’s guns.

While Iowa didn’t take part in combat operations following her reactivation, On April 19, 1989, a fire in her second sixteen-inch gun turret killed 47 crewmen. She was decommissioned a final time in October 1990, and since 2012 she has been preserved as a museum ship.

The Port of Los Angeles waterfront in San Pedro is home to the Pacific Battleship Center (PBC) and Battleship Iowa (BB 61) Museum.