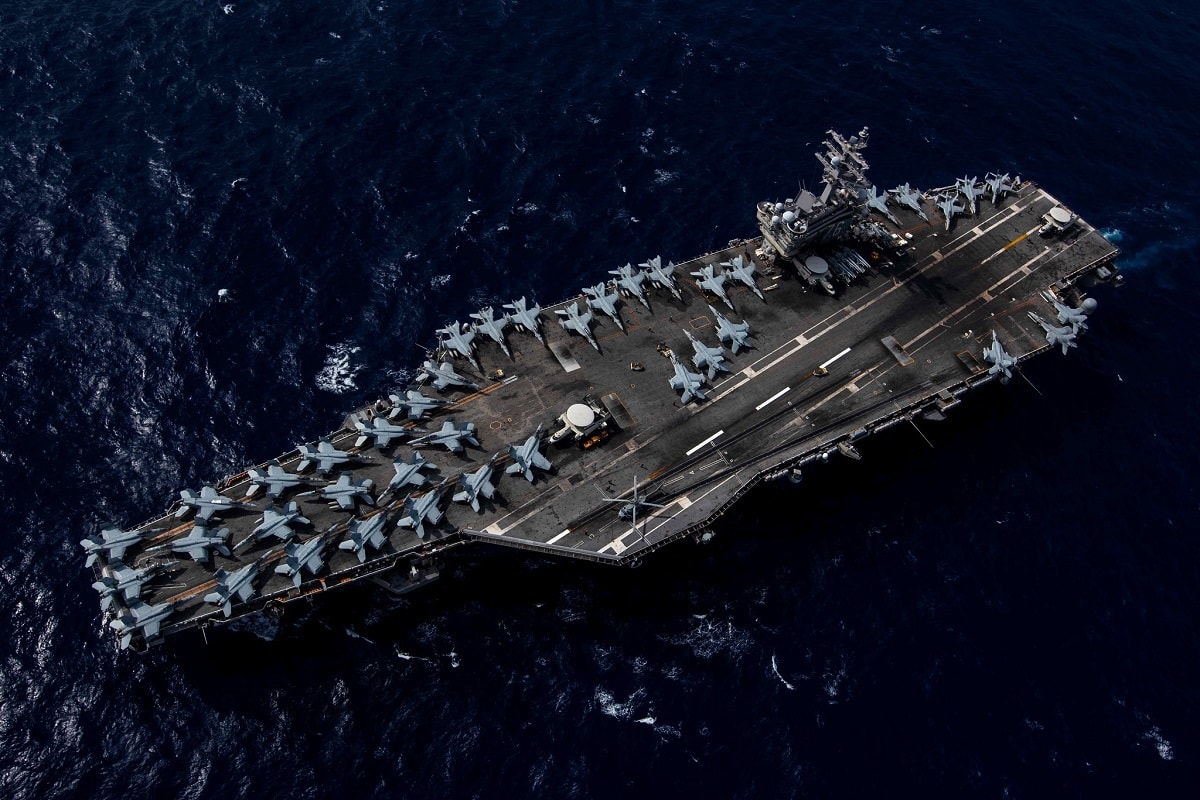 Since October 2015, USS Ronald Reagan (CVN-76) has been the flagship of Carrier Strike Group Five (CSG-5), the only forward-based and carrier strike group home-ported at Yokosuka, Japan. This would be the tip of the U.S. military’s spear in any conflict with China or North Korea.

Permanently forward-deployed to the U.S. 7th Fleet, CSG-5 is also the United States Navy’s largest carrier strike group. The ninth ship of the nuclear-powered Nimitz-class, she is named in honor of Ronald W. Reagan, the fortieth president of the United States, who served from 1981-1989. She was laid down in early 1998, launched in March 2001, and commissioned in July 2003.

She was the first carrier to be named in honor of a then-living former President. While Reagan was not associated with the navy, one of his key initiatives while in office was the six-hundred-ship Navy program.

The carrier’s motto, “Peace Through Strength” highlights President Reagan’s recurring theme during his public service. He used the line during a speech to the nation on September 24, 1988 when he said, “One thing is certain. If we’re to continue to advance world peace and human freedom, America must remain strong. If we have learned anything these last eight years, it’s that peace through strength works.”

Under the command of then Capt. Terry B. Kraft, she departed San Diego in early January 2006 on her maiden deployment to conduct naval operations in support of Operation Iraqi Freedom and Operation Enduring Freedom, along with further maritime security operations in the Persian Gulf. It was a tenuous beginning as an F/18 Hornet crashed into the flight deck that same month. Additionally, while in the port of Brisbane, Australia, the carrier – nicknamed Gipper – was delayed after the main condensers in the propulsion became clogged with 1,900 pounds (860 kg) of jellyfish, causing problems to the main MMRs and hindering cooling to the main reactors.

When USS Ronald Reagan’s official home port was changed from Bremerton, Washington to San Diego in 2013, the Navy allowed sailors to be relocated to have their personal vehicles transported on the deck of the ship as a cost-saving measure.

Two years later, when Ronald Reagan replaced USS George Washington (CVN-73), many of the crews from the two Nimitz-class carriers were allowed to switch ships. That was done to minimize the number of sailors who would need to move between San Diego to Japan due to the change in the homeports of the two carriers.

Since being reassigned to Japan, CVN-76 has conducted numerous fleet exercises with the Japanese Maritime Self-Defense Force as well as with the Republic of Korea Navy. In July 2020, the Ronald Reagan Carrier Strike Group was deployed to the South China Sea along with USS Nimitz (CVN-68) for dual-carrier operations in the Philippine Sea.

Following the competition of the SRA, the Gipper will be ready for its next deployment.