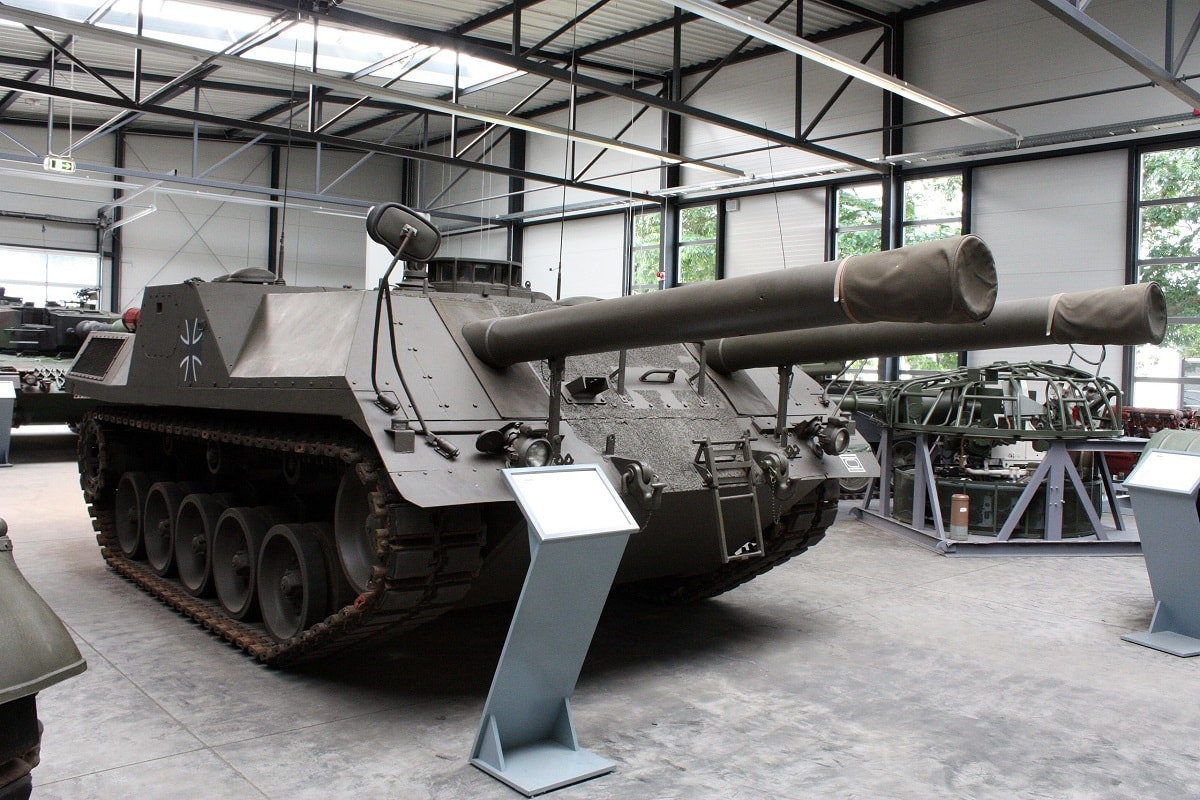 The Cold War was an interesting time in the world of tank design.

Both the Soviet Union as well as a number of NATO countries designed quite a few strange, ineffective, or otherwise other-worldly kinds of tanks — and West Germany was no exception.

Building on the success of their World War II tank designs and the very successful post-war Leopard I tank, several West German defense companies built a series of experimental tanks intended to succeed the Leopard. One of these, the Versuchsträger 1-1 and 1-2 was one of the strangest looking experimental tanks of the Cold War.

The Versuchsträger (German for Test Vehicle) initially began as a joint West German-United Kingdom development project, though the Brits quickly withdrew from the project over disagreements on the prototype’s turretless design.

The tank’s lack of turret was a strategic decision: like the Wehrmacht’s powerful Jagdpanzers of Second World War infamy, and the subsequent West German Kanonenjagdpanzer, the Versuchsträger would forgo a turret for several reasons. First, eliminating the large turret cut a significant amount of weight off the platform, affording it a higher degree of mobility than would otherwise be possible. Secondly, the design reduced the tank’s silhouette and therefore offered enemy tanks a smaller, harder-to-hit target. The weight savings of the turretless design could be redistributed to the tank’s hull, giving it greater armor protection than what a turreted tank could carry.

In some respects, the West German design was not entirely unlike Sweden’s Cold War-era Stridsvagn 103, an incredibly compact and nimble turretless main battle tank. Through the use of an innovative hydropneumatic suspension, the Swedish tank was able to solve aiming problems inherent to a turretless design — though the Versuchsträger would opt for a very different aiming method.

Why It Was Unique

The experimental tank sported a powerful turbocharged engine with an output of approximately 1,500 horsepower. This affords the design a very good weight to power ratio, which could be increased during short periods of even higher 2,400 horsepower bursts. It was thought that the tank would advance very quickly through the battlespace using a zig-zag movement pattern to both evade enemy fire, as well as to aid aiming.

The tank would have utilized a fire control system that for the time, was quite advanced. While zigzagging around the battlefield and avoiding or withstanding hits from enemy fire, the tank’s gunner would fire the two main guns at the time indicated by the onboard the computer when the tank was initiating turns. Thanks to having two on-target shots, the Versuchsträger could have been in theory an incredibly accurate and devastating platform.

Ultimately the Versuchsträger project was abandoned, as evaluations revealed that the design did not hold significant advantages over the Leopard II turreted design.

Though unsuccessful, the Versuchsträger was nevertheless a remarkable piece of experimental Cold War tank design.