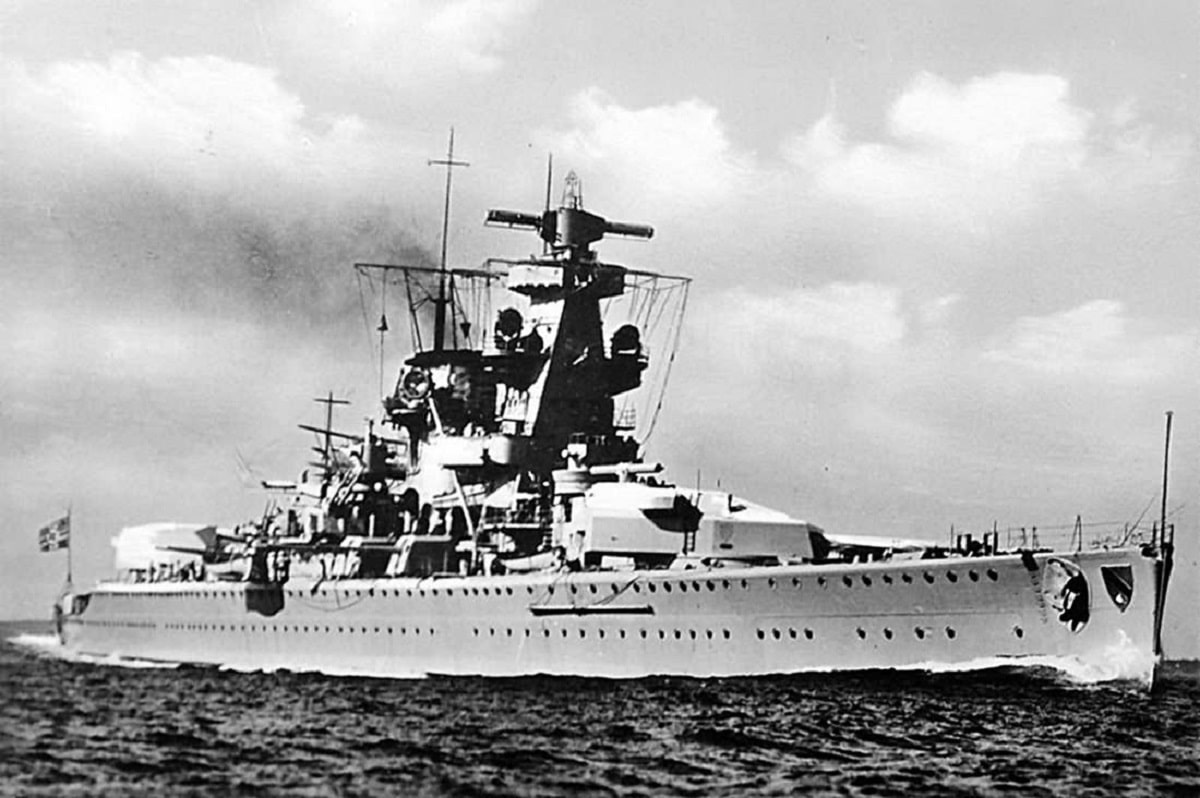 Many World War II warships now rest at the bottom of sea – a watery grave for those brave sailors who sadly often went down with the ship in battle. While researchers have been able to find some of the most famous wrecks, there are still dozens of warships whose exact location isn’t known.

Such is not the case for the German pocket battleship Admiral Scheer, whose location is well known in part because she was actually buried after the war.

Unable to complete a refit, the ship remained in port in the closing months of World War II, and on April 9, 1945 she was targeted by the Royal Air Force during a raid on the port city of Kiel. Struck numerous times by Tallboy bombs, the warship – the second of three Deutschland-class heavy cruisers (also known as pocket battleships) – capsized in port. The number of casualties from the attack is unknown but it is likely many of the sailors were able to get to shore.

The vessel remained in place after the war and while there were efforts to salvage the wreck, Admiral Scheer was simply left in place. Much of the inner harbor was filled in with material from the bombed-out ruins of the city and as a result instead of being sunk or scrapped – the two most common fates of modern warships – she was buried beneath rubble and debris and remains in place today beneath the Ellerbrek district of Kiel.

The German pocket battleship Admiral Scheer isn’t unique in being buried, and it was common in the Middle Ages for Viking leaders to be buried with their ships. It was just last year that the so-called Gjellestad ship was excavated in southeastern Norway.

In more recent times, old vessels were used to extend the shoreline. Port cities around the world from London to New York City have seen many of those old vessels recovered in recent years, including an 18th century sailing ship that was used as landfill in Lower Manhattan near the World Trade Center site. The practice was so common that finding a buried ship along some shorelines is almost expected.

This is certainly the case in San Francisco, where there are now ongoing projects to unearth those old vessels. During the California gold rush of the 1840s and 1850s, as many as forty old ships were buried in the city’s Embarcadero and Financial District along what was the city’s original shoreline.

Extending the port in Kiel wasn’t the goal, but in the case of the Admiral Scheer the vessel was so large, while post-war Germany lacked the industry to deal with her, that she was simply left in place.

Admiral Scheer isn’t the only World War II warship that was left where she sank only to cause later problems. Her sister vessel and the third of the Deutschland-class heavy cruisers, Graf Spee, was also buried but not in dirt but rather mud after she had been scuttled by her crew in the early months of the war at the port of Montevideo, Uruguay.

The wreck sank into just eight meters under the surface and when the efforts to raise her failed, she was partially broken up in situ. Afterwards, two remaining sections became engulfed in mud. A salvage team began raising the wreck in an operation in 2004 that was partially funded by the Uruguayan government as the old warship had become a hazard to navigation.