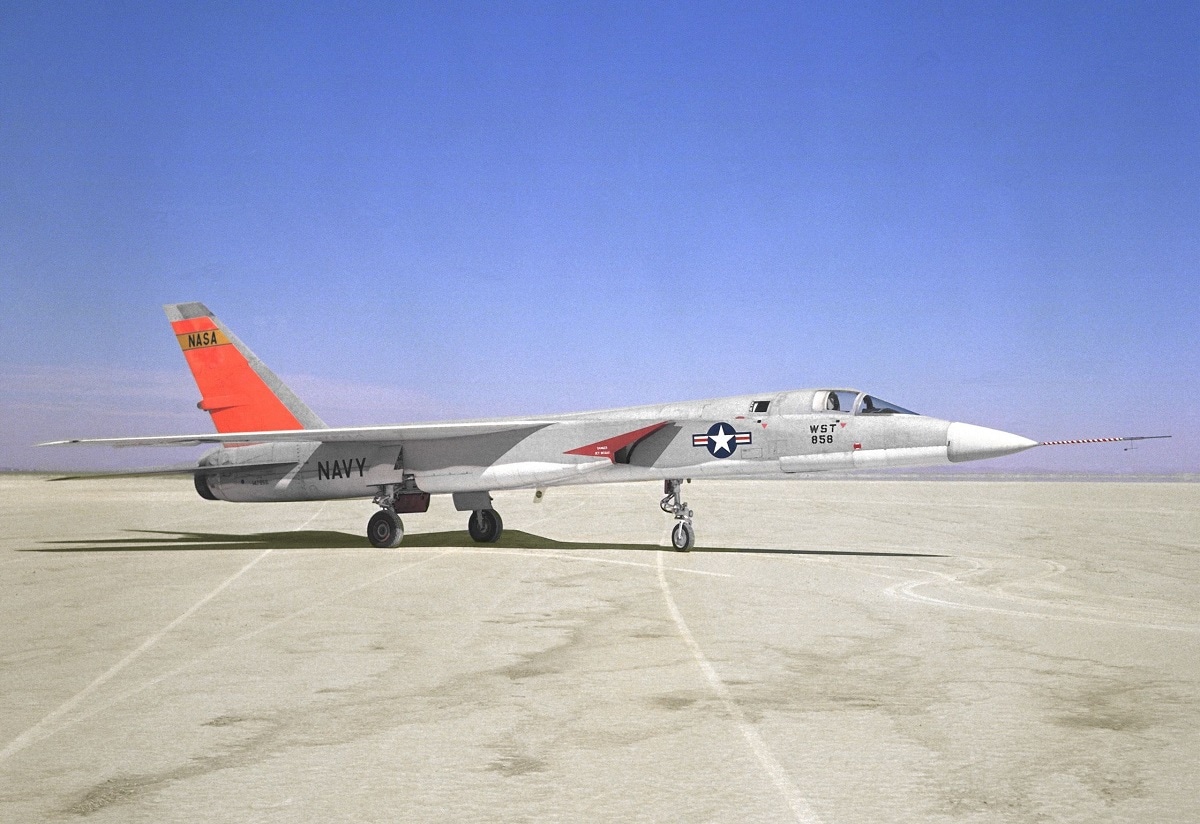 A North American Aviation A3J-1 Vigilante (Navy serial number 147858/NASA tail number 858) arrived from the Naval Air Test Center, Patuxent River (Maryland, USA), on 19 December 1962 at the NASA Flight Research Center (now Armstrong Flight Research Center, Edwards, California). The Center flew the A3J-1 in a year-long series of flights in support of the U.S. supersonic transport program. The Center flew the aircraft to determine the let-down and approach conditions of a supersonic transport flying into a dense air traffic network. These flights followed two flight plans that were based upon earlier NASA Flight Research Center studies, one for a variable-sweep wing configuration and the other for a delta-wing configuration. NASA Flight Research Center test pilot William H. Dana made approximately 21 flights along federal airways that entered Los Angeles. With the completion of the research flights, the Center sent the A3J-1 back to the Navy on 20 December 1963.

The A-5 Vigilante was as ambitious as it was advanced. The company that designed the Vigilante, North American Aviation, sought to harness recent advances in jet engine technology that the 1950s had witnessed to build a very high performance, Mach 2-capable heavy bomber that could operate from the constrained environments typical of naval aircraft carriers.

After pitching the idea to the U.S. Navy, and subsequently incorporating several changes to the design, North American Aviation started work on the proposed bomber. The final product, the A-5 Vigilante, was very advanced for the time.

The large bomber made extensive use of a novel aluminum-lithium alloy for the Vigilante’s wing skin that was significantly lighter than aerospace aluminum alone. Other parts of the airframe used expensive but robust and lightweight titanium components.

The Vigilante was one of the first bombers to use electronic fly-by-wire flight controls as well as a computerized head-up type pilot display and an onboard digital computer to aid the pilot in operating the extensive onboard electronics. In recognition of both of the Vigilante’s large footprint and the limited space available on Navy aircraft carriers, the Vigilante’s wingtips, nose cone, and vertical stabilizer could fold inward, making the large jet bomber somewhat more compact.

As the Vigilante was primarily a heavy bomber, it was equipped to deliver the nuclear payload, though in an unusual configuration. The Vigilante’s two, relatively widely spaced engines allowed the large bomber to carry additional fuel as well as a Mk 28 nuclear bomb in a central, cylindrically-shaped weapons bay between them. En route to a target, the Vigilante would use the fuel stored in the cylinder bay, which would be jettisoned along with the Mk 28 bomb when at target. Through an innovative feature that helped extend the Vigilante’s range, the setup was less than reliable in practice.

Thanks to the Vigilante’s very clean lines and powerful engines, it could easily achieve Mach 2 speeds, though the A-5’s introduction coincided with a strategic shift in Navy planning. Rather than relying on manned bombers for nuclear weapon delivery, the Navy began to emphasize submarine-launched ballistic missiles instead. The A-5’s role subsequently changed from high-speed heavy bombing to high-speed after-action reconnaissance, a role in which excelled during the Vietnam War.

Although the A-5 performed relatively well, post-Vietnam budget cuts, the bomber’s high cost, as well as the introduction and prioritization of naval fighters like the F-14 Tomcat sealed the Vigilante’s fate and ultimately giving it a relatively short service life. Still, the Vigilante was an innovative heavy bomber that just came at the wrong time for the U.S. Navy.