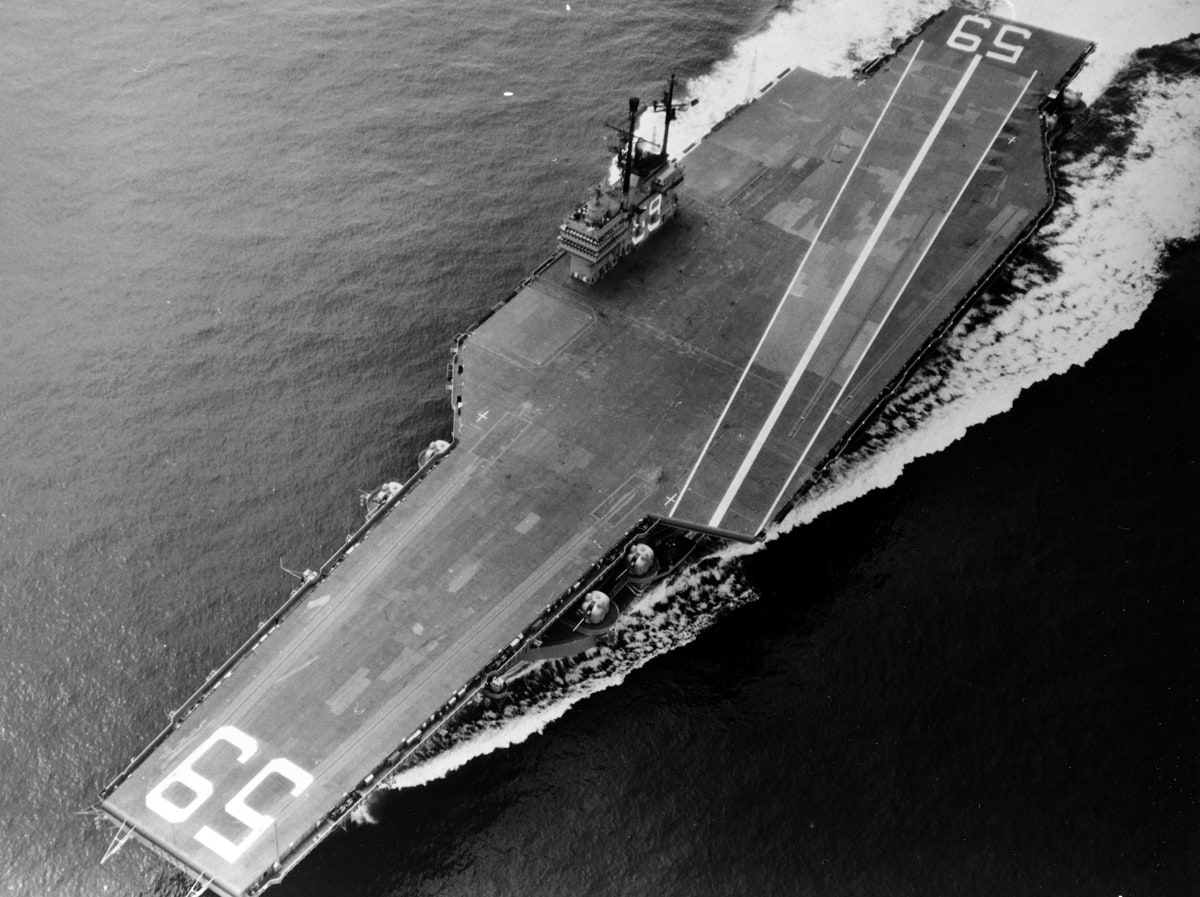 Two deadly collisions involving U.S. Navy destroyers in June and August 2017 may have cost the lives of up to sixteen sailors, leading the Navy to declare a day-long operational pause to reflect upon its safety culture. That such similar accidents took place in such close proximity reflects stresses and failings common to the maritime fighting branch.

In the 1960s, the Navy also suffered a series of deadly accidents aboard its carriers. In their wake came major reforms addressing the inherent dangers of operating ships packed full of explosive munitions, fuel and jet planes.

(Throw Those) Bombs Away!

The USS Forrestal was the United States’ first supercarrier, and the largest ever built when it was commissioned in 1955. Capable of launching larger, more powerful F-4 Phantom fighters on its thousand-foot-long flight deck using steam catapults, the Forrestal was deployed to Yankee Station in the Gulf of Tonkin in July 1967 to contribute its Carrier Air Wing 17 to the intense bombing campaign over Vietnam.

Just nine months earlier, the smaller USS Oriskany experienced a devastating fire that killed forty-four sailors and pilots, all caused by a mishandled flare which triggered rockets stored in an ammunition locker. Misfiring rockets would also prove the bane of the Forrestal, but faulty bombs were more deeply implicated in the tragedy.

The Navy was flying hundreds of missions every day over Vietnam, with its A-4 Skyhawk attack jets typically carrying one thousand-pound bomb under each wing. In just four days of combat operations, the Forrestal’s air wing flew 150 missions, many targeting the Thanh Hoa railroad bridge in North Vietnam. That operational tempo depleted the munitions stocks at an extraordinary rate, so old M65 bombs were dispatched to fill the gap.

Everyone who laid eyes on the antiquated M65A1 bombs knew they were trouble when they were taken aboard on July 28. The Korean War–vintage munitions had been improperly stowed in humid conditions for more than a decade, and were leaking liquid paraffin from the seams and coated in rust and grime due to their age. Ordnance technicians were afraid to handle them. The short, stubby bombs were armed with unstable Composition B in a thin metal casing, while newer Mark 83 bombs used the more stable Composition H6 in a thick casing. A Mark 83 bomb could endure eight to ten minutes in a raging fire before cooking off, as demonstrated in Navy instructional videos, giving firefighting crews enough time to respond.

To their credit, several officers did their best to prevent the weapons from being used. The ordnance chief at Subic Bay in the Philippines insisted that the weapons should have been destroyed, not employed, and only released them after making strenuous objections. Upon being loaded on the Forrestal, the carrier’s ordnance chiefs expressed their concern to Capt. John Beling. Beling agreed, and requested different munitions from the ammunition ship Diamond Head, but was informed that none were available. Feeling he had no choice, Beling made sure the bombs were stored on the flight deck rather in the ship’s magazine as a safety precaution.

Initially, however, it was not the bombs that sparked trouble.

At 10:50 a.m. on July 29, the day after receiving the old bombs, a Mark 32 Zuni rocket mounted on a parked F-4B Phantom suddenly ignited in its LAU-10 launcher and shot off across the flight deck. The unguided rocket was a staple weapon for ground-attack missions over Vietnam. Normally, the weapon was only primed to launch shortly before takeoff with a “pigtail” plug connecting the rocket’s circuits with the fighter. However, the Forrestal was being requested to fly so many combat sorties that plugs were inserted early to save time, an exception to procedure that had been approved because earlier missions had been delayed by faulty plugs. Most likely, a power surge while switching to the Phantom’s electrical system had triggered the weapon’s actuator.

The five-inch rocket slammed into the side of the bomb-laden Skyhawk of Lt. Cmdr. Fred White, commander of attack squadron VA-46, as he was queued up for takeoff. The blast ruptured his plane’s four-hundred-gallon external fuel tank and caused two wing-mounted M65 bombs to fall onto the flight deck. JP-5 jet fuel from the tank sprayed across the deck and immediately ignited.

The Forrestal’s damage-control team swiftly responded to the accident. However, the nearest fire pump was already wreathed in flames, and the second closest failed to generate water pressure. The crew could only rely on a single hose spooled further up deck to begin spraying the flaming bombs with water, even as the fire spread to engulf the next Skyhawk beside White, manned by John McCain, the future senator from Arizona. Seeing flames licking around his jet, McCain climbed down the nose of his plane and jumped off the refueling probe, though his flight suit caught fire upon landing.

As the bombs began to glow cherry red from the heat, the damage control team’s Chief Petty Officer Gerald Farrier attempted to cool them off with a Purple-K dry-chemical fire extinguisher. A mere minute and a half after the rocket detonation, Farrier realized that that the casings on one of the bombs had split open and the munition was about to go off. He shouted at his crew to pull back. They had just begun to do so when the bomb erupted, killing the chief and all but three of his crew, who were left severely burned. White also perished in the explosion, while McCain was blasted across the flight deck.

The explosion spattered shrapnel and burning jet fuel across the rear of the carrier, causing two more Skyhawks loaded with thousands of pounds of fuel and unstable M65 bombs to be engulfed in flames. Unlike the fire on the Oriskany, this resulted in a dreadful chain reaction of explosions, which rippled across the Forrestal. Bomb blasts gouged out great chunks of the deck, allowing up to forty thousand gallons of burning jet fuel to pour into the hangar deck and personnel quarters, trapping crew members as far as three stories below.

You can see the video records of these horrifying events in the Navy training film Trial by Fire, starting with the Zuni rocket unleashed at 3:17. At the five-minute mark, the bomb detonates. When damage control crews rush back into resume combatting the fire, they are met by two secondary explosions just thirty seconds later. Flames rush forth, sweeping them from the deck.

Flying shrapnel shredded many of the first responders, while jet fuel seared the skin off others, leaving survivors with horrifying injuries. But despite the apocalyptic inferno, the Forrestal’s crew charged into the flames to save the ship. Sailors began frantically jettisoning bombs into the water before they could go off—then, entire warplanes were pitched over before the flames could consume them. One sailor drove a forklift through fire to toss a huge RA-5C Vigilante reconnaissance jet into the ocean. The nearby destroyer Rupertus sailed to within six meters of the flaming carrier and sprayed it with fire hoses for three hours, while rescuing personnel that had jumped into the sea.

More than a dozen bombs cooked off on the Forrestal’s flight deck, nine of them within the first five minutes—including all of the M65s with their sensitive Composition B. Unfortunately, the initial blasts had effectively wiped out the two trained damage-control teams; their untrained replacements understandably made mistakes. Some sprayed seawater into the blaze, washing away more effective flame-retardant foam and causing burning jet fuel to spill through holes into the lower decks.

However, the conflagration finally came under control at 12:15 in the afternoon, though the flames would continually flare back to life, and were not fully extinguished until 4 a.m. the following morning. Meanwhile, the ship’s thirty-eight medical corpsmen were overwhelmed by the 161 personnel wounded in the catastrophe, only relieved with the arrival of the hospital ship Repose.

In all, more than 134 sailors and airmen perished in the explosions and spreading fires. The following day, McCain, interviewed by the New York Times, stated, “It’s a difficult thing to say. But now that I’ve seen what the bombs and the napalm did to the people on our ship, I’m not so sure that I want to drop any more of that stuff on North Vietnam.”

In addition to the human cost, eleven Skyhawks—nearly a full squadron—were either consumed by or pitched over the side, as well as seven of the high-performance Phantom fighters and three huge RA-5Cs. Needless to say, the Forrestal was in no shape to continue combat operations after its near-death experience, and sailed first for the Philippines for emergency repairs, then to Florida to drop off its crew, before anchoring at Norfolk for a six-month repair operation that would cost $217 million (equivalent to $1.6 billion in 2017 dollars).

Unlike the Oriskany fire, the Navy did not hold any individuals legally culpable, though Captain Beling was reassigned to administrative duties. It seems clear, however, that the decision to cut corners and employ unstable bombs and prematurely armed rockets in order to meet the high operational tempo expected by the Pentagon led to dozens of deaths.

The Forrestal fire did lead to major reforms of the Navy’s firefighting procedures, including better training in damage control for the crew at large. In the next two years, new firefighting devices that could flood the entire carrier deck with flame-retardant foam were installed. A Farrier Firefighting School was opened at Norfolk, named after the chief who sacrificed his life attempting to douse the first bomb.

Unfortunately, just six months later, history would repeat itself, and yet another prematurely fired Zuni rocket would trigger a deadly blaze on the USS Enterprise.