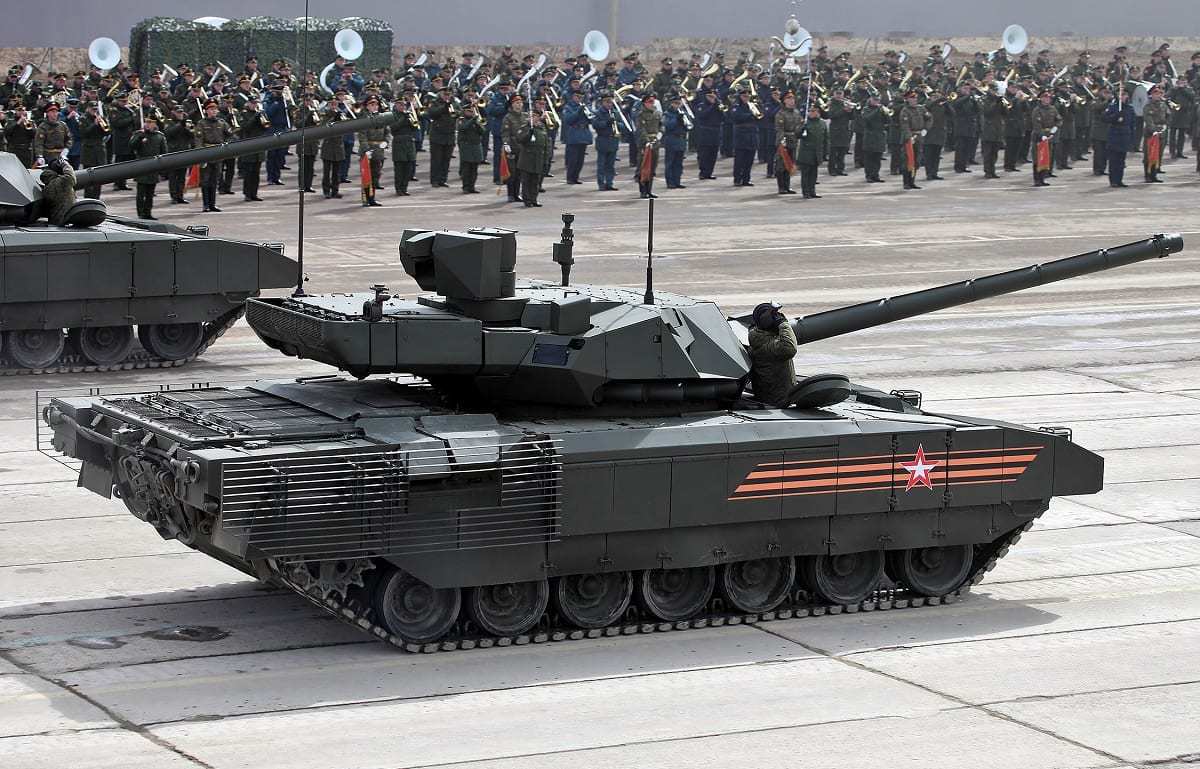 While the T-14 Armata MBT has been widely discussed, its parent platform, the Armata Universal Combat Platform has not. Initially, lofty claims were made that these vehicles would replace much of Russia’s Soviet-inherited armor, but due to higher than expected production costs, the number of units produced has remained low. Here are a few of the current or planned variants of the Armata Universal Combat Platform.

The T-15 is an infantry fighting vehicle, designed to keep up with Main Battle Tanks and bring infantry rapidly into the fight. Importantly, the T-15 is designed to be fast, and well-protected— the T-15 is readily identified by its steeply sloped frontal and side armor. Unlike the T-14 MBT, the T-15’s engine is located in the front, further protecting its estimated payload of 9 troops.

The T-15 further benefits from the overlapping active and passive protection used on the T-14, making both the T-14 and T-15 tough nuts to crack.

The first and outermost protection is the Afghanit Active Protection System that uses radar to detect and track incoming projectiles. The APS system can pop smoke to create a smokescreen between itself and the incoming projectile, or attempt to shoot the projectile down. If something manages to get past the APS, it would have to contend with Malakhit explosive-reactive armor, essentially blocks of explosives on the outside of the hull that explode outwards to disrupted the path of the projectile or make it detonate before coming into contact with its hull. The hull is well-protected, a blend of composite armor and steel that is estimated to be equivalent to between 1,200-1,400mm of Rolled Homogenous Armor.

The T-15 is no lightweight when it comes to firepower either, hence the HIFV— Heavy Infantry Fighting Vehicle designation. It appears there are several remote weapon station variations— one with a respectable 30mm autocannon, coaxial 7.62 PKT machine gun, and four improved Kornet-M antitank missiles. Alternatively, the T-15 can be equipped with a much larger 57mm autocannon and several antitank guided missile and machine-gun variants. The current direction of IFV and APC development seems to favor the 57mm for its better penetration against lightly armored targets, better defense against drones, and a higher rate of fire.

In keeping the Soviet high power-to-weight ratio design philosophy, the T-15 is nimble and has a multifuel 1,500hp engine with two externally mounted rear fuel tanks, giving it an impressive 31+ horsepower per ton (by comparison, the M1 Abrams power-to-weight ratio is 24-27hp/ton depending on the variant).

The Kurganets family comes in Infantry Fighting Vehicle and Armored Personnel Carrier variants. First seen during the 2015 Victory Day Parade in Moscow, the Kurganets-25 variants are likely intended to replace the wide variety of aging Soviet APCs and IFVs.

The Kurganets-25 has a much higher stance than its legacy Soviet predecessors it will eventually replace, which are typically much lower-profile. Outwardly, the Kurganets-25 more closely resembles the American M2 Bradley IFV or British Warrior, both of which feature higher up, more upright stances. The more upright Kurganets stance design would theoretically afford greater protection from IEDs due to higher ground clearance and may be a lesson taken from the American experience in the Middle East.

Despite its significantly less powerful 800hp engine— also located in the front of the vehicle— the Kurganets has a high 32hp/ton power-to-wieght ratio due to its lower weight.

It is amphibious as well, with a retractable wavebreaker and two waterjets that are located quite low on the rear of the hull. Although primarily a land power, amphibious capabilities would allow its crew of three plus 9 passengers to access a wider range of areas.

At least one of the Kurganets turret configurations is shared with the T-15, which simplifies manufacturing. The turret in question is an unmanned 30mm turret equipped with Kornet-M antitank missiles and would be used on the IFV variant, while the APC variant is more lightly armed with a 7.62mm remote weapons station, and does not appear to have the Afghanit Active Protection System.

The 2S35 Koalitsiya, also showcased during the 2015 Victory Day Parade, is a Self Propelled Gun (i.e. a mobile artillery) that is designed to replace the  2S19 Msta currently in use with Russian ground forces.

Although the platform is planned to be based on the Armata Universal Combat Platform, the examples seen in 2015 appear to have used the same chassis as the 2S19 Msta it is slated to replace, although the turrets were a new design.

Due to a great amount of automation, the crew has been reduced from 5 for the Msta to a minimal 3 for the Koalitsiya— just a commander, driver, and gunner. This is accomplished through the use of an autoloader, making the turret of the 2S35 longer than that of the Msta.

The main armament is a 152.4mm howitzer, similar the that of the Msta, but featuring a different style muzzle brake to reduce recoil, and internally inclosed recoil dampeners. An export version will apparently come equipped with a 155mm gun to accept more commonly available ammunition types.

As is the Koalitsiya can fire a wide variety of ammunition too, standard high explosive, antitank, jamming ammunition, as well as guided projectiles, such as the Krasnopol fin-stabilized, laser-guided artillery shell which coasts to its target using its multiple control surfaces. Maximum range estimates outclass SPGs of both the UK and the United States, possibly a high as 70 kilometers, or just over forty-three miles.

The Koalitsiya is very similar in capabilities to its predecessor— so why bother? Automation. A crew of just three would, in theory, allow for the incredible sixteen+ rounds per minute rate of fire  that the manufacturer claims is possible. If true, this would perhaps be the highest RPM of any self-propelled gun in existence. By comparison, the current American M109 SPG variant has a sustained rate of fire of just 4 rounds per minute, although an upgrade now in the works aims to increase that number to 6-10 rounds per minute, also through the use of an autoloader. A longer barrel is also being considered to walk out the 155mm howitzer’s range, as are rocket-assisted projectiles.

A crew of just three sounds great, but there has been some speculation about what would happen in the case of a misfire, which would probably require opening the gun breech manually, was are there still-unanswered questions about reliability, especially on such a fresh platform that has not yet proven itself in combat.

Ultimately, these platforms hold much promise and seem to be well designed, but are as of yet untested. Like the T-14 MBT, these Armata Universal Combat Platforms suffer most from significantly lower than planned production numbers. Until they can be produced in higher numbers, cost per unit will remain high, discouraging increased production. 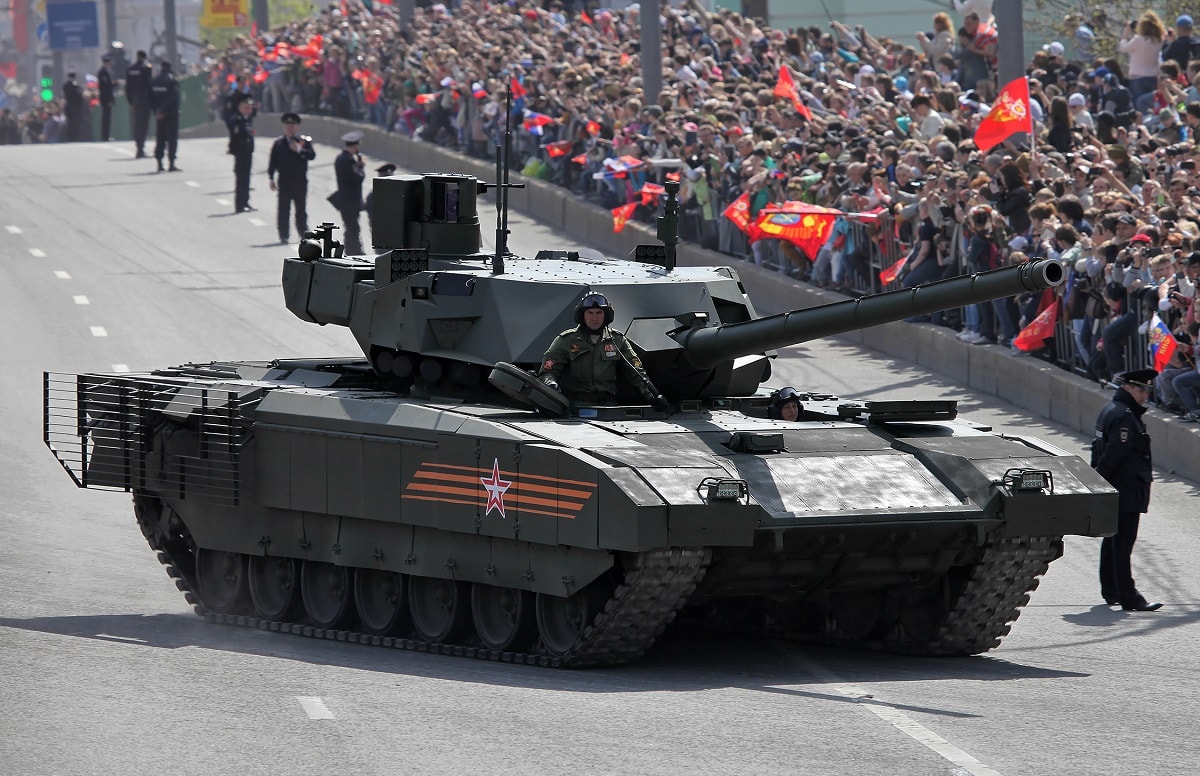