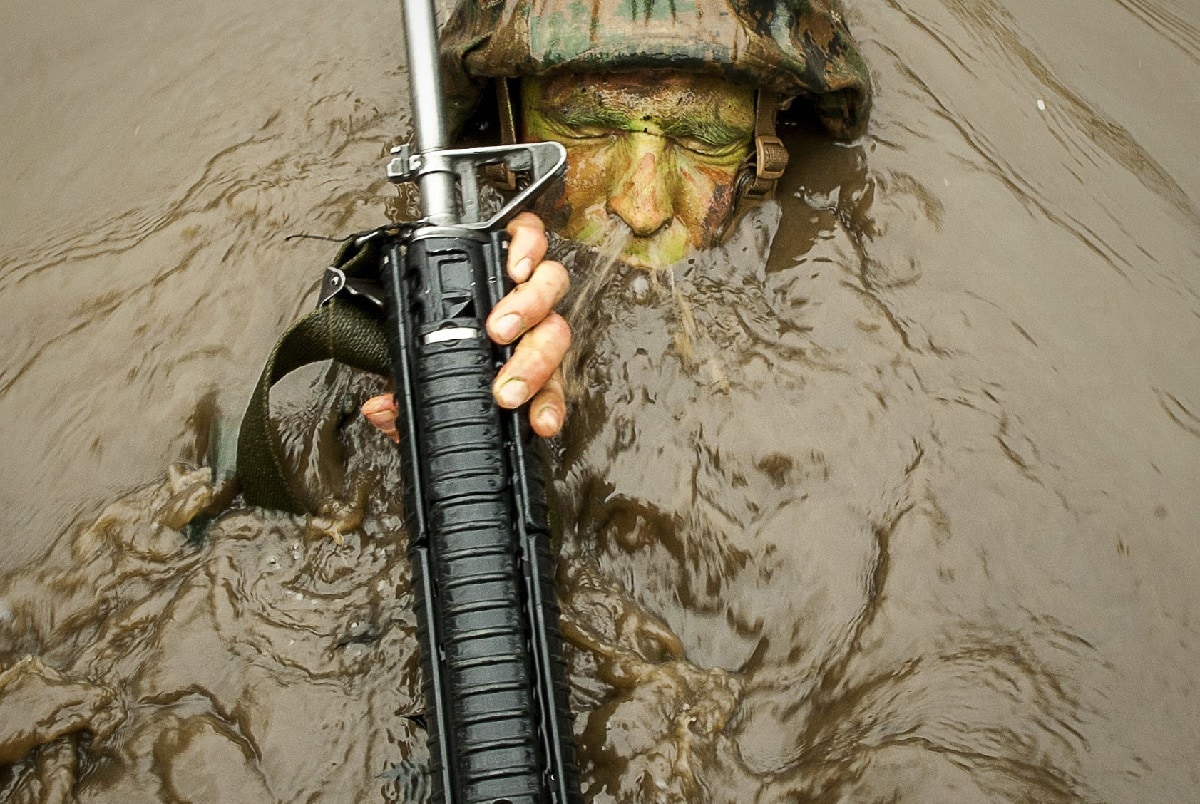 A candidate assigned to Delta Company, Officer Candidates Class-221, breaks the surface of the murky water of 'The Quigley' at Brown Field, Marine Corps Base Quantico, Virginia, on March 15, 2016. The mission of Officer Candidates School (OCS) is to "educate and train officer candidates in Marine Corps knowledge and skills within a controlled, challenging, and chaotic environment in order to evaluate and screen individuals for the leadership, moral, mental, and physical qualities required for commissioning as a Marine Corps officer."

The People’s Liberation Army Navy Marine Corps might be undergoing a deep restructuring aimed at transforming China’s Marine Corps into a multi-domain, multi-mission force better equipped to respond to a wide array of challenges. Like many nation’s Marine Corps, the PLAN Marine Corps functions primarily as an extension of naval power on land, though the scope of operations seems to be expanding.

In particular, combined arms operations, as well as operations across multiple domains, seems to be a priority for a force that has been optimized primarily for amphibious assault-type operations.

Evidence in a recent CCTV (China Central Television) report indicates that the PLAN Marine Corps has begun familiarization with the ZTQ-15, a relatively lightweight tank that is particularly well-suited to operations at extreme altitude, in environments that are endemic to the Tibetan Plateau.

Parts of the Plateau are the site of the Chinese-Indian border, an area that has seen some of the worst clashes between Indian and Chinese troops in decades. Jane’s first reported on the recent CCTV video report.

The United States Marine Corps is no stranger to combined arms operations, an approach to maneuver warfare that combines rapid and flexible combat arms (infantry, armor, artillery, airpower, etc.) in a mutually complementary way so that an enemy defending itself against one combat arm is exposed to a different combat arm.

The PLAN Marine Corps, on the other hand, has historically operated as a naval infantry assault force — an immensely important task considering Taiwan’s proximity to mainland China, though an operation that has shaped the PLAN Marine Corps’ area of operations into a single-mission force. Beijing regards Taiwan as a rogue province, and would ultimately like to reunify the island with the mainland, by force if necessary.

Though the People’s Liberation Army Navy Marine Corps has historically served as a specialized force tailored primarily for an eventual amphibious assault on Taiwan, their operational domain could ultimately expand to include the cold, high-altitude areas of the Tibetan Plateau, or even overseas operations. Like the United States’ force-in-readiness, Chinese Marines seem to be preparing to serve as an overseas extension of Beijing’s military power.