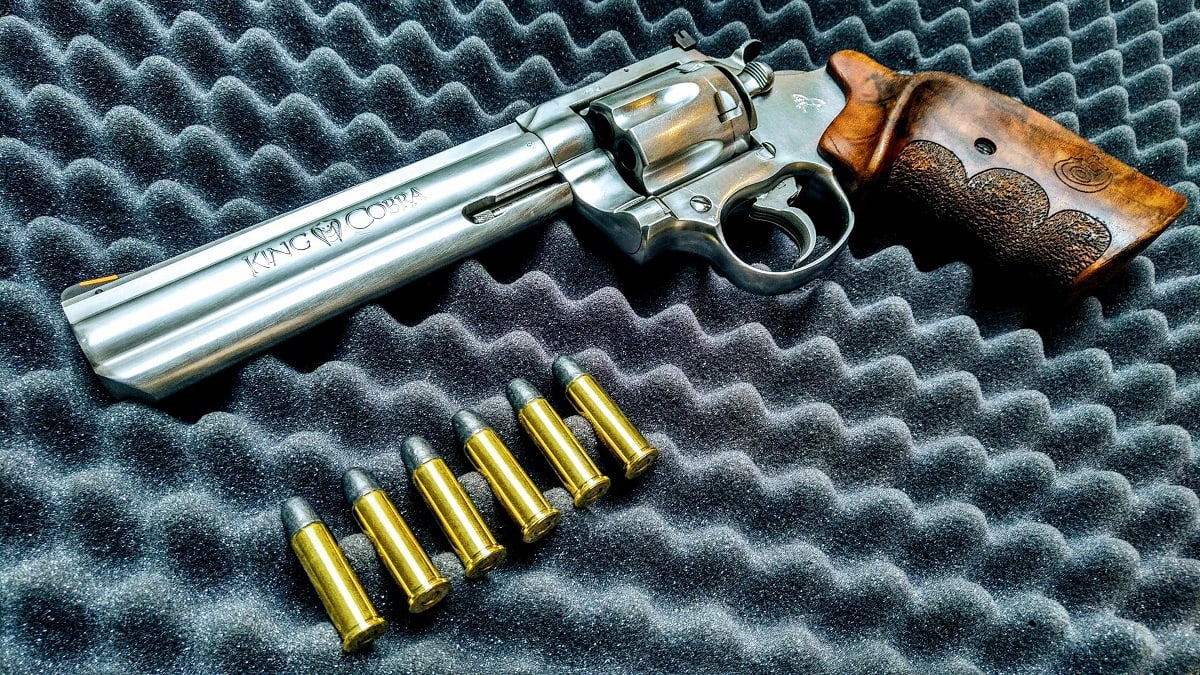 Colt is no stranger to revolvers and the world of classic pistols. Their history with cylinder-fed pistols stretches back to 1835, when Samuel Colt patented the first revolver and founded Colt’s Manufacturing Company. Nowadays, they’re still going strong with pistols like the Colt King Cobra. First produced in 1986, then 1994, Colt re-released the King Cobra in 2019, similar to Taurus’ take on Colt’s classic 1911. Colt’s King Cobra has met to critical acclaim in the past, but does the new production hold up to the earlier iterations? Read on to see how I fared shooting this pistol.

Getting a revolver for precision shooting is like getting a butter knife for a steak; you’re better off looking for a different handgun. However, the new make of the Colt King Cobra really surprised me here. This is a defense-minded handgun with a focus in close quarters, so the two-inch groupings I scored at twenty-five yards made sure I was happily surprised. The sights themselves are okay, the front having a brass bead insert and the rear a nice and polished channel.

When you get a revolver, you expect reliability and the King Cobra is no exception. I’ve owned the King Cobra for close to eight months now and I’ve fired nearly four hundred rounds and I still have yet to see a malfunction. Like always, I recommend cleaning it often to ensure peak performance, but the reliability is still second to none.

The factory grip that comes with the Colt King Cobra is a soft, rubber one. It works fine as far as I’m concerned, but it’s nothing really noteworthy. Replacing it with a wood or laminate grip might do you better, depending on your preferences. As far as actually shooting it goes, it has a sizable but controllable kick and feels really nice to fire. If you’re wondering about its use in close quarters self-defense, I was able to unholster and holster it quick and clean like all good revolvers should.

If you’re looking for a gun with a satisfying trigger pull and a good weight to said trigger, look no further. The trigger weight of the King Cobra clocks in at nearly nine pounds double-action, which gives it a weighty click and pop. I love the trigger of this gun like I love most heavy pulls on revolvers. The trigger guard itself is larger than previous King Cobras, which provides plenty of room for gloves or bigger fingers. Those looking for something with a little lighter trigger pull might want to try out the S&W’s Model 66, if you want something more newbie-friendly.

Reloading is done just like any other revolver, placing the rounds through the cylinder and putting it back in. Its capacity is six rounds like most revolvers and the cylinder is a “bank vault lock-up” which means that the cylinder doesn’t clatter around inside like some other revolvers. For those who want to shoot quickly, you can buy quick loaders for revolvers which speed up the process considerably.

The barrel is nice and short at three inches and the total length is close to eight. It weighs twenty-eight ounces which comes out to a nice 1.75 pounds. It’s a small gun but variants come with four and eight-inch barrels, if that’s more your preference. The standard smaller size certainly works better for self-defense, however.

The recoil is very manageable, given the lightweight of the gun. Don’t get me wrong; it’s a very noticeable kick and with larger rounds, it’ll make you need to take a break. However, just using .357 and .38 Special let me shoot it practically all day without any wear in my muscles. As long as you keep your grip tight, the King Cobra is very rewarding. The recoil I’d say reminds me a lot of Chiappa’s Rhino Gun, which is similar to the Cobra in many ways.

Now, the King Cobra does come in at a very large price. The MSRP is $899.00, which is a sizable investment and you can certainly find cheaper revolvers out there. This is a pretty stationary price too, as there’s little deviation towards the King Cobra getting cheaper. However, the price is worth it considering the new return of a fan favorite revolver, and it does live up to the hype. I would consider the King Cobra a worthy investment.

With the sleek finish, manageable recoil, surprising accuracy, and the satisfying trigger pull, the Colt King Cobra is a pleasant return to form for Colt. There’s plenty of semi-auto pistols for self-defense if you’d rather have one of those. However, if you feel more comfortable with a revolver for your self-defense purposes, the Colt King Cobra will suit all of your needs and then some.