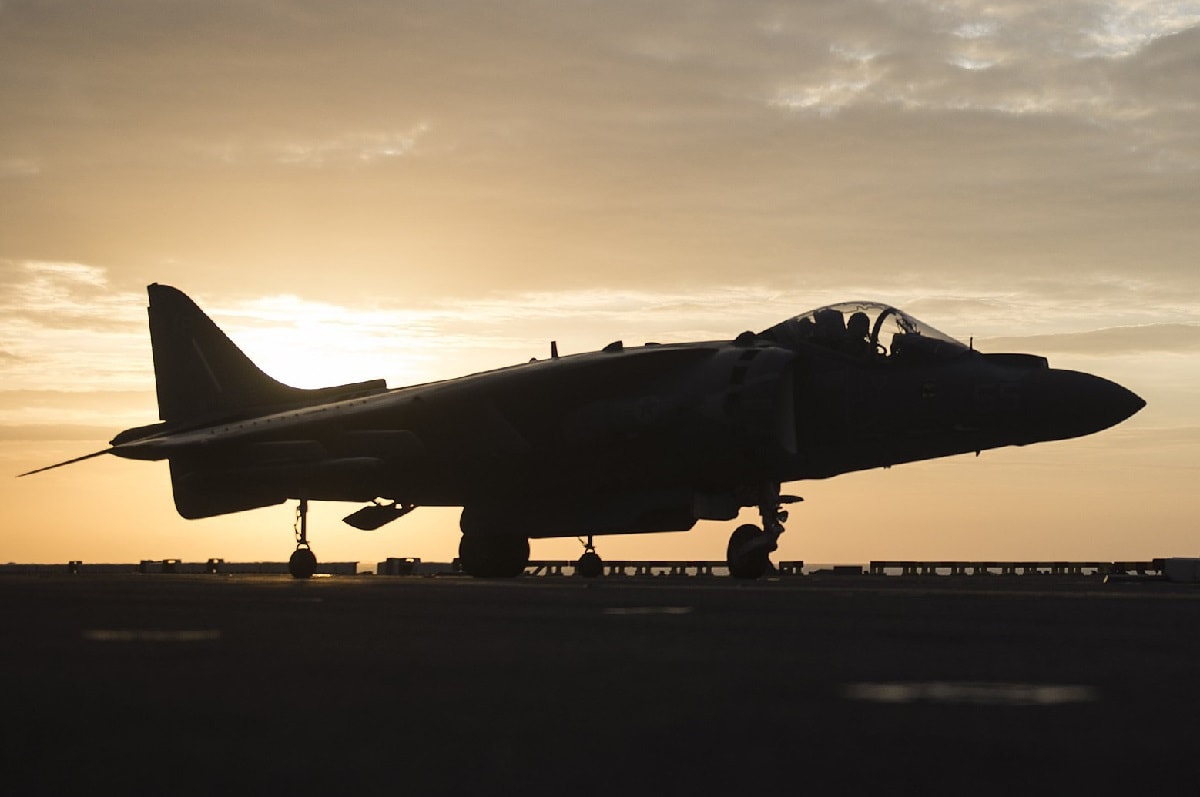 The McDonnell Douglas AV-8B Harrier stands out as one of the most recognizable – and most unique – military combat aircraft in history.

As the first successful and operational example of a short takeoff/vertical landing (STOVL) aircraft, the Harrier II’s flexibility and versatility has allowed it to fill the role of a ground attack aircraft for the United States Marine Corps very effectively for decades. While the AV-8B Harrier II approaches the end of its service life, it is still likely to remain in service for several more years.

The inspiration for the design of the Harrier as it exists today can be traced back to the 1960s era British Hawker Siddeley Harrier aircraft, making the Harrier a unique example of an American military aircraft that was adapted from a foreign design. The prospect of a STOVL aircraft – capable of taking off from and landing on amphibious assault ships and short-field runways – appealed to the United States Marine Corps, which is often tasked with operating in an expeditionary capacity without reliable access to runways suitable for more conventional aircraft.

By 1971, Harriers were in service with the Marine Corps. The American AV-8A Harrier was largely very similar to the British Harrier GR.1, and was intended to serve as multirole aircraft capable of conducting ground attack, close air support (CAS), reconnaissance, and air-to-air operations, and these original Harriers were equipped with an array of munitions to facilitate such versatility, including AIM-9 Sidewinder guided air-to-air missiles and unguided air-to-ground munitions such as rockets and general-purpose bombs.

The AV-8A was relatively limited in its capabilities, however, and the Marine Corps quickly began searching for a way to improve on the initial model. By the mid 1970s development began on what would become the Harrier II, and in 1981 production of what was designated the AV-8B Harrier II was underway. This updated model – which offered a number of improvements over the original AV-8A, such as the incorporation of the AN/ASB-19 Angle Rate Bombing System (ARBS) and the AN/ALR-67 radar warning receiver (RWR) – quickly replaced older models in the Marine Corps’ fleet. The most recently developed variant of the AV-8B – dubbed the Harrier II+ – was first introduced in 1993, and features a more powerful engine and improved radar and avionics, and is also more capable of operating both at night and in adverse weather conditions than its predecessors.

The AV-8B is powered by a single Rolls Royce 23,400-pound thrust F402-RR-408 turbofan engine, and possesses a max speed and altitude of 647 mph and 38,000 feet, along with an effective range of 2,416 miles. The AV-8B is equipped with a 25 mm GAU-12 cannon and six wing hardpoints that allows the aircraft to carry up to 4,200 kg of worth of weaponry, including the AGM-65E Maverick laser-guided ground attack missile, Joint Direct Attack Munition (JDAM) satellite-guided bombs, and the GBU-12 and GBU-16 Paveway laser-guided bombs. 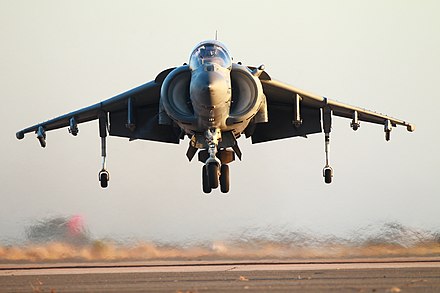 An AV-8B Harrier hovers over the flight line during the Marine Corps Community Services (MCCS) sponsored annual Air Show on Marine Corps Air Station (MCAS) Miramar, San Diego, Calif., Oct. 13, 2012. The MCAS Miramar Air Show showcases not only the aerial prowess of the Armed Forces but their appreciation of the community’s support and dedication to the troops. (U.S. Marine Corps photo by Cpl. Jamean Berry/Released)

The Marine Corps currently operates 124 AV-8B Harrier II aircraft, the last of which was delivered in 2003. The service has plans to continue to upgrade the capabilities of its Harrier fleet, including software upgrades as well as upgrades to the aircraft’s avionics and weapons systems. The Marine Corps plans to replace its inventory of AV-8B Harrier IIs with the fifth-generation F-35B, the STOVL variant of the Lightning II program. Some elements of the Marine Corps’ aviation fleet will complete transition to the F-35B as soon as 2023, while other elements will continue to operate the AV-8B until as late as 2028.