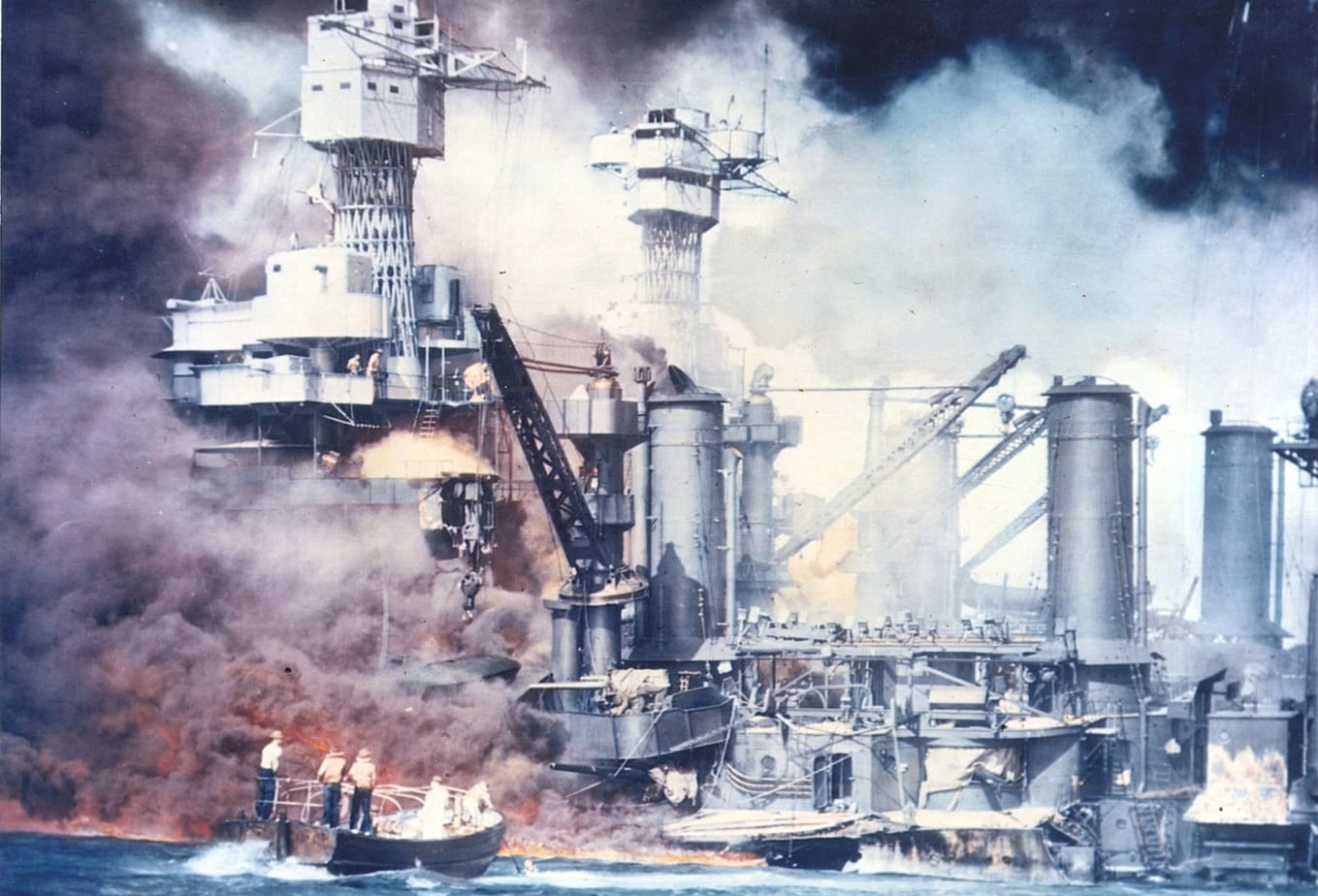 At 7:45 AM on the morning of December 7, 1941 Commander Mitsuo Fuchida gazed exultantly from the rear seat of his B5N bomber at the serene vision of Pearl Harbor below him, it’s defenses unprepared for the onslaught about to befall them. He then rolled back his bomber’s canopy and fired off a dark blue “black dragon” flare, signaling for the 182 combat aircraft behind him to press the attack.  Minutes later he exuberantly radioed the message “Tora! Tora! Tora!”

Over the next two hours, Mitsuo circled overhead the devastated naval base as the first wave was followed by a second wave of 171 aircraft. He witnessed the strike’s unprecedented success: sinking four battleships and destroying over 100 warplanes on the ground.

Upon returning safely to the deck of the carrier Akagi, he and classmate Commander Minoru Genda—the raid’s mastermind—then urged Admiral Chuichi Nagumo to authorize a third wave to finish off the already crippled defenses. Genda had originally planned for such a third attack.

Fuchida described the moment his article “I Led the Air Attack on Pearl Harbor” published in Proceedings in 1952:

“Discussion next centered upon the extent of damage inflicted at airfields and air bases, and I expressed my views saying, “All things considered we have achieved a great amount of destruction, but it would be unwise to assume that we have destroyed everything. There are still many targets remaining which should be hit. Therefore I recommend that another attack be launched.”

But Nagumo insisted on sticking to plan, and Pearl Harbor was spared even greater destruction.

There’s a little problem with Fuchida’s account, though. Genda denied such a debate ever occurred—and Fuchida himself has a track record of tall-tales or apparent dishonesty.  However, it does seem that several of the Japanese carrier commanders did have contingency plans ready for a third strike if it was ordered—even though a third wave was never in the original plan.

Regardless of the accuracy of Genda’s account, it raises an unavoidable historical “why’ and “what-if” question? Why didn’t Nagumo press his advantage with a third strike? Would such a strike have changed the course of the Pacific War?

A third wave could have hit the vulnerable fuel tank farms and repair facilities of the U.S. Pacific Fleet. Had those been put of action, then the U.S. Navy would have had a much harder time recovering from the powerful blow dealt it on December 7.

Admiral Chester Nimitz, commander of the Pacific fleet throughout most of World War II, claimed that doing so would have delayed an American counteroffensive by an entire year, and prolonged the war by two years.

As it was by June 1942, the U.S. Navy was ready to go on the offensive. It lured Japanese carriers into at the Battle of Midway, sinking four Japanese carriers, including the Akagi, for the loss of one.

Two months later, Marines on the Japanese-held Guadalcanal in the Solomon Islands. From then on, there was nothing but non-stop defeats for the beleaguered Imperial Japanese Navy.

But Nagumo had several factors to balance on the morning of December 7. Organizing a third strike would have taken additional hours to refuel and reload his warplanes, and they might well even have to somehow land at dusk. Already, U.S. defenses had shot down more than twice as many aircraft of the second wave than the first—and would likely be better prepared for a third.

Meanwhile, the six carriers deployed to the raid might be located and attacked by U.S. bombers. Most worrisomely, Nagumo knew that the U.S. carriers that he had hoped to attack were not present at the Harbor, meaning they were roving the seas and presented a deadly potential threat to his force. Indeed, the USS Enterprise lay only 200 miles away from Pearl Harbor when the attack struck, and her dive bombers dueled Japanese warplanes involved in the strike.

To top it off, Nagumo’s task force was already operating at the very edge of its fuel supply in executing the Pearl Harbor strike and lacked the logistics to tarry much longer so deep in the middle of the Pacific Ocean, far from reinforcements.

The Japanese had thought that the Pearl Harbor raid might easily cost them two aircraft carriers. Having escaped nearly unscathed, Nagumo probably figured he should quit while he was ahead.  Admiral Yamamoto supported Nagumo’s decision on December 8 but later admitted it was the wrong call.

With hindsight, we know that only one U.S. aircraft carrier was close enough to attack—and would likely not have come out ahead in a six-on-one duel with Nagumo’s taskforce. We know that the bomber squadrons on Oahu had suffered catastrophic losses and probably lacked the firepower to seriously damage the Japanese fleet.

We know that U.S. Pacific Fleet would rebuild its combat power with impressive speed and that many of the battleships sunk into the harbor were restored into operational condition.

We know that Japan’s expectation that the U.S. would be discouraged by the stinging defeat and lack the will to launch a counteroffensive in the first place was badly misjudged. The IJN probably needed to strike the American threat harder to buy the Army more time to solidify its hold on Tokyo’s real objective: oil production facilities in the Netherland East Indies.

But Nagumo couldn’t know all of these things. He acted reasonably and prudently to avoid assuming additional risks by exceeding his mission. But in this case, the reasonable choices happened to be wrong the call.

Of course, the most prudent course for Imperial Japan would have been to avoid war with the United States entirely, as Admiral Yamamoto had originally counseled the Japanese government. The U.S.’s much larger industrial base meant it would eventually have made up the difference had an even more destructive attack on Pearl Harbor been executed.

The resulting conflict might just wall have resulted in even greater destruction and loss of life than the version of World War II recorded in our history books.

Sébastien Roblin holds a Master’s Degree in Conflict Resolution from Georgetown University and served as a university instructor for the Peace Corps in China. He has also worked in education, editing, and refugee resettlement in France and the United States. He currently writes on security and military history for War Is Boring.
In this article:History, Imperial Japan, Military, NotHome, Pearl Harbor, US Navy, World War II