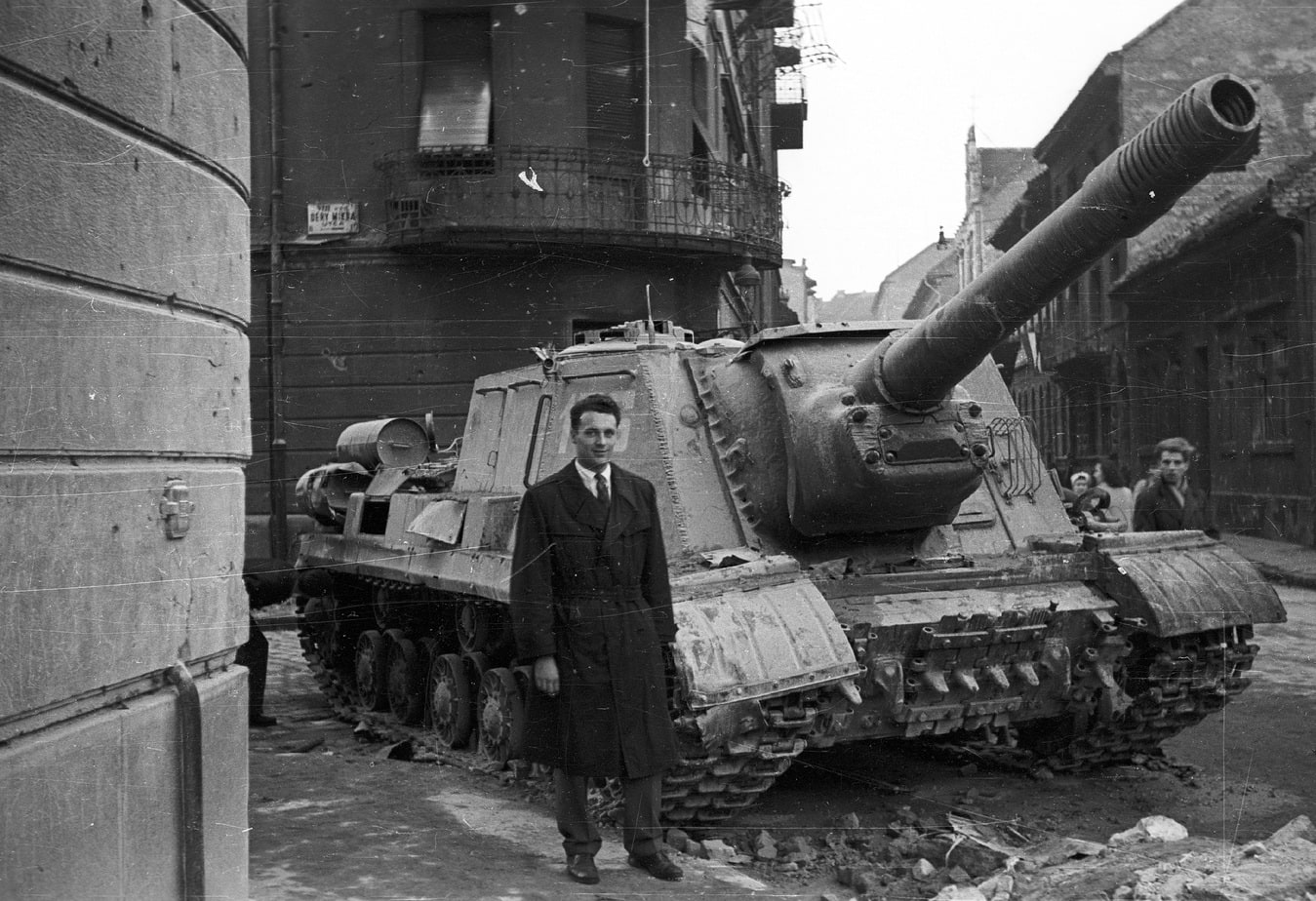 Legend has it that on September 28, 1918, a wounded Private Adolf Hitler lay in the sights of Henry Tandey, a British soldier who would receive the Victoria Cross for his daring actions in engagement in Marcoing, France.

Tandey supposedly took pity on the limping German soldier, who nodded in gratitude and made his escape.

While historians believe this incident was fabricated by Hitler himself, the apocryphal legend nonetheless poses a provocative question: how differently might world history have turned out with just one more pull of the trigger amidst the senseless slaughter of World War I?

In other words—was World War II bound to happen due to larger economic and political forces? Or was it uniquely a product of a monstrous yet charismatic leader bending the streams of history in his wake?

Would the Nazis have risen to power without Hitler?

The Nazi party’s earlier incarnation was the German Worker’s Party (DAP), founded by a locksmith named Anton Drexler. In fact, Hitler was originally assigned by German Army intelligence after World War I to infiltrate DAP, but ended up a convert and became party leader in 1921.

Therefore, a working-class far-right party was likely in the cards for Germany even without Hitler, carried by the same currents of economic distress and revanchist anger that the supposedly “undefeated” Imperial Germany had been “stabbed-in-the-back” by surrendering in World War I.

But on the other hand, there’s decent evidence that the Nazi’s rise to power came from unusual circumstances tied to Hitler himself. That’s because even with Hitler, the Nazis received only 37 percent of the vote in the 1932 election.

Most Germans (53 percent) reelected general and statesman Paul von Hindenburg, who was supported by German center-right- and center-left parties, into the presidency. Despite personally disliking Hitler, the 84-year-old Hindenburg struggled to form a coalition and was eventually convinced to appoint Hitler chancellor. Following a staged attack on the Reichstag, Hitler then persuaded Hindenburg to dissolve the Reichstag, allowing Hitler to rule by decree.

Thus, the Nazi accession to power grew not out of irresistible popular support, but peculiar political factors that might have played out differently without Hitler in the picture.

Without Nazis running the show, would Germany have begun its military campaigns in Europe?

Probably not on the short term.

Undoubtedly, there was a sentiment that Germany had been ill-treated by the treaty of Versailles (though Germany paid only one-eighth of the reparations owed before the rest were waived in 1932), and many of the old elite welcomed Hitler’s focus on rebuilding German military power.

The military especially believed Germany deserved to regain her status as a great power and advocated a more militarized and authoritarian society. Technocrats in the Germany Army secretly fostered the development of tanks, ships and warplanes restricted under the treaty of Versailles in the 1920s (ironically, with Soviet assistance)—years before Hitler’s rise to power.

However, the Wehrmacht’s senior leadership believed Hitler’s wars were impetuous and some even plotted coups against Hitler. It was not so much that they opposed foreign conquest principle, but rather believed Germany needed six to ten more years to build up its forces.

Germany, therefore, was likely to reemerge as a military power, but not necessarily at the breakneck pace the Nazis pushed it to.

A Germany without Nazis in charge might still have turned to militaristic nationalism. Contentious border territories—the Sudetenland in Czechoslovakia, and the geographically awkward Polish corridor—would have remained potential flashpoints.

But political winds might also have steered the Republic on some less destructive path.

France and the UK’s response to Hitler was muddled by their preoccupation with the threat posed by Stalin’s Soviet Union. Even during the Munich crisis of 1938, Paris and London turned down an offered alliance from Moscow—fearing the Soviets more than the Nazis.

Indeed, some historians dubiously allege that the Soviet Union was bound to invade Germany instead.

Stalin undeniably was down for opportunistic invasions. He collaborated with Hitler in the occupation of Poland in 1939, went on to invade Finland that winter, and then seized the Baltic states and the Romanian province of Bessarabia.

But Stalin preferred to pick on vulnerable countries without backing from strong allies. There’s good reason to question whether the pre-World War II Red Army could have posed the same threat as the Nazi German war machine. In the 1939 Winter War, over a half-million Soviet troops backed up by thousands of tanks and warplanes struggled to defeat smaller, lightly-armed Finnish troops, suffering over 300,000 casualties. Given this underwhelming performance, it’s hard to believe that Stalin would perceive the Red Army as ready for a showdown with western Europe.

What about China and Japan?

For over one-sixth the planet, World War II began not in September 1939, but rather in July 1937, when Imperial Japan embarked on a second, larger-scale invasion of China following an earlier campaign in 1933.

The spirit of militaristic nationalism then prevalent in Tokyo had risen in reaction to European colonialism, not fascism. Therefore, Japan’s invasion of China would likely have still occurred. This might still have led to the imposition of a U.S. embargo on petroleum that led Tokyo to plan the Pearl Harbor attack.

But historically, the trigger for the U.S. embargo was Japan’s invasion of French Indochina—an incursion unlikely to have occurred had France not just been defeated by Germany.

Indeed, Japan’s strategic calculus in 1940–41 would have been very different without a war in Europe. The Pearl Harbor raid was meant to buy time for Japan’s capture of British and Dutch territories in Asia—particularly the oil fields in the Netherland East Indies.

Had Tokyo balked at taking on the full might of the UK as well as the United States, it might have instead entrenched itself more deeply in China and developed the economic strength of its planned multinational empire, the Greater Asian Co-Prosperity Sphere. This might have prolonged Japan’s occupation of Korea and parts of China, and fostered closer Japanese ties with nationalists in Thailand and India.

At the start of World War II, there were six great powers with multinational spheres of influence: the United Kingdom and France with their vast colonial empires in Africa and Asia; Germany, dominant in Central Europe; Japan and its growing Asian/Pacific empire; the Soviet Union, with influence on Europe and Central Asia; and the United States, then withdrawing from colonial adventures in Latin America and the Philippines.

World War II destroyed Germany and Japan as great powers. The UK and France were left a shadow of their former selves. The USSR and the United States both emerged as formidable military powers with footholds in Europe and Asia.

From this titanic reshuffling of global order eventually arose the United Nations, the state of Israel, NATO and the Warsaw Pact, the conversion of European colonial empires into independent nation-states, and the sundering North and South Korea.

Without the Second World War, numerous world-changing technologies from chemotherapy and rocketry to the nuclear bomb would have developed at different times and places. Movements affected by social changes wrought by the conflict, such as the Civil Rights movement or Indian independence, would have taken different turns.

Without Hitler implementing his genocidal theories, its possible the massacre of millions of Jews and other minorities in the Holocaust would have been averted, even if anti-Semitism itself would still have persisted. Perhaps the Weimar Republic might have avoided Nazi Germany’s descent into militarism and authoritarianism.

But the world would still have been bound to experience massive conflicts, arriving at different places and times but resolving familiar tensions between capitalism and communism, colonialism and national independence, and nationalism and internationalism.

How those conflicts might have played out differently we can only guess—but it’s safe to say that the alternate history version of “We Didn’t Start the Fire” still would not have lacked for lyrical content.