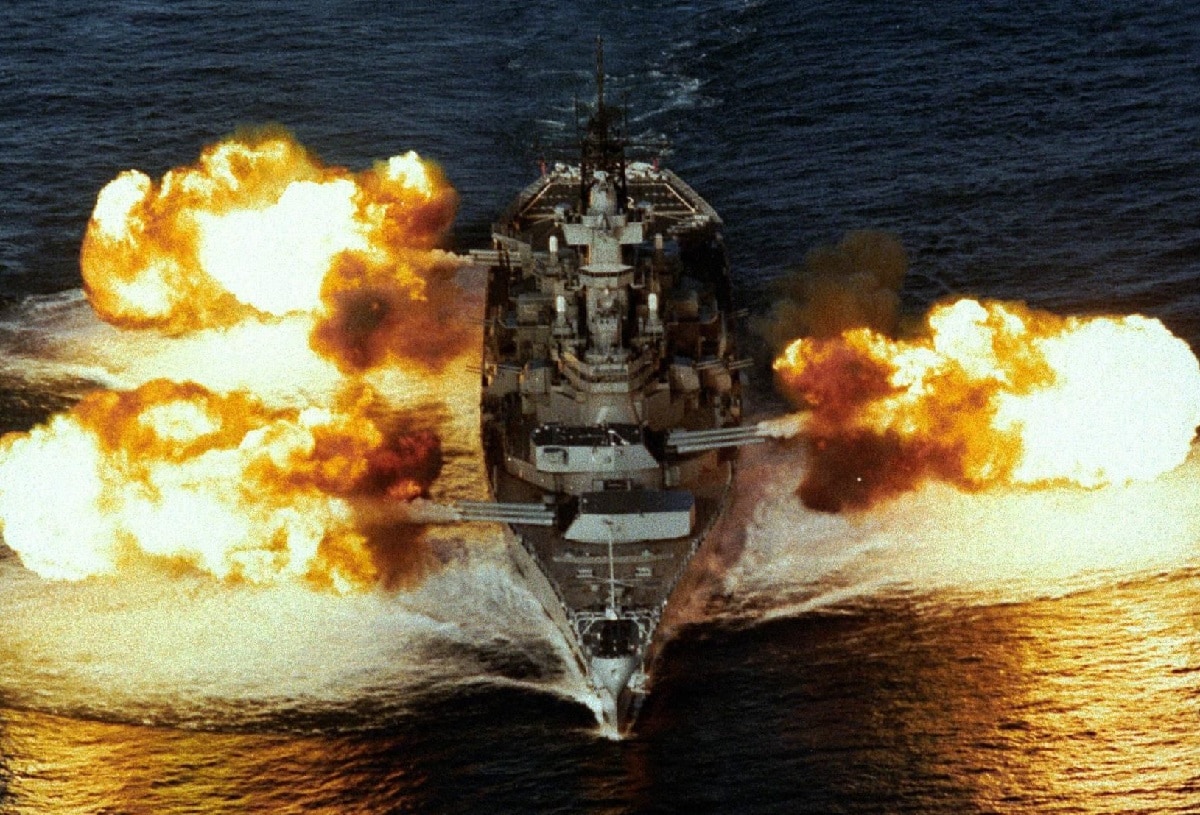 If the film Under Siege were made today it would be a lot less exciting – as the centerpiece of this “Die Hard at Sea” story involved rogue operators hi-jacking the USS Missouri (BB-63) to steal its Tomahawk long-range cruise missiles and sell them on the black market. Today the best that any team of highly trained mercenaries would get would be some toys from the gift shop.

That’s because, along with the other three Iowa-class battleships, USS Missouri is now a floating museum. It was decommissioned on March 31, 1992 – the same year the film came out – and struck from the Naval Vessel Register in early 1995, before being donated to become a museum ship at Pearl Harbor – as a matter of note another museum ship, USS Alabama (BB-60) stood in for the USS Missouri in the film.

However, the fact that a warship built in World War II would be the centerpiece of a film that involves the theft of nuclear weapons in the post-Cold War Era actually highlights how versatile the Iowa­-class actually was. Six of the fast capital ships were ordered, and four were constructed– including the lead ship of her class, USS Iowa (BB-61) along with her sisters USS New Jersey (BB-62) and USS Wisconsin (BB-64). Two additional ships, the planned Illinois and Kentucky were laid but canceled with both hulls scrapped.

Yet, even as the Second World War marked the end of the “Age of Battleships,” all four ships remained on the Naval Vessel Registry while all older U.S. battleships were decommissioned.

The class improved upon the earlier South Dakota-class, with more powerful engines and longer-caliber guns that offered far greater range. More importantly, the Iowa-class were designed as “fast” battleships that mixed speed and firepower and this enabled it to travel with a carrier force. While sleek in design, these battleships were actually constructed so as to be able to travel through the Panama Canal, which enabled the warships to respond to threats around the world.

It was aboard the USS Missouri, where in September 1945 the Emperor of Japan officially surrendered and ended World War II. That could have marked the end of this class of warships, and for a while it actually did. By the outbreak of the Korean War, only the USS Missouri remained on active duty. During the war, her three sisters were reactivated and provided naval gunfire support. While the range of the 16-inch guns was limited to just 20 miles, the warships operated on both coasts and that put a quarter of the Korean peninsula within range.

Following the war, all four ships were decommissioned – with the USS New Jersey briefly being called up during the Vietnam War – until the 1980s when President Ronald Reagan called for a 600-ship U.S. Navy. All four of the ships were reactivated and upgraded with new combat systems that replaced the many of the ships’ smaller five-inch guns with a launcher for Harpoon anti-ship missiles, 32 Tomahawk cruise missiles and four Phalanx close-in weapon systems (CIWS) – the latter is seen in use in the aforementioned Under Siege film.

By the end of the decade of excess the Cold War was nearly won, and the horizon was setting for battleships. Iowa and New Jersey were actually in the process of being decommissioned when Missouri and Wisconsin were deployed to the Persian Gulf as part of Operation Desert Storm, where they launched Tomahawk missiles at Iraqi targets. Both ships conducted naval fire missions to convince the Iraqi Army that the coalition forces would engage with an amphibious assault, tying up thousands of Iraqi units.

But by 1992 the sun finally set on the Age of the Battleship, and all four were converted to museum ships at Pearl Harbor, Hawaii (USS Missouri), Los Angeles, California (USS Iowa), Norfolk, Virginia (USS Wisconsin) and Trenton, New Jersey (USS New Jersey).

One of the reasons that the ships were converted into museums, yet not altered in any way that would impair their respective military ability, is because theoretically each could be reactivated for service if the need came. While there have been calls for the battlewagons to return to the sea, for now, their job is simply to help preserve the memories of the sacrifices made by those who served and to highlight the history of the American battleship.